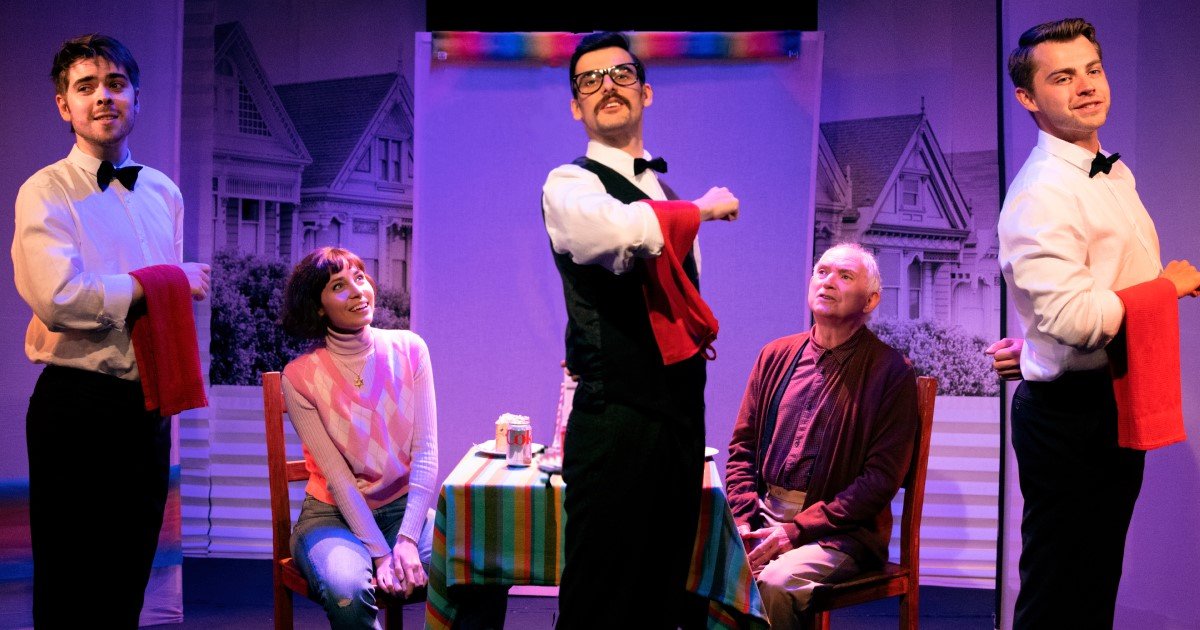 If there is one thing A letter to Harvey Milk beyond reproach is pure topicality, even in a story set a generation ago. The show explores the (mis)use of firearms in society as well as prevailing negative attitudes towards LGBTQ+ people and anti-Semitism. It quickly becomes clear that, as there is still work to be done on these issues in 2022, a show set in 1986 San Francisco is something of an indictment of where we are today.

Harry Weinberg (Barry James), widower and retired kosher butcher, is at the Jewish Community Center (“center” not “center”, this is USA), where he is a regular visitor. A creative writing “class” (again, “class”, not “course”) is getting started, led by Barbara Katsef (Josselyn Ryder) – he has no particular interest in getting into it. writing, but she manages to persuade him to join the class anyway. There are weekly “homework” – not “task” – to complete, each of which (what a surprise) involves writing about something. One of the missions is to write a letter to a deceased person. Harry decides to write…a letter to Harvey Milk.

Who Harvey Milk (1930-1978) (Joshua Anthony-Jones) was is unclear to those, like me, who didn’t already know, until well into the second half. Milk ran for City Supervisor of San Francisco – the musical does not state, to the best of my recollection, exactly when, although he was assassinated while in office, in 1978, by a fellow supervisor (there are eleven in total) who carried so much hate that he somehow saw fit to kill Milk as well as the town’s mayor, George Moscone. Milk was the first openly gay man to be elected in California, and Harry (as this musical goes) maintained a good friendship with him for a few years.

On reflection, the narrative is not as watertight as it first appears. Harry has the opportunity to explain, for example, how his personal recollection of the Nazis’ use of the pink triangle in the concentration camps to identify gay men meant he didn’t like seeing it forty years later. , even reused as a symbol. of protest against homophobic acts. A similar opportunity to explain why she thinks what she thinks is not offered to his late wife Frannie (Carol Ball). It’s bad enough that there’s a ghost in the house, let alone a ghost obsessed with Harry not telling Barbara that he didn’t tell Frannie when she was alive. It’s not, I have to stress, an affront to Ball, who plays the character brilliantly, but I felt Frannie’s presence was entirely superfluous.

The night truly belongs to Ryder, whose soprano voice is a delight to listen to whenever it’s allowed to soar, which often isn’t enough. This was a ninety-minute non-intermission production when it played off-Broadway: here the point at which the interval (as we call it in Blighty) occurs seems a bit odd because the second half begins precisely where the first half ended, as opposed to the start of the next scene. A little mild humor in a restaurant scene lightens the mood somewhat. The set is largely kept behind translucent screens – I’m still not sure why they were somehow hidden, given the progress of the gay liberation movement.

It’s an ambitious show, and perhaps could work best just for two between Harry and Barbara, especially in the relatively intimate setting of the Waterloo East Theatre. Some food for thought comes from the plot twists in a complex yet accessible spectacle that explores different facets of public stance.

San Francisco. 1986.
When Harry, a kind but lonely retired kosher butcher, takes on a writing assignment to write a letter to someone from his past who has died, he is not writing to his late wife Frannie but to Harvey Milk, the California’s first openly gay political leader.

Barbara, her young lesbian writing teacher at the senior center is stunned. Harry’s letter sets off a series of shocking events that neither of them could have foreseen.

With its soaring score and deeply felt, surprisingly funny lyrics, this musical deals with the issues of friendship and loss, the grip of the past and the hard-earned acceptance set in motion by the most unexpected.