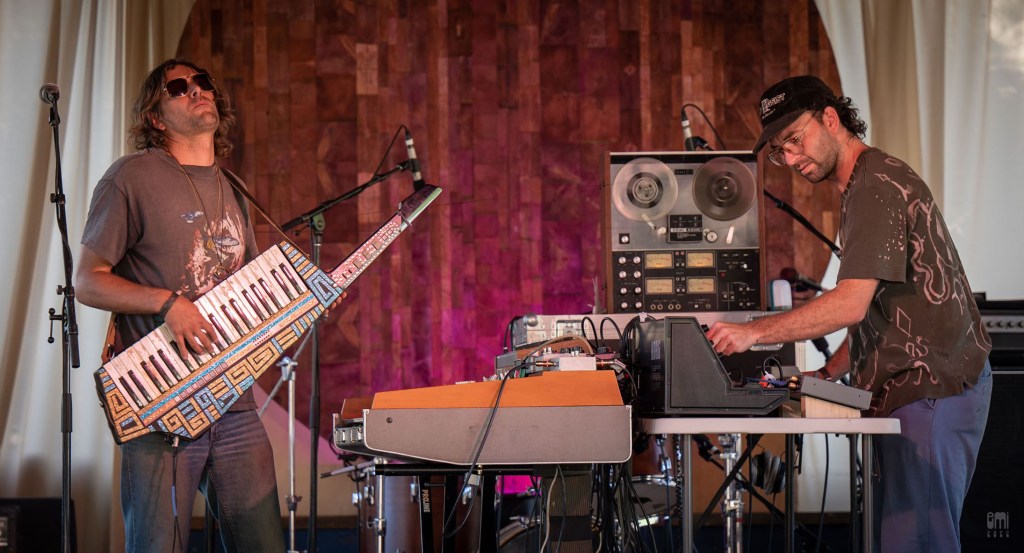 Nico Georis, 40, is an intrepid musical explorer. A bit of a stylistic chameleon. And a quintessential California renaissance man. I’ve enjoyed watching him grow in his ideas, both solo and with a group of friends who are also taking the path less traveled. His ideas tend to be based on a bohemian and endlessly creative curve, a trait he acquired largely from his parents Gaston and Sheila Georis.

From Carmel/Big Sur to Paris to New York and San Francisco, he took the learning process seriously at every stop and reached a point where he finally felt at home in his art. His restless gypsy nature has taken him south to Ojai and Los Angeles for now, where he feels he can connect with a like-minded musical community.

Prior to moving, he spent the last 10 years in Big Sur and surrounding local areas where his parents had a home. He is happy to be present during the last period of his father’s life.

On Thursday, he returns to Big Sur at the Henry Miller Memorial Library to perform the music he composed on the bones of minimalist composer Terry Riley’s famous 1969 instrumental piece “A Rainbow in Curved Air.” He will also perform his “Music for Slot Machines”. It’s going to be quite a production, as is often the case when Georis puts on a program. It’s as much a “happening” as a concert, with multimedia aspects of films and liquid light shows, and several other experimental musicians performing before his headlining set which also includes his musical compadre TP Dutchkiss and visual artist Erren Franklin’s live 8mm. film screenings. Supporting artists Jake Padorr, Yialmelic Frequencies and MatthewDavid complete the program which will culminate with DJ sets by his production company Milky Way Radio and friends.

“I always thought it was an impossible piece of music to cover,” Georis said in a phone interview with Ojai. “I never dreamed of doing a cover of it. Britt Govea’s Folk Yeah! did a record-breaking 50th anniversary event in San Francisco. Terry Riley came out and played it live with his son.

“I went to this show at The Chapel. Within this simplified framework, I was able to hear the riff that was at the very center of this piece of music. Everything was kicked out of that riff. I was able to understand the starting point he had. I saw the bones. I came home and felt like I had Rainbow disease. This riff just kept going through my head and it was really fun to play and I became obsessed with playing it. The more I played it, the more I made my own discoveries, but I actually came across things that sounded like what it was doing. And it lasted, now it’s been a few years. I just went deeper and deeper into this really amazing piece of music and then went into the studio and recorded it.

Big Sur’s concert is the first in a series of 10 to 12 shows he will be touring as a preview of the July 29 Global Music Online release date. He will sell CDs and vinyl of the recording at his shows which will take him to Shasta, Portland, Seattle, Marin, San Francisco, the Grass Valley area, Ojai and two shows in Los Angeles. He could go back to Monterey. The Henry Miller Library event is the only one to feature the full range of musicians and visual artists here, so it’s a really special offering, as he explains.

“It’s a different way of listening to music,” Georis said. “He’s not an egocentric leader engaging the crowd with ‘How are you feeling tonight? Everyone’s cheering kind of going out and seeing live music. It’s more like this emporium of sounds that has an effect on your nervous system and your brain. A very cool space, especially at Henry Miller’s with the redwoods. It’s gentle on your mind and yet not boring or boring. The music we make is a performance I won’t probably never again. It took two years to create this extremely rare piece of super special music from an internationally acclaimed Californian composer. Seeing it live is rare and with the visuals it will be very beautiful. Honestly, this is the most unique unique piece of music I’ve ever played. I’m going to do it for this tour and that’s it, so don’t miss it. I’m going to do something else after that.”

Some of the previous projects he has worked on include his high school days playing with his cellist pal Rushad Eggleston. I booked The This and That Quartet (acoustic jazz) at the Big Sur Jazz Festival and that’s where I first met him, maybe 20 or more years ago. In Paris he made impressionist piano music, in New York he and his friends formed Palo Colorado, an electrified This and That Quartet, the same guys. Additionally, he has played in eight different bands, playing everything from hip hop to afrobeat and folk music to rock and roll.

His return to California and the Bay Area was to write songs and rock in Sky Country. He described the music as California rock, with surf music and desert vibes. He produced a backcountry music festival Big Sur Nacarubi for four years, then he turned to his thing with Milky Way Radio. And then he did the experimental Plant Music that he still incorporates into his compositions and now he’s back to do his solo work with this ongoing project. Here’s how it’s described on its Soundcloud promotional streaming page.

“By removing the production tricks used on Riley’s original recording (just intonation, mirror image delay, half-speed tracking of all the main parts), Nico Georis confronts the central seven-beat theme with a new transparency which gradually turns into an intricate and amazing Persian patterned display of musical consciousness carpet…. It’s similar to the original but the rhythm is much less manic, much more listenable.

Sounds pretty cool, huh? The event runs from 6-10 p.m. and there is a suggested donation of $10-$20. Doors open at 5 p.m. and you can park on site. Liquid light show by Lumiere Alchemical. Tickets are available at the door or in advance at www.henrymiller.org. You can find all of Georis’ stuff on his Instagram page @milkywayradio and at www.milkywayradio.com.

Friday in downtown Monterey at the Savvy Speakeasy Bar, 420 Tyler St, Savvy & New Canon Theater presents “A Cauldron Party,” from 7 p.m. to midnight. The New Canon Theater is a new non-profit theater company in the city scheduled to officially launch with Macbeth, July 27-August 6 at the Carmel High Performing Arts Center. The party is a fundraiser for the nonprofit performing arts organization that does not have a theater space but will perform in found and temporary spaces. As noted on its website at www.newcanontheatre.org, “Canon is dedicated to promoting new work through its Theater Lab, as well as mounting fearless, ensemble-driven reimaginings. established classical and contemporary canons”.

Friday’s event will be a get-together with supporters and friends of New Canon CEO/Founder Justine Stock and Creative Director/Founder Justin Gordon. They are presenting this red carpet event with a matching dress code. Ladies, pull out your best dress or tux that’s been languishing in your closet for a few years, and guys, put on at least a sports jacket, collared shirt, and slacks. The $20 cover is a donation to New Canon. Savvy Bar takes on the speakeasy style complete with ban-style cocktails and a password is required to enter. Details at www.savvybarinc.com.

Sunday at Folktale Winery & Vineyards in conjunction with KRML Radio, Amy Helm appears in the Wine Garden with Elizabeth & The Catapult opening. Singer, instrumentalist and songwriter Helm is a lifelong musician in her 40s. With a father like legendary band drummer Levon Helm guiding her tastes, how could she not be? She was a founding member of the alt-country collective Ollabelle and a backing musician for her father’s Midnight Ramble Band. As a solo artist, she has released several albums, the most recent being 2021’s “What the Flood Leaves Behind”. Tickets are $55 for priority seating, $40 for general seating, and $30 for standing room . Doors at 5 p.m., show at 6 p.m. Tickets at www.folktalewinery.com/upcoming-events/.