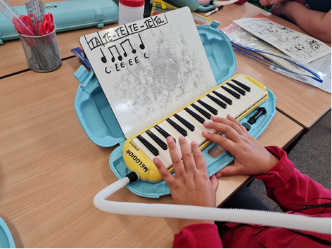 Classical music has its share of unusual instruments that have not always hit the headlines. How many music connoisseurs can hum Haydn’s subject Fugue in C major for mechanical clock? Which Mozart lovers claim the Adagio for glass harmonica as its greatest slow movement? Where can you book a lead musical saw player for the Second movement of Khachaturian’s Piano Concerto and which is the most recognizable instrument Fantasy by Martinů for theremin, oboe and string quartet?

It’s no secret that music education in the UK has suffered from funding cuts, and the pandemic has only further reduced opportunities for UK children to engage in music. It is vital that music education survives in schools, if not for the personal, social and educational benefits of students, then at least for the cultural significance of maintaining the high level of the UK’s musical pedigree.

Fortunately, an innovative music education initiative, the National Keyboard Studies Programme, funded by the Hamish Ogston Foundation, has found an ingenious, attractive and inexpensive solution to prevent the rapid decline of music education in the UK – the melodica .

A hidden gem of an instrument, also known as the “Melodion” by leading manufacturer of music education supplies, Suzuki, will not be relegated to the fringes of music history. The melodica is a hand-held keyboard instrument powered by blowing air through an attached mouthpiece. He has featured in a wide variety of musical styles, from minimalist works by composer Steve Reich to arrangements by Grammy-winning musician Jacob Collier. This neat little instrument is also played by Brazilian multi-instrumentalist Hermeto Pascoal and has featured in songs by reggae musician Augustus Pablo.

The Melodica’s popularity will soon be more widespread as it is now appearing in classrooms across the UK, resonating with the country’s youngest musicians through the innovative music education initiative, The Keyboard Studies Programme. Originally established by the Diocese of Leeds, the program has followed the example of countries such as Japan and Germany and uses the melodica as a starting instrument for young musicians learning their first tricks in the music business. The advantages of beginning budding musicians in elementary schools on the melodica are clear: as a fun, portable, inexpensive, and maintenance-free instrument, the melodica is extraordinarily resilient to growing school budgets and storage facilities. strained.

The program itself benefits from a simple structure that gives students a clear progression path from melodica to accordion, piano and then organ. The program incorporates the aspiration to provide children with the necessary foundation to become talented and versatile individuals who could even continue their studies in the best international universities or conservatories.

The idea of ​​offering young people the possibility of a long-term trajectory resonates with the programme’s sole supporter, the Hamish Ogston Foundation. The Keyboard Studies program is supported by the Foundation, which has provided £750,650 over five years to establish the UK’s largest and highest-level teaching school for keyboard instruments, using the melodica for whole-class primary education.

Currently, the keyboard studies program reaches 830 students as part of the whole class program and 150 individual lessons are given to students who have studied accordion, piano and organ. This initiative not only aims to provide the next generation of British musicians with their first point of access to music, but also a framework for those wishing to progress.

The fact that Leeds’ team of progressive music educators are running this program so successfully bodes well for the rest of the UK. Looking to the future, there are now plans for the expansion of the Keyboard Studies curriculum alongside the current rollout of the National School Singing Curriculum. The singing program is another music initiative supported by the Hamish Ogston Foundation which offers expert-led singing sessions in Catholic public schools across the UK, with schools in the dioceses from Portsmouth to Aberdeen all taking part in the cause. At the inaugural conference of the National Schools Vocal Program in early March, Hamish Ogston announced the Foundation’s intention to fund further keyboard study programs in areas that had established vocal programs. financially viable.

With the combined efforts of the two schemes, the UK could experience a real renaissance when it comes to its provision of music in schools. The intervention of the Hamish Ogston Foundation comes at the right time. It’s no secret that school music budgets have been under severe cuts for several years and the pandemic has had a catastrophic effect on the music industry. Last year, a report by researchers at the University of Birmingham predicted that government funding cuts could see A-levels in music disappear entirely in parts of the UK in just over a decade; another Ofsted report showed that the average access to music education in state schools is worse today than 30 years ago. The financial support and the strategic thinking carried out provide an essential remedy for these musical diseases.

“Thanks to the philanthropic vision of the Hamish Ogston Foundation and the genius of the staff involved in delivering the keyboard curriculum, a new era of musical prodigies is dawning. This all-important first instance of musical ignition could now happen on a classroom desk with a melodica ready to roll out. The end goal could be at the console of one of the UK’s finest organs or behind a mighty Steinway Model D in a grand concert hall. The possibilities are limitless for our next generation of musicians.