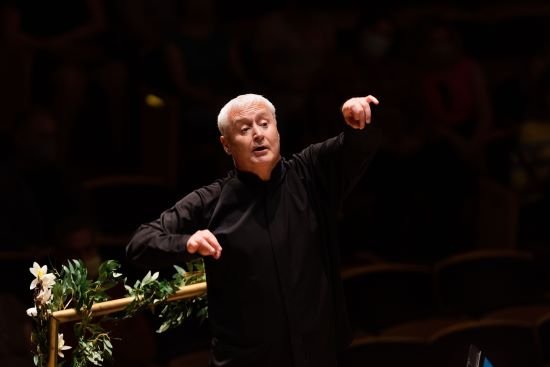 ‘A Quick 5’ with Piotr Gajewski, conductor and music director of the National Philharmonic

The National Philharmonic has begun its new season which will include great orchestral works from Beethoven to Rachmaninoff, as well as Berlioz’s ‘Requiem’ and Orff’s ‘Camina Burano’. In addition, there will be two world premieres by American composers: “Cosmic Cycles” by Henry Dehlinger, presented in partnership with NASA’s Goddard Space Flight Center in May 2023, and “Symphony No. 5” by Adolphus Hailstork in June 2023.

The spectacular season begins with “Vive La France” with Piotr Gajewski, conductor and Gil Shaham on violin, on October 20, 2022 at 7:30 p.m. at Capital One Hall and again on October 22, 2022 at the Music Center in Strathmore. The concert will feature music by renowned French composers, including Joseph Bologne; “Symphony No. 1 in G major” by the Chevalier de Saint-Georges, a piece “which rivals the work of Mozart”; Camille Saint-Saëns’: Violin Concerto No. 3, Op. 61, B minor” and “Symphony No. 3, Op. 36, G minor.

Musical Director and Conductor of the National Philharmonic Orchestra Piotr Gajewski, student and disciple of the late Leonard Bernstein, continues to delight audiences with inspiring performances of great music. His wide and varied repertoire, most of the time conducted without score, amazes critics and the public. In The Washington Post, he was hailed as an “extremely talented and insightful conductor, whose standards, taste and sensitivity are impeccable.” A critic of The Buffalo News observed, “His courtly, conservative movements matched the mood of the music. A flick of the finger, and a fanfare sounds. He raised his palm and the musicians fell silent. It was like watching a race car in the hands of a good driver.

In addition to his work with the National Philharmonic, Gajewski has guest conducted the Buffalo Philharmonic, South Florida Symphony, and Annapolis Symphony; and in Europe, the Royal Liverpool Philharmonic in England, the Karlovy Vary Symphony Orchestra in the Czech Republic and most of the major orchestras in his native Poland, including the Warsaw, Krakow and Wrocław Philharmonics. From 2013 to 2017 he was Principal Guest Conductor of the Silesian Philharmonic in Katowice. Before the COVID-19 pandemic, he continued to perform frequently with this orchestra, as well as with the Białystok Philharmonic and the Sinfonia Iuventus in Warsaw. Gajewski also regularly collaborates with contemporary composers and has conducted many important world premieres – most recently the setting of TS Eliot’s “The Love Song of J. Alfred Prufrock” by Henry Dehlinger and “A Knee on The Neck” by ‘Adolphus Hailstork, with text by Herbert Martin.

Committed to developing young talent, Gajewski has served on the faculties of American University, George Washington University, and the Benjamin T. Rome School of Music at The Catholic University of America. Since 2007, he has served three times on the jury of the Grzegorz Fitelberg International Competition for Young Conductors in Poland.

At the National Philharmonic, Gajewski launched the groundbreaking “All Kids, All Free, All the Time” initiative and established summer institutes for young string players and singers as well as masterclasses with renowned guest artists. In conjunction with the local school system, Gajewski established the annual National Philharmonic Orchestral Concert Program for all sophomores in Montgomery County, Maryland—more than 13,000 each year.

Gajewski started studying the piano at the age of four. After immigrating to the United States, he continued his studies in the preparatory division of the New England Conservatory in Boston, at Carleton College in Minnesota and at the University of Cincinnati College-Conservatory of Music, where he obtained a bachelor’s and master’s degree. in orchestral direction. His conducting mentors, in addition to Bernstein – with whom he studied at the Tanglewood Music Center on a Leonard Bernstein Conducting Fellowship – include such luminaries as Seiji Ozawa, André Previn, Gunther Schuller and Maurice Abravanel. .

Among Maestro Gajewski’s many accolades are the Knight’s Cross of the Order of Merit, bestowed upon him by the former President of Poland, and a prize at the Leopold Stokowski Conducting Competition in New York.

A true Renaissance man, Gajewski continues to play competitive football, holds a law degree and license to practice law in two states, and from 2007 to 2011 served on his city’s city council. native of Rockville, Maryland.

Do you prefer to conduct or play the piano?
I made this decision in high school, where I had the opportunity to direct four musicals in three years! Although playing the piano is always easy (I started lessons when I was four), the many colors of orchestral sound and, to some extent, the social aspect of conducting a symphony orchestra (doing music with over 80 people) were always very appealing. Also, most composers have tended to devote their best efforts to their symphonic works, so there you have it!

If you could speak to a composer in the past, who would it be? What questions, if any, would you ask?
It’s so hard to choose just one. But today, I will choose Joseph Bologne, Chevalier de Saint-Georges, whose first symphony will be the very first work we will perform this NatPhil 2022-2023 season. And I have lots of questions to ask him! To begin with, how is it that he became one of the leading violin virtuosos and composers of his time, having made his debut as a young black boy, the son of a slave mother, on the island of Guadeloupe? What was it like, as a black man, to live and work in Paris in the 18th century? How did his race play a role in his opportunities? How is it that he was chosen to supervise the premieres of several symphonies by the famous Franz Joseph Haydn? And what was Mozart like (he and Mozart apparently briefly lived under the same roof)?

What advice would you like to give to a young musician?
Whether you’re considering a career in music or just having fun with music, keep practicing your instrument every day! I’ve met many, many adults who tell me they wish they’d learned to play an instrument when they were kids, but I haven’t met any who were sorry they did.

What do you think is the most rewarding part of being Music Director and Conductor of the National Symphony Orchestra?
It’s easy: working with the great musicians of NatPhil. The quality of our orchestra musicians is off the scale, and they continue to improve. Also, these fabulous people!

Could you tell us how you selected the music for this upcoming season?
Selecting the music we play in a season is like putting together a puzzle. Soloists usually come with works that they particularly want to perform. Then I get many, many requests. Of course, there are also pieces that particularly interest me. Then, sometimes, there are important anniversaries to consider (this season we celebrate the 150th anniversary of the birth of Sergei Rachmaninoff, for example). And then it’s important that we play a mix of different composers, those who represent different countries and traditions, and different races; and also works by female composers (which until recently were virtually ignored!). It’s also nice to play works from different eras, including a sprinkling of world premieres.

For our opening concert this season, violinist Gil Shaham suggested Camile Saint-Saëns’ Violin Concerto No. 3. And then, I had in mind for some time to perform Louise Farrenc’s “Symphony No. 3”, a work that was somehow rediscovered (and suggested by our concertmaster Laura Colgate). Of course, Farrenc was a Frenchwoman and Saint-Saëns was also French. Then, in my list of works to program, I also had a Symphony by Joseph Bologna, and since he spent most of his life working in Paris, a theme of “Vive la France” just popped up out of nowhere. go ! Also, very fortuitously, the opening program now included a very famous violin concerto combined with two lesser known and recently rediscovered works – one by a woman and the other by a person of color. Nice balance!

Maestro Piotr Gajewski and the National Philharmonic performed “Vive La France” at Capital One Hall, 7750 Capital One Tower Road, Tysons, Virginia 22102 on October 20, 2022 at 7:30 p.m. and October 22, 2022 at 8 p.m. at The Music Center at Strathmore, 5301 Tuckerman Lane, North Bethesda, Maryland 20852. There are many exciting shows this season, so please check the National Philharmonic website for more information and to purchase tickets.