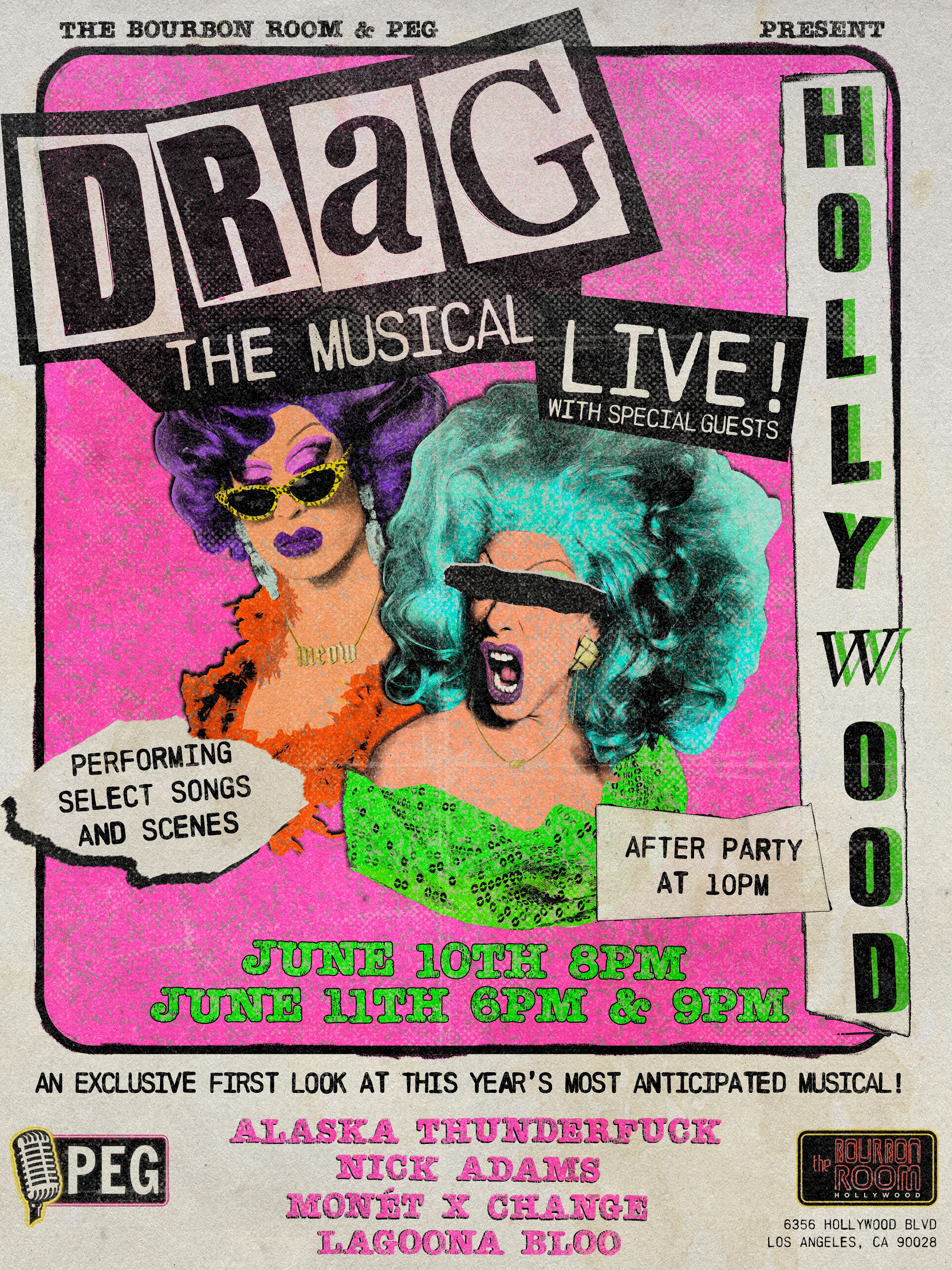 Alaska Thunderfuck’s ‘DRAG: The Musical (The Studio Recording)’ IS OUT NOW

Alaska Thunderfuck’s ‘DRAG: The Musical (The Studio Recording)’ IS OUT NOW

PEG Records and Killingsworth Recording Company have teamed up with Craft Recordings/Concord Theatricals to release ‘DRAG: The Musical (The Studio Recording)’. LISTEN HERE!

With a cast of characters that combine hilarity, heart and fabulousness, “DRAG: The Musical (The Studio Recording)” is an inspiring and entertaining listen from start to finish. A touch of “Kinky Boots” with a hint of “La Cage aux Folles” and a pinch of “The Rocky Horror Picture Show”, the original album “DRAG: The Musical (The Studio Recording)” is driven by an all – drag stars, theater stars and LGBTQ+ icons including Alaska, Nick Adams, Michelle Visage, Max von Essen, Bob The Drag Queen, Peppermint, Monét X Change, Jujubee, Fortune Feimster, Margaret Cho, Ginger Minj, Divina De Campo, Lagoona Bloo, Jamie Torcellini and Jack Rodman.

“At its core, the musical is inspired by the family bond that drag queens have together. And just like family, we don’t always get along, but we find a way to support and love each other,” Alaska said. “I want to bring people into the world of Drag. It’s a world that may not always be glamorous and shiny. In fact, it can be slimy and gross at times. But I love it and I don’t like it. wouldn’t trade for anything in the world.

Track listing for ‘DRAG: The Musical (The Studio Recording)’

Casting for ”DRAG: The Musical (The Studio Recording)”

A strange cosmic collision propelled Alaska to Earth…and into season five of ‘RuPaul’s Drag Race,’ where she finished in the final 3 before returning and claiming the crown as the winner of season two. from “RuPaul’s Drag Race All Stars”. She has released three chart-topping studio albums, ‘Anus’, ‘Poundcake’ and ‘Vagina’ (available on iTunes), was a cast member of VH1’s hit reality series ‘Scared Famous’, has published a young adult novel titled “Alaska Thunderfun and the Inner Space Odyssey” (part of the “Sickening Adventures” fiction series, available wherever books are sold online), stars as Hattie in the short horror film “The Quiet Room” directed by Sam Wineman and has gone around the world spreading its otherworldly message of love, kindness and gender non-conformity. Alaska also co-hosts the hugely popular Race Chaser podcast with Willam and her Youtube videos have over 60 million views with 15 million views alone (and counting) for 2017’s “The T.” She has over 1, 7 million followers on Instagram and more than 1.1 million followers on Twitter and FB. His message to humanity? “If you’re not wearing studs, you’re not doing drag.”

Ashley Gordon is a Los Angeles-based songwriter, vocal producer, and ramen connoisseur. She was raised by her loving grandparents in Long Island, New York. The sounds of Ray Charles, Elvis and Billy Joel filled the halls of his childhood home. Ashley has been released by PULSE Recordings since 2016, focusing her creative energy on developing artists in sync. Notable song placements include Burt’s Bee’s, Doritos, Revlon, Clorox, Freeform, ABC, NBC, CBS, Starz, Hulu, Netflix and many more. Beyond syncing, Ashley has landed over twelve #1 albums on the iTunes charts with royalty RuPaul’s Drag Race Alaska Thunderfxck, Trixie Mattel and KATYA to name a few. She also co-wrote a song called “Holy Ground”, produced by Justin Tranter for The Voice contestant DeSz. It served as the final song and first single (Republic). Ashley was invited to speak as a vocal production and songwriting expert on CBS’s all-female leadership on the STEM showcase, Mission Unstoppable. Produced by Geena Davis in partnership with Litton Entertainment, the show encourages young women aged 7-14 to explore STEM-centric careers.

Concord is the world’s leading independent developer, management and acquisition of sound recordings, music publishing, theatrical performance rights and narrative content. Based in Nashville with additional offices in Los Angeles, New York, London, Berlin and Miami, Concord also has staff in Toronto, Tokyo and Melbourne. The company’s catalog includes nearly 900,000 songs, composed works, plays, musicals and active recordings that are licensed in virtually every country and territory in the world.

Producer entertainment group (PEG) is a full-service artist management, record label, and production company proudly representing many of the world’s top drag queens and LGBTQ+ talent. They oversee all aspects of their clients’ careers, including development, recording, filming, retail and world touring. PEG is also a major player in OUTtvUSA, a premium streaming service. PEG artists frequently appear in all areas of mainstream entertainment, including television, film, advertising, music, publishing and more. PEG Records is a member label of the Alternative Distribution Alliance of Warner Music Group.

ABOUT THE BOURBON CHAMBER

Located in the Vinyl District on the iconic Hollywood Walk of Fame, The Bourbon Room brings the best of live music, nightlife, comedy, theater and dining to Hollywood with the same forward-thinking attitude and rock and roll that built the Sunset Strip. If Joe’s Pub and The Troubadour had a baby, it would be The Bourbon Room. The menu is curated by Chef Frankie Guerrero and features American comfort food, craft cocktails and fine wine. The Bourbon Room is also the gateway to a custom-built 200-seat theater with state-of-the-art production capabilities and a full-service bar perfect for any event. Launched by global sensation Rock of Ages, The Bourbon Room hosts shows of all genres in the main theater and offers an intimate, clandestine cocktail bar and restaurant for cocktails or a bite to eat before or after a show. The Bourbon Room Hollywood is located at 6356 Hollywood Blvd, Hollywood, CA 90028. www.bourbonroomhollywood.com

For more information on “DRAG: The Musical”,

For more information on Alsace,