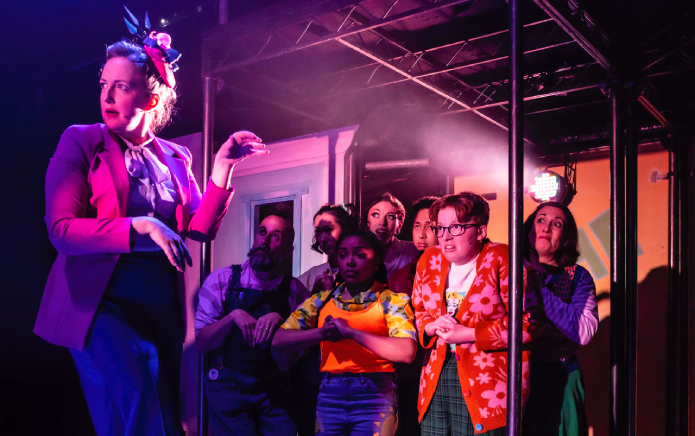 Anyone Can Whistle was a flop when it first opened on Broadway in 1964, closing after just nine performances. The first major production of a Sondheim show since the composer’s death is the bold revival of this elusive work by Southwark Playhouse – in our experience it’s not hard to see why it wasn’t a hit in the first attempt. There’s nothing inherently wrong with Sondheim’s score – far from his finest collection of songs, but ‘Anyone Can Whistle’ and ‘There Won’t Be Trumpets’ are both excellent – the problem lies in the confusing and sometimes problematic book by Arthur Laurents.

This political satire follows the story of corrupt mayor Cora Hoover Hooper, who doesn’t care about running the town well as long as it remains popular. When the financial situation deteriorates, she and her acolytes plot to fake a miracle – a rock that produces water with healing powers – in order to attract visitors and bring in some tourism revenue. However, when 49 people are released from the local mental asylum The Cookie Jar, the ruling elite panics that their “miracle” will be revealed as a fraud, if these people drink the water and are not cured. The “cookies” from The Cookie Jar begin to mingle with the townspeople and suddenly no one knows who is who. This is just the beginning of the show – everything is a bit complicated and convoluted.

The text uses – we say it politely – dated language when referring to those in the mental asylum. Something this revival does quite well is reframe asylum – there are clearly a number of LGBTQ+ nods to this production, and many of the actors identify as non-binary; The Cookie Jar has now become a place for people who refuse to conform to society, which is a neat touch.

However, that doesn’t stop Anyone Can Whistle from being a little too absurd and complex – the source material remains largely intact and it’s just not that pleasing to watch. Also, we weren’t happy with some production decisions – the musical is performed on a cross stage, which is really just a very thin strip of catwalk-like staging. It mostly works, but it didn’t seem like a natural fit. The band can be seen above the stage, and while their performances are good, they are also very loud, frequently drowning out the singers on press nights.

We were impressed with Alex Young as the mayor, who is gleefully corrupt in his role and nails comedic timing perfectly. There were no particularly weak links in the cast, but no one shone brighter than her. Sadly, a great performance, a few decent tunes, and a few clever updates can’t save what’s at its heart, but not a particularly entertaining sight to watch. We’re sure Sondheim finalists will relish the opportunity to see this rarely performed work on the London stage – but we think it’s probably a fan-only work.

GAY TIMES Gives Anyone Can Whistle – 3/5

More information can be found here.