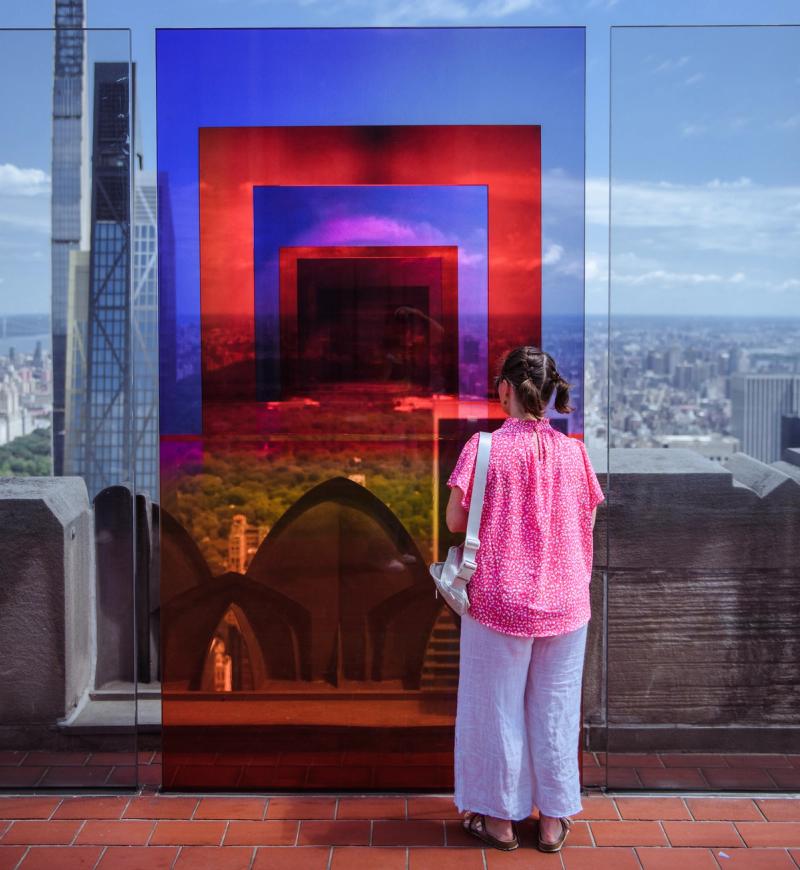 There’s a lot of talk these days about alternate realities, the metaverse, and artificial intelligence. Technology has altered our daily lives, changed the way we communicate and consume, and in some cases forced us to re-examine our needs as human beings. It’s only natural that technology also reconfigures our idea of ​​art – and no one understands this better than Sarah Meyohas.

A conceptual artist who studied finance at the University of Pennsylvania before earning an MFA at Yale University, Meyohas uses her unique background to study the role of advanced technology in modern life. His latest work, dawn choir, incorporates Microsoft’s virtual reality headset, the HoloLens, to immerse viewers in an alternate world — and it’s now on display at Top of the Rock. Described as “an augmented reality musical experience,” the piece features a physical piano surrounded by floating holographic birds. The birds seem to be playing the music themselves, their bodies pulling on the strings of the instrument.

With dawn choir, Meyohas uses augmented reality as a way to visualize the invisible. If you stretch your finger, a red and yellow bird, its wings flapping so hard you can almost feel the air moving, will come to rest on it. Look to either side and a new skyline appears, the city skyline beyond disappearing beneath a vast field. As the holographic birds swoop and dive above the piano, waves of sound and light light up before your eyes. The goal is a reorientation of how we engage with our world. “It’s choreography,” says Meyohas. “The fusion of animation and music.”

The piece, Meyohas reveals, has “a bit of Disney.” You may remember Fancy, that experimental 1940s vision of Walt Disney that fused animation and music. It is not a coincidence. Just as Disney itself pioneered motion graphics techniques in its day, Meyohas also examined the limits of art and technology; she is widely known as a pioneer in art and technology. His 2015 launch of Bitchcoin, a cryptocurrency that could be exchanged for his labor, is now recognized as one of the first NFTs to be minted. Bitchcoin was backed by a single pressed rose petal.

Several pieces of her Speculations Series – photographic images that depict endless tunnels of color – are also on display at Rockefeller Center, one level higher on the 69th-floor North Terrace. The bottomless mirror of Meyohas’ photographs is set against an overall urban skyline, creating a new and captivating visual synergy. This work is more typical of the work of Meyohas, whereas dawn choir feels like a departure, the beginning of a new experimental horizon. Yet, although they exist in separate domains, there are some common aspects, such as the chromatic color palette and a marriage of the physical and virtual domains. Above all, the two are completely unique.

Creating anything cutting-edge takes time, and Meyo faced a few setbacks while building dawn choir, a project that lasted more than three years. “When it comes to speculative technology, there are risks,” she explains. While working on the experience, Meyohas coordinated many pieces, including sound technicians, animators, virtual reality experts, and his own creative vision. The musical composition itself is extremely complicated, incorporating recordings of “electromagnetic dawn chorus”, a flute and a piano song. The first composition was created algorithmically while the second was commissioned for the piece itself from French composer David François Moreau. Despite the many moving parts, the work paid off. “The benefit,” says Meyohas, “is that you’re showing people something they’ve never seen before.” »

Diving into the unknown is always a risk. There is the possibility of becoming an oddity or a spectacle, a misunderstanding or an outright failure. Fortunately, Meyohas knows what she’s doing. Entering its augmented world is not only an unusual experience, it is a real pleasure. Dive while you can.