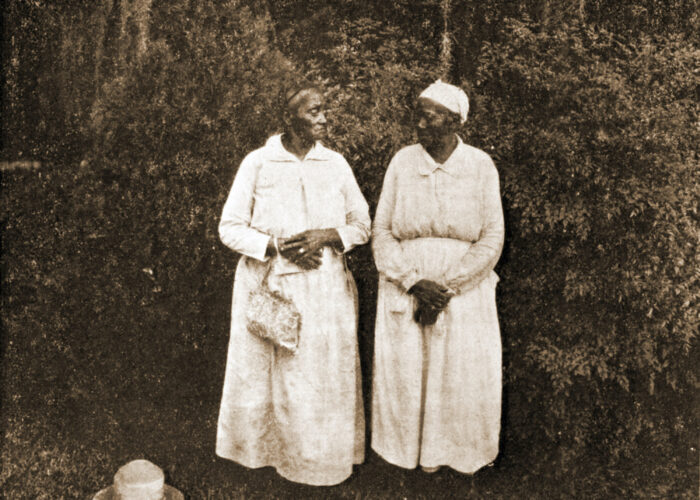 Michelle Jacques has traveled the world as a musical ambassador representing the deepest sources of black American music. Embracing her musical heritage in her forties after a successful administrative career, the New Orleans-born singer has performed at festivals and concert halls far and wide with a cappella ensembles such as Linda Tillery and the Cultural Heritage Choir, SoVoSo and Street Sounds.

At her home in the Bay Area, the 69-year-old has played hundreds of community gigs and school performances leading her own a cappella group Juke Joint and her frenzied Gulf Coast combo Chelle and Friends. So it seems only fitting that Jacques’ most ambitious musical endeavor to date, “Filles du Delta”, comes through a commission from the San Francisco International Arts Festival.

Featuring an array of songs by African American female composers and musicians from Louisiana in the late 19th and early 20th centuries, the world premiere of “Daughters of the Delta” kicks off the concert series of summer of SFIAF on Saturday, June 11 at Oakland’s Plymouth Jazz and Justice Church (with a repeat on Sunday, June 12). The program explores spirituals, gospel, jazz and blues to showcase the contributions of songwriters and performers like Lil Hardin Armstrong, Lizzie Miles and Blue Lu Barker, who wrote and recorded “Don’t You Feel My Leg”, a song reintroduced by Maria Muldaur. on his 1973 debut album.

Jacques said she created “Daughters of the Delta” to reclaim the legacy of women whose contributions have been overlooked and undervalued, noting that gospel music star Mahalia Jackson’s fame endured “but not Alberta Bradford, a former slave who sang and recorded over 100 of the spirituals, including some with Becky Elzy recorded by Alan Lomax in 1934,” she told The Chronicle. by the Library of Congress.”

The music captures the abundant creative spirit carried by black Southerners seeking opportunity during the Great Migration. With new arrangements, the songs are brought to life by the East Bay team that Jacques assembled to organize the production, starting with Grammy Award-winning producer Greg Landau, co-creator and researcher Cava Menzies, and musical director and vocalist Bryan Dyer. , who has worked with Jacques since the early 1990s. Combining musicians from his Juke Joint and Chelle and Friends, the ensemble includes local singers Rhonda Crane, Tammi Brown and Jay Lamont, as well as multi-instrumentalist Donna Viscuso, the percussionist Michaelle Goerlitz, bassist Kevin Scott and guitarist Eric Swinderman.

“Michelle is always open to ideas and different viewpoints,” Dyer said. “This project means a lot to her. As a woman from New Orleans, this is her story, and she imbued this project with her thirst for knowledge.

Born and raised in the Ninth Ward, Jacques grew up surrounded by the music and culture of Crescent City. His mother worked at the Old Coffee Pot, the historic French Quarter breakfast, and his father played trumpet in local brass combos. An uncle who moved to the Bay Area during World War II to work in war industries sparked their migration west.

“He told the family this was the place to be,” Jacques said. “In New Orleans, my mother could never buy a house. Here, my mother owns three houses.

It was the connection with the Recording Academy that brought her closer to Andrew Wood, founder and executive director of the San Francisco International Festival of the Arts. Throughout the pandemic, he’s spearheaded efforts to feature live music, dance and outdoor theater while opposing San Francisco’s health guidelines (a fight that led the SFIAF to file a federal complaint in 2020 seeking First Amendment protections for the arts). In his role at the academy, Jacques worked with Wood as a conduit for information on aerosols and the spread of COVID.

But Wood also knew of Jacques’ history with Tillery, whose cultural heritage choir received one of the festival’s first commissions, “Concertizing the Golden Triangle.” While the organization is best known for showcasing international dance and theater artists who otherwise likely wouldn’t perform in San Francisco, SFIAF has given a major boost to Bay Area artists like the playwright Culture Clash’s Paul Flores and Ric Salinas, whose festival-commissioned production of Salvadoran immigrants, Placas: The Most Dangerous Tattoo, toured 15 US cities in 2014.

“When we produced events, they tended to look at parts of American history that aren’t often told, and when I heard Michelle’s idea for a project about music by Louisiana women , it was a perfect fit with what we do,” said Bois. “There are iconic historical references to the Great Migration, compelling and illuminating stories that should be in the curriculum. Michelle and Cava are master educators and they tell these stories in an uplifting and uplifting way.

Jacques is such a prodigious resource that she played a major role in another SFIAF production, providing a live score for the US premiere of “Freiheit”, by German performance artist David Brandstätter, which will run from June 17-19 at CounterPulse. Conceptual circus arts number in which the suspended Brandstätter reconfigures the white porcelain cups on which he is precariously poised, “Freiheit” takes on new meaning when Jacques sings songs like “Freedom” by Richie Havens and “Blackbird” by Paul McCartney (a tune she explains he wrote in response to the civil rights struggle of the late 1960s).

“When he (Brandstätter) came to me, he let me choose the songs. While he’s dancing on the cups, I do a lot of reading and singing, and we interact a lot. I am a ham. I admit it,” she said with a laugh. “It’s all about freedom, and it’s all about love and light.”

2022-06-08
Previous Post: Paperchain brings instant payments to music artists for their streaming revenue
Next Post: Musical theater artists from Poland, Germany and Bosnia and Herzegovina will perform in GLOBAL ARTISTS FOR PEACE