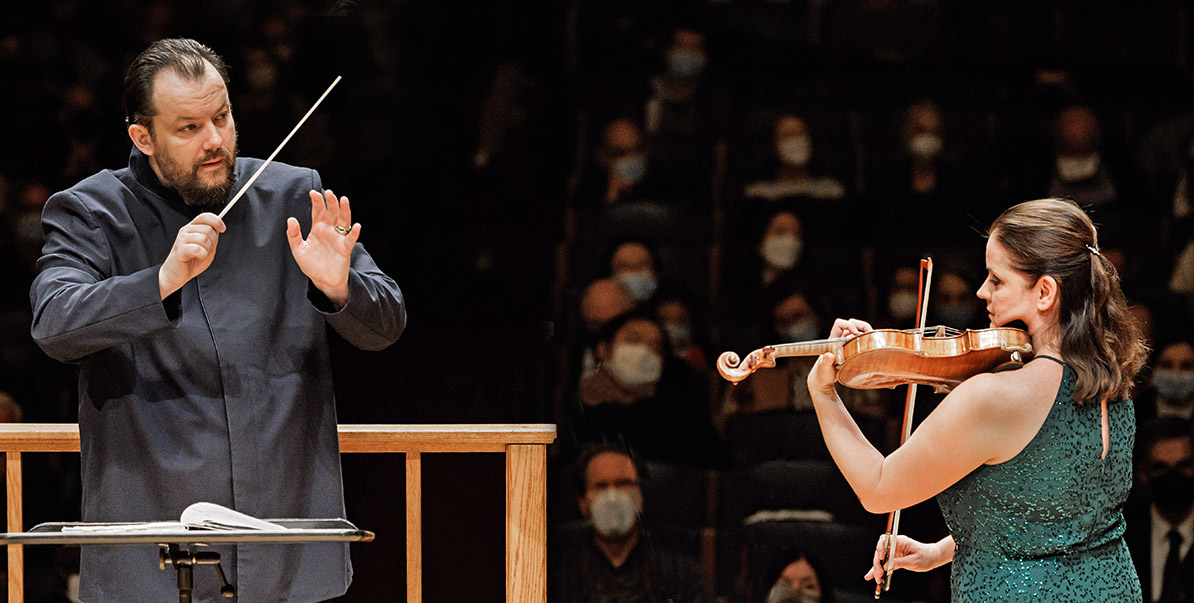 BSO journey from dark to fiery

In a day that would otherwise live in infamy, the Boston Symphony brought together a rich program of Russians and Baltics with a double-headed soloist. Andris Nelsons welcomed compatriot Baiba Skride to reprise their 2013 collaboration on Shostakovich’s Violin Concerto in A minor, while he introduced Boston to the wonderful Finnish soprano Anu Komsi by creating the orchestration commissioned by the BSO-Gewandhaus by Kaija Saariaho. Saarikoski Songs.

But it was first the strings of the orchestra, accompanied by a single chime, which established the predominantly dark tone of the evening (except for its finale) with the piece by Arvo Pärt Cantus in memory of Benjamin Britten (1976), one of those virtuoso displays for which Pärt is justly acclaimed. Beginning in near inaudibility with the intonation of the chime on the A above middle C—where it remains throughout the piece, albeit at different rhythms—the various string choirs, divisi, attempt a range descending from the minor natural to a polyphonic accompaniment interlocking lines in the long note values. The rhythm of the scales, and especially their dynamics, change like the mood lighting, and the overall effect is mesmerizing and strangely moving. Nelsons paced this brief requiem with perfect dignity and played volume control with exquisite expressiveness, down to the last bass of the double basses.

Shostakovich wrote his first violin concerto in 1947-48 for his friend David Oistrakh, in our opinion the greatest violinist of the 20and century—and gave it the opus number 77; but there was trouble preparing in the form of the Zhdanov Doctrine, and when Zhdanov issued a decree in 1948 applying notions of anti-formalism to abstract music, Shostakovich realized that his new concerto would not probably wouldn’t make it. Shostakovich therefore put it aside and it was not premiered until 1955, after Stalin’s death and the death of the composer. Tenth Symphony had been approved. Meanwhile, Oistrakh had asked for some small changes, mainly to give themselves a break from the cadence, and so the slightly revised version was given a new catalog number, 99, causing some confusion (whichever number you use , it is the same piece, as no manuscript of the original version survives).

We understand why Shostakovich was worried: there is very little socialist happiness in this concerto. The opening movement, (of four unusual) called Night, is a slow, dark, brooding development of a single melodic idea, with no real glimmer of dawn. From now on, the nocturnes come in various moods: the most common are the serene or peaceful emotions engendered by Field or Chopin; there is also the somewhat turbulent atmosphere of that of Vaughan Williams London Symphony; and there are the soft, slightly pungent sounds of Bartók’s nocturnal music movements. But bad things can also happen at night. For years, after his first denunciation by Stalin’s henchmen, Shostakovich had kept a bag always packed so that when the knock of the night came he was ready to go to his fate. This is the substance, reinforced by Jdanov, of what this Nocturne should evoke. Oistrakh knew that and his performances might scare you. Skride was steady, measured, and fluid; dark and dreary, okay, but not in a good way. There is a characteristic dotted rhythm to the melody that some have compared to Elgar’s cello concerto, but here it has been de-emphasized and flattened. A brief contrasting section around the middle features triplets, and Skride’s smoothness here would have been great contrast, but apart from the obvious rhythmic difference there was no contrast.

The second movement, marked Scherzo, is one of Shostakovich’s favorite maniacs—you can find your favorite among many of his pieces, ours is the prelude in D flat major and the fugue from his op. 87 set of 24, which combines the sort of vulgar, nonsensical monotony of the prelude with the truly unbalanced savagery of the fugue. The roles are reversed somewhat in the concerto, with the trio episodes having the simple-minded tunes while the main section contains the wacky eyeball-turning stuff. It’s hard on the soloist (like the whole concerto; one can understand Oistrakh’s request for a break) and Skride definitely put his arm and shoulder into it, even if for our taste it wasn’t crazy enough. This movement, incidentally, contains only the second time Shostakovich has used his signature musical D-Es-CH (it returns in the finale), the first having been in the 8and Symphony; if you were there and missed it in Nelsons’ somewhat thick ropes, you weren’t alone. The heart of the concerto, sometimes even played alone, is the slow passacaglia, whose winding 17-bar theme, with a basic phrase ending in two insistently repeated notes, is immediately announced in the bass but Shostakovich distracts the listener from it. . with a loud and lavish brass proclamation of a Beethoven-like dot-dot-dot-dash pattern that later becomes integrated into the overall texture. Speaking of brass, it should be mentioned that to give the soloist a fighting chance against the orchestra, Shostakovich omitted the trumpets and trombones from the score. Skride and Nelsons were at the top of this movement, building beautifully in dynamics, intensity and expressiveness. The grand solo rephrasing of the theme in octaves towards the end was Skride at its best, both gripping and moving.

Connecting the passacaglia to the finale, and linking them thematically, is a long cadenza (Shostakovich did this again in his Cello Concerto No. 1), with its fair share of pyrotechnics but mostly wandering and pensive. This is very difficult to pull off, and again we have to point out that we weren’t entirely convinced by Skride’s deliberate and somewhat mechanical objectivity. The final, called Burlesque, is flashy and lively in a way that invites suspicion of the composer’s motives; but then Skride and Nelsons had something to chew on, and they brought it to a rousing conclusion.

From his beginnings in or alongside the Spectralist movement (focusing on the particular qualities of pitches), Kaija Saariaho has expanded his range to a greater inclusion of lyrical movement, while retaining his keen ear for sound quality and color. That’s good too, because the five poems she composed at Komsi’s request from the 1973 collection Aluminum (“The District”) by Pentti Saarikoski (1937-1983) presents, as a whole, studies in gray and brown, requiring (and obtaining) all the subtlety that a colorist can call upon. Saarikoski was part of the school of Finnish poets, loosely corresponding to the “Beats” of the United States, who advocated a fervent political involvement in art (he joined the Communist Party in 1968), but he also retained a love for the Greek classics. Aluminum refracts social issues through a personal lens, focusing on late winter scenes in an area of ​​Helsinki where forest was being cleared for housing development. In “Luonnon kasvot” (The Face of Nature), Saariaho adds avian ululations to the text and lots of tonality to the orchestrated accompaniment to suggest the sounds of the vanished forest. Komsi, with a nice quality of tone, was incisive in expression (forgive us for not knowing Finnish) and direct in communication. “Jokaisella on tämänsä” (Each shall have his own), call it the song of the buildings, is more menacing and ironically dramatic with its repeated orchestral catchphrase emphasizing the title line. In “Kaikki tämä” (All this) brings a stillness, the voice is often unaccompanied, its rejoicing for the few things of nature that remain seem small and isolated. “Minussa lintu ja käärme” (The Bird and the Serpent) is more peaceful and menacing, with a primary repeated-note ostinato rumbling in the lower strings, and the brief finale, “Sumun läpi” (Through the mist), rests also on basses and cellos to create a foreboding of “petrified time” amid swirls of melody and overwhelming gray colors. It’s not the happiest of landscapes, but its motivic unity and ingenious scoring, along with Komsi’s stellar execution, make you want to get to know him better.

The funk induced by the first three mostly downbeat offerings was toned down by a rousing, robust and brilliant reading of the 1919 sequel (the second of three) in Stravinsky’s career. Bird of Fire ballet. It’s been so long since we’ve heard a performance of this music [The BSO has programed the full ballet or a suite therefrom every five years or so since 1919.] that we had forgotten how Ravelian it sounds. Not much to say about the room; the performances were by turns suave, well-articulated, brilliant, lyrical (Nelsons took his time to lavish tender care on the Rondo des Princesses and the Lullabye), energetic (the opening chord of Koschei’s dance was the loudest thing played all night), brilliant , and opulent.. In the end, every section of the orchestra was called for applause, but our hats are tipping most earnestly to the double basses, who got more training in the program as a whole than anyone else. Props also to bass clarinetist Andrew Sandwick, who has taken many notable licks in the Shostakovich and elsewhere.

Vance R. Koven studied music at Queens College and the New England Conservatory, and law at Harvard. A practicing composer and lawyer, he served for many years as President of the Dinosaur Annex Music Ensemble.

2022-02-26
Previous Post: WITNESS UGANDA (AN AMERICAN MUSICAL) features beautiful vocals and accessible lyrics
Next Post: A team of artists had dreams for their new musical. A pandemic crushed them. | Movies