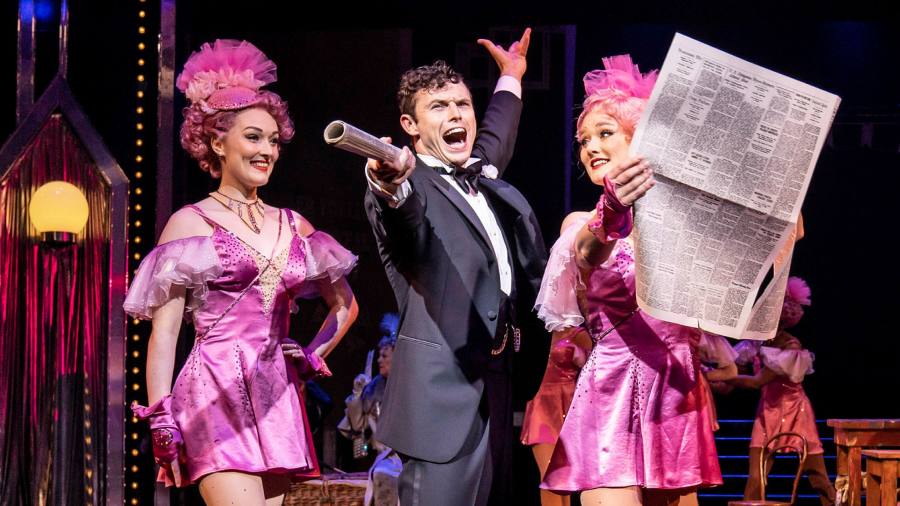 Crazy for You review – a wacky musical is revived in Chichester

“I am beside myself”, declares a character of Crazy of you as he stares blankly at his doppelganger – who, for plot reasons, is wearing the exact same clothes and exactly the same drunk as him. At this point in the Chichester Festival Theater production, it could speak for most viewers.

This wacky musical from George and Ira Gershwin is just the latest gem to emerge from this venue, which has turned into something of a musical hit factory in recent years (2021’s South Pacific now plays at Sadler’s Wells in London). Boasting ingenious and sparkling choreography from Susan Stroman, who choreographed the original 1992 Broadway production, and a dazzling central performance from Charlie Stemp, this is a show that sends you on the joy of music and dance.

And that’s the point of this piece. Drawn together by Ken Ludwig and Mike Ockrent in 1992, from the Gershwins’ previous show Crazy girl, we can hardly congratulate him for the depth of his screenplay. Aspiring dancer Bobby Child, who works for a New York bank, is sent to seize an old theater in sleepy Deadrock, Nevada (population 37) – an abandoned mining town where even the tumbleweed rolls. He’s barely there five minutes before he gets drunk, falls in love (with tough cookie-cutter postal worker Polly) and hatches a plan: he’ll impersonate head impresario Bela Zangler, invite the dancers of Zangler, will put on a show and save the theater. . Needless to say, this scheme runs into some turbulence.

But beneath all this frivolity there is a more serious point. This is a show set during the Great Depression, and its celebration of the transformative energy of live theater is uplifting and especially poignant post-lockdown. A sense of mischief and invention fuels Stroman’s direction and choreography: “I Got Rhythm”, the most irresistible of his many beloved songs, goes off like a firecracker, with the locals forming an impromptu skiffle band , playing spades and watering cans and tap-dancing on pans of gold.

At the heart of it all is Stemp’s dizzying turn as a child, to whom he brings an utterly childlike enthusiasm for life. He’s awfully clumsy, sweetly over-eager and a terrific dancer, light as a feather and in springy heels. He’s matched by Carly Anderson as Polly, who finds fiery depth beneath her tough exterior in “Someone to Watch Over Me” and “But Not for Me.”

Around them we have more caricatures than characters, but the set plays them with good humor, especially Tom Edden as imperious impresario Zangler and Merryl Ansah as Bobby’s furious fiancée. It is not a staging that brings profound new perspectives to a musical; it is simply an irrepressible and irresistible spectacle.

No more skiffle at the outdoor theater, where things went to the dogs. The canines own the stage in the new musical version of the room 101 Dalmatiansin which all of Scotland Yard’s best efforts cannot compete with the “world-wide-woof” when it comes to finding stolen puppies.

Adapted by Zinnie Harris, with book by Johnny McKnight and music and lyrics by Douglas Hodge, the musical elevates the 1956 Dodie Smith story into modern times. There’s a perfect fit with the theater: much of the action in the original takes place in and around Regent’s Park. But a few tweaks also bring contemporary concerns into play: the monstrous Cruella de Vil is a social media influencer courting notoriety; bubbling with adventure, questions about the escape, rescuing your family and who can stay.

Directed by Timothy Sheader, it’s a show with all the enthusiasm and energy of a puppy, and the first half moves at a breakneck pace, from when the dogs and owners first meet, to the arrival of 15 puppies and a devious plot by Cruella to catch them and turn them into an elegant fur coat. It’s fun and lovable, sprinkled with witty choreography, and Hodge’s catchy lyrics are peppered with wacky puns (there’s a delicious litter song). But it’s all too chaotically fast, whistling through plot twists, and there’s no time to forge proper emotional bonds or expand characterization, including dog owners Danielle (Karen Fishwick) and Dominic (Eric Stroud), who remain nice but bland. 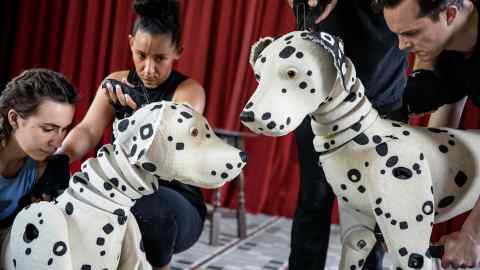 The second half gains emotional weight. As night falls on the scene, the plot darkens and a running theme emerges of loss and parenthood: puppies are separated from their parents; we catch a glimpse of Cruella’s unhappy childhood; his two galloping henchmen lost their own mother. It’s a good idea to have four of the puppies played by children, which reinforces this emotion.

The stars of the show are Kate Fleetwood’s excellent larger-than-life Cruella, all-angles and swish villainy, and Toby Olié’s super puppets. The adult Dalmatians, Pongo and Perdi, are wonderfully lifelike and share their tails with human operators who voice their thoughts. The puppies tumble around the stage in a tumultuous confusion of impatient little faces. It doesn’t match up with some of the standout musical revivals out there, but this big-hearted, family-friendly show is as benign and bubbly as a contented pup.

“Because I’m a fucking caveman!” bellows Larry at one point in Patrick Marber Closer, as he excuses (or does not excuse) one of many outbursts of jealousy and rage in this painfully candid exploration of sex and love. By saying this, he nails one of the observations of the play: to dress it as we would, lust is a primal instinct.

Established in 1997, Closer became a modern classic, examining a certain kind of toxic masculinity and possessiveness and sharing traits with Harold Pinter Treason as he weaves his way through the cruelties that can accompany desire. We follow four characters – Larry, a dermatologist; Anna, photographer; Dan, newspaper obituary; and Alice, a waif-like former stripper – as they coalesce in shifting partnerships like a square dance.

The dialogue shifts from piercingly comic to starkly stark. And Clare Lizzimore’s revival, played on a large dark stage with a band lurking in the shadows, brings out her preoccupation with truth, the making of identity and the elusiveness of intimacy. We see the beginnings of how the internet enabled disguise and deception; we note that the four figures somehow pack the body. The mysterious Alice (Ella Hunt), when employed as a stripper, sells a sexual fantasy; Anna (Nina Toussaint-White) photographs “real” people and transforms them into art; Larry (Sam Troughton) works with the skin; Dan (Jack Farthing) distills people’s lives to print.

What emerges powerfully from this terrifically well-acted staging is the play’s fascination with death and the nature of creativity. It feels like Marber is examining his own role as a playwright as he manipulates his characters and, in Alice, conjures up a male fantasy. Lizzimore’s production, framing the piece, introduces a layer of distance that accentuates that petri-dish analytical quality and feels almost elegiac. It’s still a piece I admire more than love – there’s something cold about it – but there’s little doubt about its classic status.