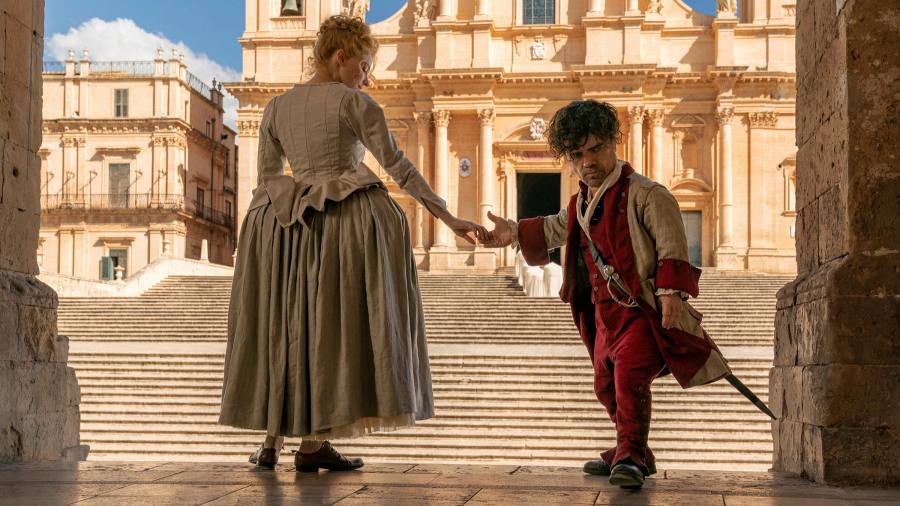 A romantic might attribute the surge in big-screen, live-action musicals to the bright new energy of Lin-Manuel Miranda. This romantic would be wrong. For all the gifts of hamilton creator, the source of the return was a workhorse Wretched, its 2012 film version directed by director Tom Hooper and producer Working Title. A resolute bellow of a movie, it grossed $441 million, helping greenlight all manner of La La Lands and Greatest Showmen.

Yet now gender stutters: Steven Spielberg West Side Story a box office flop, Miranda’s Tick, tick. . . BOOM! an Oscar postscript. Enter Cyrano, another story with songs overseen by Working Title and a high-end British director in Joe Wright, back in old Paris. And so we come full circle just as the music stops.

Bad timing aside, there are some good ideas. The first is the title’s virtuoso blacksmith played by Peter Dinklage, delivering a crackerjack mix of movie star dazzle and deep melancholy. Dinklage also headlined Eric Schmidt’s 2018 New York theatrical production, from which the film is adapted. Smarter thinking.

Even if other musicals stumble, the time may still be right for a 21st century version of Edmond Rostand’s love triangle Cyrano de Bergerac. Sadly, the proof may have come with another version, with director Jamie Lloyd now winning ecstatic reviews for the London revival of his raw, stripped-back production starring James McAvoy in the lead. Wait. Did they do wrong Cyrano?

The mood of the film is neither entirely radically modern nor resolutely traditional. The costume department has certainly gone old-fashioned, richly evoked 1640s France with powdered wigs and neckline. But manufacturers also want to innovate. The most obvious example is the change in the famous appendage of the hero, the one that in his mind makes him unlikable: his nose, once huge. Here, it’s Dinklage’s height alone – the actor is 4ft 5 – that sets Cyrano apart. With otherness now rooted in the star’s physical reality, the result feels brave and invigorating. It also allows you to focus, without rubbery interruption, on your performance, which switches deftly between self-assurance and self-loathing. Yet that brilliance also highlights just how confusing the rest of the film is in comparison. Haley Bennett is a striking Roxane, the quick-witted object of Cyrano’s desire. But the effort to showcase her intellect is undone by the handsome Christian de Neuvillette, with whom she believes herself infatuated – rendered here as a bland, semi-comic himbo, played by the crippled Kelvin Harrison Jr. Meanwhile, Ben Mendelsohn flies and pouts like the mean Comte de Guiche (at least he is having fun).

And then there are the songs; pleasant, muted numbers from members of The National. Their bass gravity suits the uneven blue of Dinklage’s voice, even if you have trouble remembering them while they’re still playing.

This hodgepodge of tones badly needs a director who can make it complete. Cyrano has Wright, who simply superimposes his own film. The manufacturer of Atonement and Pride and Prejudice has the instinct of a model railway enthusiast, a director of epic sets filled with moving parts. He duly choreographs everything in sight with finicky grandeur, from swordplay on moonlit boulevards to dance routines during military training. Very nice, do you think. But with rare exceptions over more than two hours, it always strays from what should be the heart of the story: Dinklage and Bennett in close-up, each shaped by Cyrano’s language genius.

Frankly, Wright is an odd choice to direct a film about the power of words, things he never seemed interested in. Stranger still, he doesn’t feel very involved in the music either. Instead, the tunes are stuck in the plot, performed by actors who end each song with a slightly uncomfortable tune, as if they’ve just hiccuped in the middle of a line.

In UK and US cinemas from February 25