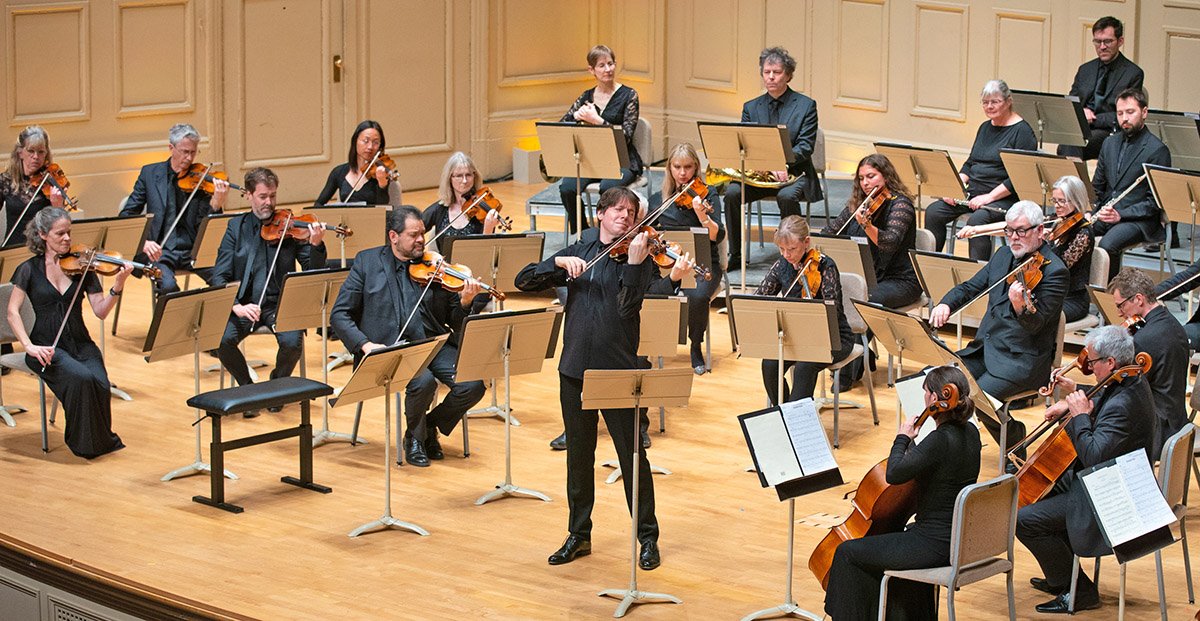 Celebrity Series of Boston brought the stellar Academy of Saint Martin in the Fields to Symphony Hall on Sunday for its 13and rewarding visit. Superstar violinist Joshua Bell took over leadership in 2011 at the end of founder Neville Mariner’s 53-year career.

I remember the admiration that struck me when I first heard their recording of Handel’s ballet music on an Argo Lp (ZRG 686, ©1972 – I still have it!) broadcast by WCRB at the right old times of this station. As soon as I could, I rushed to The Coop and Helga Newcomb pulled it off the shelf and handed it to me. My admiration for ASMF/Marriner’s musical creation only grew as I listened to this incredible recording at home. What precision, what tone, what panache, what pure perfection! Of course, the phenomenon of early instruments had yet to fully take hold here, and the opulence of these performances reached a truly narcotic stature. These qualities survive to this day.

The fast and very entertaining overture, the Rossini Overture Barber of Seville. needed a little more bass tone. Four cellos and two basses – all fabulous players – could have gone a little deeper had their numbers hit five and three. Nonetheless, it provided a bubbly, appetite-whipping aperitif before Dvořák’s rarely-encountered violin concerto, rich in flavor and seasoned piquancy.

Written in 1878/9 for the famous virtuoso Joseph Joachim, the admittedly difficult work was not premiered until October 30, 1891, then by Max Bendix and the Chicago Symphony Orchestra under the direction of Theodore Thomas. A glance at the score reveals very few moments when the soloist is not playing, and his part is not easy. It’s full of double-stops, big leaps in the melodic line, and runs the gamut of emotion. Apparently Joachim had many ‘thoughts’ on the score and ultimately never made it. “His loss”, one is tempted to say.

Joshua Bell performed solo and simultaneously conducted a violin concerto during his last visits here with the ASMF; their Beethoven and Tchaikovsky concertos still resonate wonderfully in my memory. What a challenge it must be to conduct successfully as a soloist in these concertos. Think of the disparate disciplines, the combined concentrations. It must be intimidating. Yet Bell never shows tension in his dual role, always appearing in complete control of his players and his magnificent 1713 Huberman Stradivarius.

We admire Joshua Bell on several levels, in particular his infallible precision and the beauty of his timbre over the entire range of his instrument. We live in a time when there are many truly gifted violinists, but of all of them, Bell has the most beautiful tone when he rises above the staff. In search of a suitable descriptor, the word celestial comes to mind. Yes, I know, but it’s really East so beautiful and transporting, especially in the Adagio – my non troppo second movement by Dvořák.

A real test of a successful interpretation of this piece comes in its final, marked Allegro giocoso ma non troppo. Bohemian good humor abounds, with plenty of two-on-threes stemming from traditional dance beats. Bell and his colleagues launch into a lively rhythm, which only slows when the composer asks for it at a few poignant moments. Virtuoso challenges abounded and were met, and excitement built as the end approached. With five spirited chords, the concerto ends triumphantly. The applause started, and from both sides of the stage. The ASMF visibly admires their leader and gave him a warm ovation. The audience, too, loved what they heard.

After intermission, Bell and his colleagues offered Florence Price’s three-and-a-half-minute gem Worship, a solo organ work from 1951 offered here in Jim Gray’s moving arrangement for solo violin and chamber orchestra. These few minutes were the sweetest and most moving of the afternoon. The rapturous silence at the end of this brief moment in time reminded us of how much comfort music can offer in times of conflict and illness. It was poignant, indeed, when one remembers that Price had been a student at the NEC in the 1930s and had struggled with the powers that be in Boston to have her very dignified compositions performed during her lifetime. Only now is it emerging. well done to ASMF for bringing this American work on their tour!

The Academy’s complement of 7-6-4-4-2 strings allowed the woodwinds to rise without forcing and sonorously in a deliciously lively and balanced transparency of sound not often encountered when large orchestras play Mendelssohn. Italian Symphony. Bell didn’t leave enough room to breathe and relax in the two more cantabilized central movements of the symphony, but he sent the outer movements with great spirit, the Saltarello: Presto fourth being particularly spirited with its writing. swirling and swirling inspired by dance.

We look forward to the return of this magnificent set.

John W. Ehrlich is the musical director of Spectrum Singers, which he founded 40 years ago. He has been a singer and bandleader in the Boston area for over 47 years.