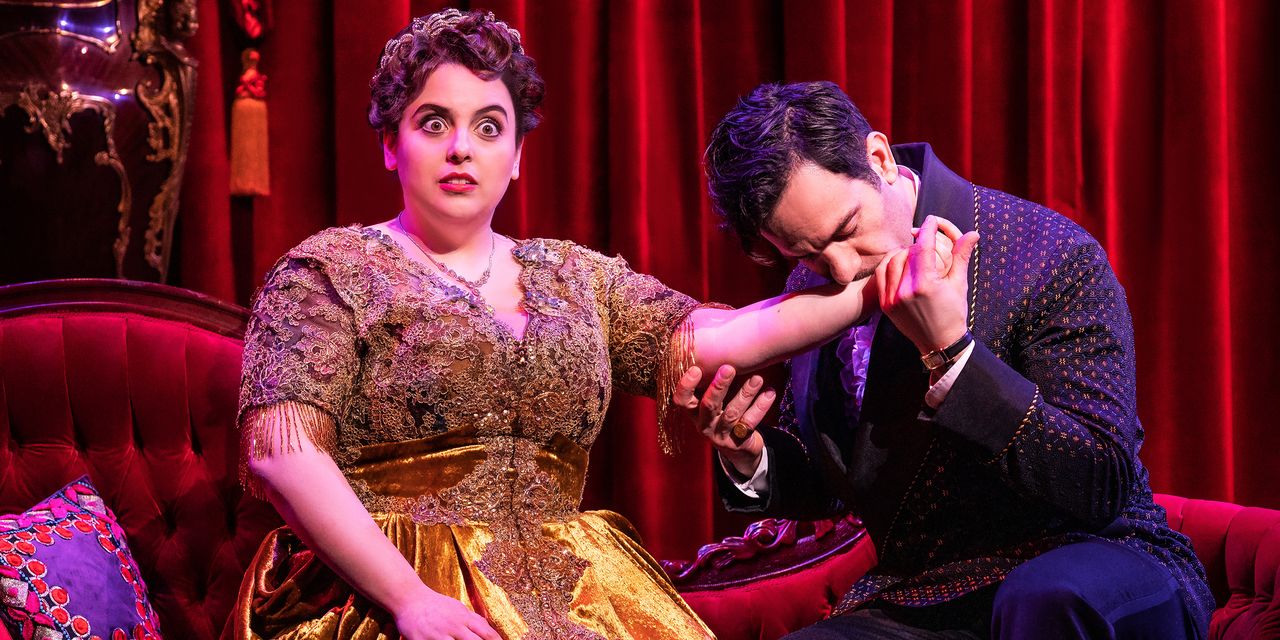 There’s a reason the 1964 musical “Funny Girl,” a Broadway hit and blockbuster movie, never saw a major revival, and it doesn’t take a medical examiner to find out. As much, if not more, than any musical, the show is indelibly associated with its original star, Barbra Streisand, around whom it was molded, if not shrink-wrapped, after its casting. And as anyone who has followed her career knows — and most are at least aware of her contours — Ms. Streisand is as singular a talent as any in American popular culture.

Until now, she was implicitly considered an impossible act to follow, at least in the role that made her a star, singer and “Ziegfeld Follies” comedian Fanny Brice in this bio-musical. Enter a spunky little dynamo named Beanie Feldstein, who dared to step into the role of the first Broadway revival, directed by Michael Mayer.

It would be worth pointing out that history has repeated itself, and once again a blazing new star has sprung into the sky, to invoke the old showbiz cliché. But my hosannas for Mrs. Feldstein’s performance must be rather muted. Something of a rising star in film and TV – she appeared in ‘Lady Bird’ and played Monica Lewinsky in ‘American Crime Story’ -Ms. Feldstein certainly deserves respect for taking on a stage role that is both iconic and complex, not to mention exacting: Fanny’s solos, duets and ensemble songs number more than a dozen. (The small handful of issues she’s not in is forgettable filler.)

Ms. Feldstein exudes a feisty brashness befitting the Fanny of the early stages, when this admitted misfit – derided as a long shot for stardom in the song “If a Girl Ain’t Pretty” – makes her way onto the stage of the vaudeville, with the help of an admirer, Eddie Ryan (Jared Grimes), and an unsentimental but supportive mother, played by Jane Lynch. She is soon discovered by Florenz Ziegfeld (Peter Francis James) and by the handsome, suave gambler Nick Arnstein (Ramin Karimloo), whom she later marries, with not entirely happy results.

Much of the story is set in song, and although Mrs. Feldstein’s vocal abilities – she has a fine, barely rich soprano and a louder belt – would easily pass the mark in most roles, the limits of her talents are on display by the towering demands of the score, with music by Jule Styne and lyrics by Bob Merrill, expressly crafted to showcase Ms. Streisand’s protean vocal gifts. Ms. Feldstein’s first major solo number, “I Am the Biggest Star,” when Fanny defiantly claims her claim to improbable immortality, leaves the question implicit in the title unanswered. Ms. Feldstein lacks the silky, jazzy sexiness required for her upcoming solo, “Cornet Man.” She is, thankfully, at her vocal peak in the closer first act, another anthem of rebellion, “Don’t Rain on My Parade,” which requires more lung power than nuance. But throughout the show, Ms. Feldstein delivers a simply competent rendition of a score that demands truly superior singing to keep the musical afloat as the laborious mechanics of the plot progress.

And speaking of nuance, while Ms. Feldstein delivers Fanny’s self-deprecating banter and occasional stumble – like when she falls off a deck chair during her seduction scene with Nick – with perfectly professional aplomb, she doesn’t. ‘never inflects a joke or a line with the “witty”, “surprising” and “delicate” colorings which, as Pauline Kael wrote in her review of the film, Mrs. Streisand magically did.

If I dwell on Mrs Feldstein (and the comparisons with Mrs Streisand, which are, yes, odious but in this unique case unavoidable), it is because Fanny is really the only significant role, despite some amplification of the smaller parts by Harvey Fierstein, who edited Isobel Lennart’s book. Nick Arnstein’s role has never really been a showcase, but Mr. Karimloo walks it in style. He got a little puffed up by giving Nick a second-act solo, “You’re a Funny Girl,” based on the title song written for the movie and sung by Fanny, but Nick seems to come and go so fast that Mr. Karimloo doesn’t have enough time to establish a layered character.

More rewardingly, Mr. Grimes, as Fanny’s ally Eddie, has a tap solo that he delivers with explosive and seemingly effortless technique. (The lively tap-dancing choreography, a welcome improvement, is by Ayodele Casel.) As Fanny’s proud and protective mother, Ms. Lynch, the former “Glee” star, gives a wonderful performance that’s dry and rich in biting humor. .

That takes care of the supporting roles, but they are molehills compared to Fanny, a character who is, along with Momma Rose in “Gypsy”, one of the great mountaineering challenges of musical theatre. At the risk of repeating myself, Ms. Feldstein deserves applause and even our affection for taking on the task. If she doesn’t quite reach the heights required by the role, that’s more a reflection of the perilous altitude of the summit than the potential of her talents.