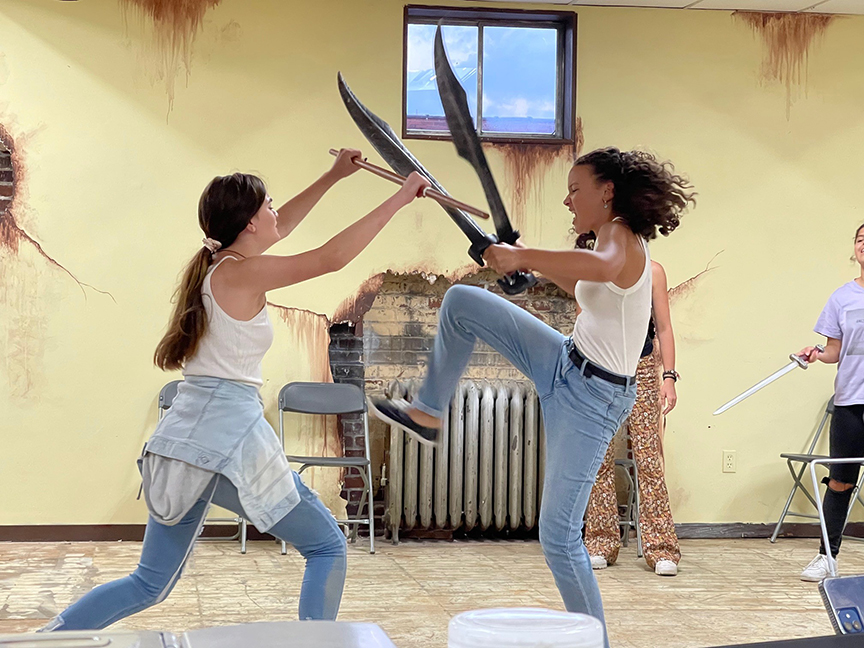 Goshen will present “The Lightning Thief: The Percy Jackson Musical” at the Hettenhausen Center for the Arts on the campus of McKendree University in Lebanon. The mythical adventure will take the stage at 7 p.m. on August 5 and 6 with a matinee performance at 3 p.m. on August 7.

“It’s a musical based on the book, and it played on Broadway for a few years before going public last year,” said Jenn Bickel, social media manager for Goshen Theater Project. “It’s a great story for anyone who’s felt like they never fit in. In movies and musicals, Percy Jackson has dyslexia and ADHD and that’s kind of his superpower.

“We have partnered with the Southern Illinois Children’s Dyslexia Center to make them aware. They also train tutors to help people with dyslexia, so it’s good to get involved.

Rehearsals for the show are held at the Goshen Theater Project, 114 W. Main St. in Collinsville. On Tuesday night, the cast and crew did a full rehearsal.

Dominic Montes plays the lead role of Percy Jackson, and the role has a special meaning for him.

“The Percy Jackson series is something I read a ton as a kid, and I probably read it five or six times,” Montes said. “He’s a character I’ve always loved, and this is the first show I’ve done in three and a half years, but I’ve always said that if Percy Jackson comes back, I’ll audition for him.

“I’m lucky to play the character, especially with this cast. They’ve been so welcoming to me and this is my first time doing a show with Goshen.

“It’s the toughest role I’ve ever played because of the physicality of all the fight scenes,” Montes said. “I don’t leave the stage at all except for intermission. There are a lot of intense fight scenes leading into great songs and it was a lot of long days, but I really enjoyed that.

Montes, who lives in O’Fallon, was home-schooled with his father in the military, and he graduated from high school in May. He has been an actor since the age of 7.

“My sister was in a production of ‘Annie’ the year before and my mom said I should audition for a show,” Montes said. “I started doing one or two shows a year, mostly chorus roles, and I liked doing it, but I wasn’t great at it.

“My freshman year of high school, I started doing about six shows a year and got involved in everything. Then COVID hit and things kind of stopped, so I thought maybe it would be -be about time I got it over with. Then the role of Percy Jackson came up and I was out of town for the auditions, so I emailed them and asked if I could send in a video audition I called my closet back when I was on vacation in Florida, but things went well and I was lucky to be a part of it.

Montes will leave Aug. 19 for Oral Roberts University, where he will major in finance.

“It was really cool that it was the last show of my high school years,” Montes said. “I don’t know if I’ll do any gigs after this year, but the opportunity to play Percy Jackson has been an absolute dream.”

Maclean Blanner, meanwhile, plays Annabeth, who is one of the main female characters.

“Annabeth is one of the half-bloods of Camp Half-Blood and her mother is Athena, the goddess of wisdom and battle strategy,” Blanner said. “She struggles with the same things Percy does, like ADHD, dyslexia and an absent mom. She doesn’t have a good relationship with her father and stepmother, and she feels a little lonely.

“Through the show, she discovers that leaning on others isn’t weak, and there’s just as much power in being with friends and connecting with other people who could also be considered misfits.”

Blanner is originally from St. Louis and graduated from Nerinx Hall in April 2022. She will be moving to California in the fall to study acting at USC.

“I started playing when I was about 6 years old,” Blanner said. “I wasn’t very good at sports, so my mum got me started with a vocal coach, who told me I should try acting. Since then, I have directed and acted in shows.

“The St. Louis Theater Community holds an awards ceremony each year to recognize outstanding community theater productions, and I remember attending one of the performances and seeing the incredible costumes and value production of Goshen. As soon as I saw them perform a number from “The Lion King”, I knew I had to work with them.

In 2020, Blanner was cast as Belle for Goshen’s production of “Beauty and the Beast,” but she was postponed by the COVID-19 pandemic and didn’t play until 2021.

“I played Sibella for a streaming version of ‘A Gentleman’s Guide to Love and Murder,’ which is a super fun musical and I had to come back this year because it’s so much fun,” Blanner said. “Goshen is one of the few companies I’ve worked with that truly values ​​every cast member and the costumes and sets are exceptional.”

Blanner is especially thrilled to play Annabeth in “The Percy Jackson Musical.”

“I love the story because I feel like everyone can relate to some aspect of it,” Blanner said. “The story follows a young boy with dyslexia and ADHD, and he doesn’t know who his father is, and he resents him. Even though we don’t struggle with ADHD, dyslexia or lack of ‘a parent, we can understand the feeling of being unwanted in certain circumstances.

“There’s a lot of pyrotechnics and crazy sword fights, but what really appeals to me about the story is the idea that we’re not alone and the family you’ve chosen is just as important as the family we were born into.”

Case Warner, who will be a junior at Edwardsville High School, plays a variety of ensemble roles and is a “swing actor,” meaning he can fill in for other actors when needed.

“I was cast as an understudy for two specific characters, but over time I was the person the director could rely on,” Warner said. “I was considered by this term (swing actor) throughout the process, and I really appreciate that. It’s a new experience for me and it has pushed my abilities as an actor.

Warner plans to major in acting in college, possibly at the University of Michigan, and acting is a big part of his life.

“There have been four main stage productions at EHS since I’ve been there and I was fortunate to have been part of four on stage,” Warner said. “I’ve been playing since I was 7 and started doing a few little shows at YMCA camps and stuff like that, and I’ve been playing for Goshen since I was 9 and my first show was ‘Peter Pan’, which was a super fun experience.

“Goshen is very dedicated to the art and for a community theater we are incredibly professional. There are a lot more responsibilities when your passion goes into a show. They expect you to know your role and be able to carry some of the weight. All the directors care about it and our music directors and costume designers are dedicated to the process as well.

Like Montes and Blanner, being part of “The Percy Jackson Musical” is something special for Warner.

“It’s about this kid who has ADHD and dyslexia and struggles with being a half-blood,” Warner said. “He must realize that self-acceptance is important before being accepted by others. It’s the biggest message of the show, that you have to believe in yourself before others can see it. This will speak to a lot of people.

“For anyone who has read the books and grown up with them like me, it’s going to be super entertaining and bring back a lot of memories.”

Terry Pattison is the show’s director and costume designer, and she’s a veteran of many Goshen Theater productions.

“I’m more of a behind-the-scenes person, as a set and costume designer, and I work in St. Louis as a production designer for a corporate events company,” Pattison said. “We do a lot of custom builds, which is a lot like stage design.

“My daughter (Halli) and I have always done shows together. She’s a big theatrical and she’s getting her MFA (master of fine arts) for performing in London, but she’s actually here now doing an appearance in this show and she’s also the fight choreographer, she’s the one who encouraged me to do directing and that’s why I do theater.

Pattison thinks audiences will enjoy “The Percy Jackson Musical” as much as the cast and crew enjoyed rehearsing.

“Usually when I’m interested in a theatrical production, I’m looking for the creative challenge, and I chose this show for the challenge of lighting design, monsters and all that crazy stuff,” Pattison said. . “Then I got the script and read it and it’s a really good story. It follows Percy Jackson’s story more closely than the movies and is more faithful to the books.

“I also like the underlying principles of this stage production. It’s about feeling abandoned and growing up without a parent, and dealing with disabilities because Percy is dyslexic, and that’s why we partnered with the Southern Illinois Children’s Dyslexia Center. He has great morality that everyone can relate to and among my favorite lines, “normality is a myth”. The things that make you different are the things that make you strong.

The show lasts approximately 2h30, including 15 minutes of intermission. Tickets can be purchased at https://gtp.booktix.com/.

Prior to the show and during intermission, audience members are encouraged to visit the concession stand, which will include many blue food items.

“If you’ve read the story, you’ll understand why we’ll only be offering blue food,” said Bickel, whose duties also include merchandising, concessions and house manager for shows. “However, don’t let the color blue fool you; we will have many delicious dishes to choose from, even if they are not traditionally blue.

For more information on past, present and future shows, visit https://www.goshentheatreproject.org/.