In Jacob and Wilhelm Grimm’s 1812 Rumpelstilzchen, a miller grants his daughter to the king after misleadingly describing her ability to turn chaff into gold. The main character, an imp with powers similar to those of King Midas to turn everything he touches into gold, helps the girl in exchange for her firstborn. When he returns several years later to claim his prize, Rumpelstilzchen gives the miller’s daughter, who has become queen, three days to guess his name. On the last day, after hearing Rumpelstilzchen sing, she guesses correctly and the imp dies.

Epstein twists Grimm’s story, seeking an explanation for the eponymous character’s actions where the original provides none. The libretto, written by Epstein and Greg Smucker, begins with the lines “she turns away from me / he turns away from me / everyone I meet turns away from me / in fear and disgust”. This theme of familial – as well as societal – rejection and otherness resonates throughout, expressing Rumpelstiltskin’s search for a child in his desperate longing for love. Through his remark, “No one ever loved me / I’m too hideous to be loved”, Rumpelstiltskin finds similarities to the miller’s daughter; this near-love scene makes the ending all the more painful, but also provides one more reason – unrequited love – behind her quest for a child.

Epstein and Smucker later imply that Rumpelstiltskin is the king’s son, and in a cyclical final scene, Rumpelstiltskin turns into the queen’s child instead of dying. The King puts the Queen and her father to death, but lets the child-Rumpelstiltskin live, foreshadowing another iteration of the story. And, while the miller’s daughter is not named in the Brothers Grimm’s version, Epstein and Smucker name her Gretchen, a nod to the similarities between this weaver and Goethe’s character. Faust.

But above all, Epstein made the conscious decision, as she reported in an interview on Rumpelstiltskin, “to turn all the other genre aspects of the opera onto [their] to manage[s].” She cast the main character as the high soprano and the sucker as the countertenor; the king is the only traditional male voice. By refocusing Rumpelstiltskin as a tale about motherhood and the relationship between children and their (missing) mothers, Epstein offers a quasi-feminist reading.

Epstein’s evocative, fractured music rightly accompanied the narrative. Alto saxophonist Philip Stäudlin, violinist Lilit Hartunian, cellist Stephen Marotto and percussionist Mike Williams aptly performed the unusual score. Underpinned by short, fragmented instrumental lines, the orchestration carefully interweaves strange percussive sounds. But with Epstein treating the saxophone like a stringed instrument, the whole thing blended seamlessly, creating a unique sonic world. It also incorporates a few leitmotivs, including an arpeggiated figure to resemble the spinning wheel. I was particularly impressed by the wide variety of textures evoked by the small group, testimony to the skills of the composer and the performers. 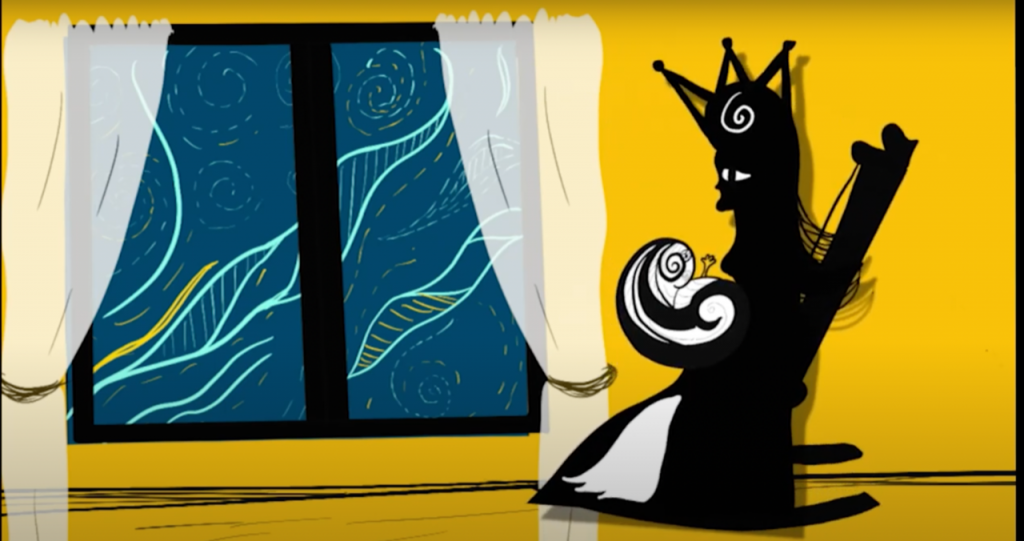 Khateri’s animation set the scene brilliantly. His shadow puppet was the perfect mix of poignancy and chilling: Rumpelstiltskin looked like Elephant Man and the King looked like a vicious autocrat. But his artful backdrops showed the most talent. Via rich golden colors, the straw of Gretchen’s spinning wheel became stars and planets in the night sky, a broken umbilical cord and the castle walls. And, echoing Epstein’s leitmotif, snake-like strands subtly connected scenes and characters, oscillating between Gretchen’s hair, the letters of Rumpelstiltskin’s name and their natural surroundings. In a particularly powerful moment at the end of the opera, Rumpelstiltskin’s face unfolds, once again connecting the lives and fates of Epstein’s exciting characters.

Gareth Cordery, a first-year Ph.D. studying historical musicology at Columbia University, majoring in music and history at Middlebury College. He has performed piano concertos with symphonies across the United States and lives in New York.