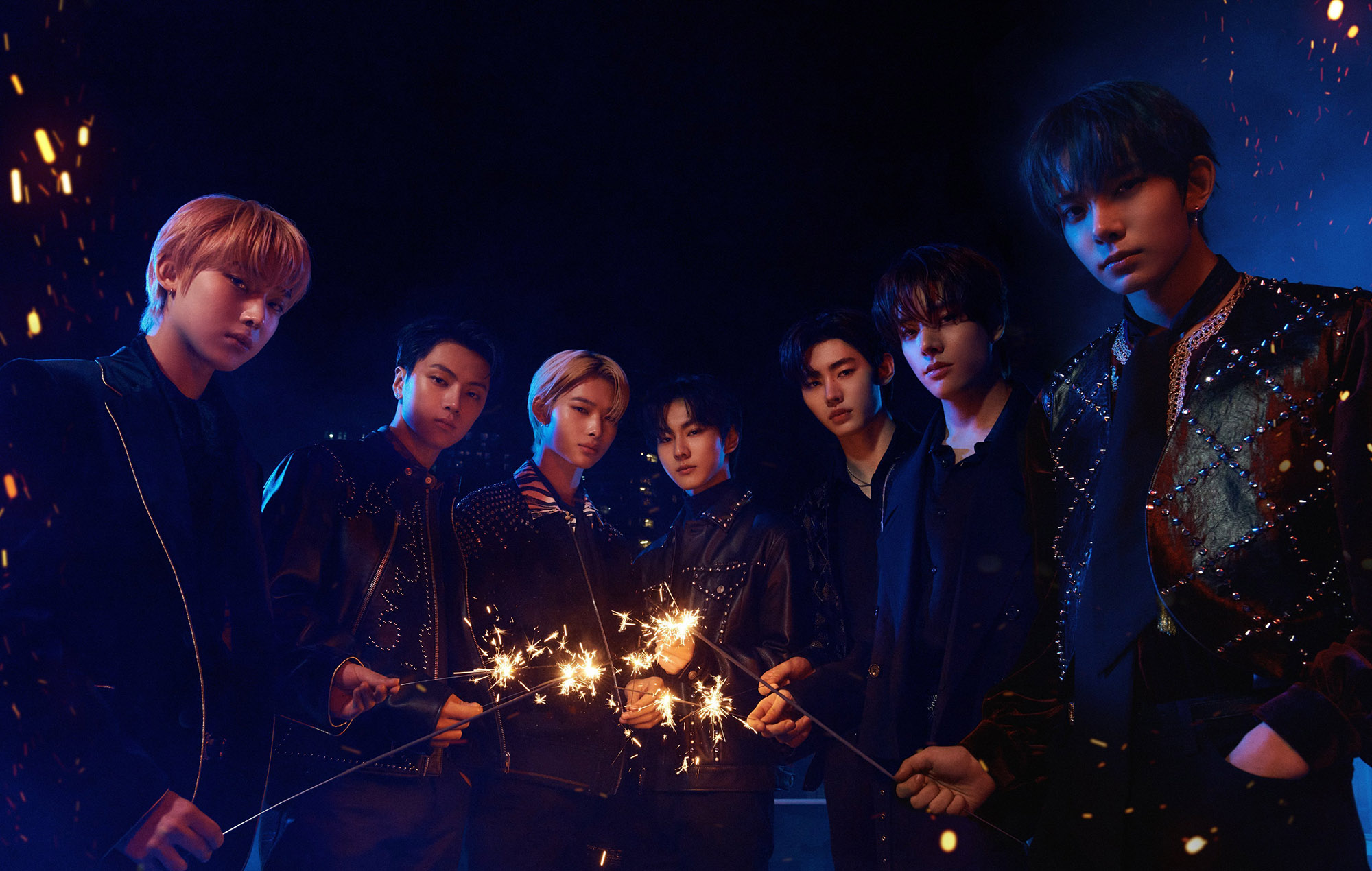 “If there is light, there must be shadow”

A hyphen is a bridge between words. He does not let them compete against their will, forming entirely new compositions like “football”, “rainbow”, “passport”; or allow intimidating spaces, as in “high school”, “ice cream”, “full moon”. Instead, a hyphen gracefully connects, ensuring meaning can flow from side to side, while retaining individuality: ‘Given-Taken’, ‘Drunk-Dazed’, ‘Blessed- Cursed’.

The above song titles belong to ENHYPEN, a K-pop boy group whose name was inspired by the symbol and aiming for a similar connective trajectory. “Music, in general, has a very powerful message,” says Brisbane-raised Jake, whose charming accent and soothing voice fills the room whenever he speaks – or sings. “Not just K-pop, but I believe a lot of people in the world can identify with others and can become so through music. I think we’re trying to send that message.

In a Zoom call with NME, the seven members of ENHYPEN come together to talk about another metaphorical bridge they are about to cross. In less than 48 hours, the group will hop on a plane to Frankfurt, Germany to attend Europe’s first K-pop mega-festival, KPOP.FLEX. The event, which took place on May 14 and 15 at the Deutsche Bank Park stadium, represented a major milestone for the group: it was their first large-scale, in-person overseas showcase.

“We’re really excited because we’re doing our first performance for [our fans] ENGENEs overseas,” said haunting performer and devoted leader Jungwon. “It’s actually my first time going overseas,” added the sweet Sunoo, who captivated the audience with a mischievous look on stage. “The biggest difference I expect is the languages. I’m sure they’ll speak different languages, so I think it’s going to sound very novel.

Sunoo was right: over its two days, more than 65,000 people from more than 80 countries attended the festival. While ENHYPEN only performed on the first, they were one of the most anticipated bands and their charisma dominated the room. After a thrilling entrance to Mix & Match’s ‘Bleeding Darkness’, they performed their latest hits ‘Drunk-Dazed’, ‘Fever’, ‘Tamed-Dashed’ and ‘Blessed-Cursed’. Between songs, the septet also interacted with the audience via on-screen prompts and sang a few verses together from “Polaroid Love,” their recent viral TikTok hit.

The experience was memorable, but it also came with a hectic schedule: ENHYPEN arrived in Frankfurt just hours before rehearsals on May 14 and returned directly to Seoul the following day. Since the schedule was so packed, they all hope to explore the country better in the future, when they come back with more time. “Mostly because we want to watch football. There are a lot of football fans here,” added Jay, whose sleek and stylish aura hides a caring and effortlessly fun personality.

K-pop idols invariably get used to tough routines, but how does ENHYPEN get in the right frame of mind to perform, even after 13 hours of flying? “I try to stay calm and go over all the things I need to focus on,” says Jake. Versatile and well-known homebody Heeseung, on the other hand, shares that “we do a series of music shows when we do our comebacks, and if you go to those broadcast stations, there are a lot of mirrors. So I watch them, I do warm-ups, dances. I drink a lot of water [too].”

During their brief 25 minute set, it became clear that KPOP.FLEX was just a simple teaser of what ENHYPEN is truly capable of. Heeseung, snuggling up in his gray hoodie, mentions that one of the team’s greatest strengths is their versatility, in which they’re “good at shrewd performances, but also sweet and charming songs ‘like’ Polaroid Love” – ​​his favorite track to perform live.

At the moment, former figure skater and princely singer Sunghoon is also taking time to reflect on his favorite track. Not missing a chance, Jay looks at him and snaps, “‘Hey Tayo’?” Make the whole group burst into laughter. (‘Hey Tayo’ is the theme song of the Korean children’s animation show Tayo the little busfor which ENHYPEN made a remake MV that is both delightful and hilarious to watch).

“Personally, I would choose ‘Go Big or Go Home’,” Sunghoon finally decides. “We played it at our fan meeting [in Korea] and I got a lot of energy out of it, because there’s a dance break in the middle of the song,” he explains, referring to when ENGENE chant their names to cheer them up. “I forget that I’m tired, I forget that the choreography is really difficult and I just enjoy the performance.”

“When it comes to ENHYPEN’s music, we can’t go on without talking about our perfectly synchronized choreography,” adds Ni-ki, the Japanese dance prodigy and youngest member at 16. “Every time we come back, we have such cool choreography, and I think ENGENE like it a lot too. But according to Jay, the real treasure of ENHYPEN is in their lyrics: ‘We have a [delivering] deep messages in our songs. We show things we mean” – a statement that Jake completes with “all the songs we release are about us and show what we have been through”.

Since their debut in late 2020, ENHYPEN has sought to bridge the inherent dichotomies of life, often giving meta glimpses into their lives as rising K-pop idols. “But here I go now, I follow my dreams / Drive through the question for life / Between give and take / It’s time for me to prove” they sing on the sibylline ‘Given-Taken’.

2021’s single “Drunk-Dazed” explored the heady carnival of fame, where they discover that all that glitters isn’t gold; the “Tamed-Dashed” summary was about “putting actions before words”, as Jay explained in an interview with Weverse Magazine; and January’s “Blessed-Cursed” saw them shout “Damn your rules” over electrifying guitar riffs, reminding us that curses can be blessings in disguise.

Now, with KPOP.FLEX and all their landmarks behind them, they’re ready for the next bridge to cross. As the new hair colors suggest, a comeback is already underway (“Maybe, maybe not,” Jake jokes, but Sunoo, who’s sitting behind him, vehemently points his thumb up). With each release, ENHYPEN finds new ways to integrate these dualities, and therefore to gain more self-confidence. Sunoo says he feels the difference as they have “improved in terms of skills” since their debut, while Jake says they are “able to be more relaxed now” when on stage.

This is also seen throughout the interview. They joke comfortably with each other – push one’s back here, grab the other’s thumb there. The more talkative members encourage the quieter ones to talk, but take the lead when necessary. A sweet fraternity reigns between them; an optimistic knowledge that no matter what happens, they can count on each other.

Often referred to as “the new K-pop destination,” a title that suggests their music is a leading vehicle, ENHYPEN travels from frontier to frontier, experience to experience, connecting worlds together. And if you place a series of hyphens one after the other, they will eventually become a line – a solid path supporting those who walk on it. A card that recalls the multiple dimensions of life.

“We can’t have it all, but I think there are more things we win than we lose. So let’s say in exchange for [doing what we do]we lose time, but we gain more [love] from our fans,” Jungwon says, endearingly puffing out her cheeks and puffing out her pink bangs as the performer relays her words. “I believe there are two sides to everything. If there is light, there must be shadow.