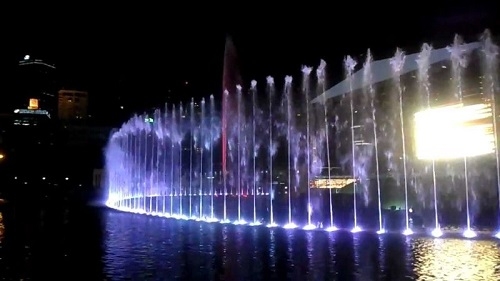 The country’s largest musical fountain has finally started taking shape at Lake Futala in Nagpur after a delay due to the pandemic. The musical fountain, which is considered the largest in the country and also among the top five in the world, is expected to start operating in May this year.

the project. The show at the musical fountain will be a first of its kind since it will present the

world-class technology in Nagpur, wildlife and feature film director Alphonse Roy said at a press conference at the Lake Futala premises on Wednesday.

The characteristic musical fountain tune is prepared by AR Rehman. This free show will bring together music, lights and sounds to take people on an incredible journey.

The history of the city of Nagpur will be told during the show in three languages. Hindi language narration will be provided by the voice of Gulzar, Marathi

bringing their expertise to this project.

Crystal Group, France, which was instrumental in the creation of the “Wings of Time” show in Singapore and the United Arab Emirates’ anniversary celebrations at Expo Dubai, among others, was associated with the creation of the musical fountain. They also have the most patented fountains in the world.

This project is the largest project of the Crystal Group in which it introduces many new technologies for the first time.

Stage Gear, a leading event technology company founded by Shailesh Gopalan, will take care of the complete integration and synchronization of the fountain, sound, light and visual that are part of the show.

The 35-minute show has four sections. It will also include an audio-visual presentation of the history of Nagpur.

A special bank of medleys based on different themes including Hindi and Marathi films and classical numbers have also been created to be part of the show.

Studio One Khalatkar Construction Consortium is executing the construction works and providing full support to the entire team.

Astrid, from Crystal Group, said: “Nagpur’s scorching climate is the biggest challenge for the project team. We work early in the morning and in the evening. Although the project is delayed due to the pandemic, it will be completed before May.

Civil contractor Jayant Khalatkar and Eric of Crystal Group were also present at the press conference.

2022-03-17
Previous Post: Community Theater and DHS Team Up for Broadway Musical
Next Post: Size of the musical instrument amplifiers consumption market by 2022-2029