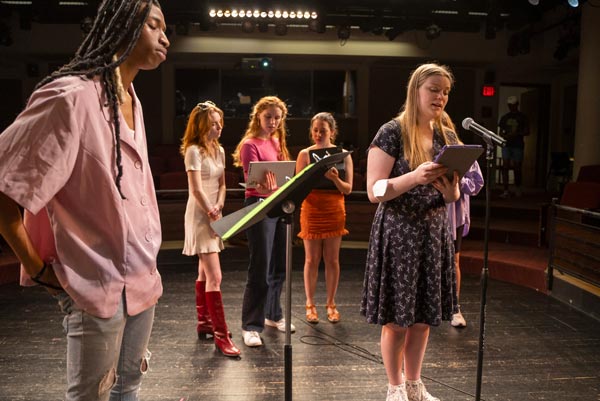 (PRINCETON, NJ) — Princeton University Lewis Center for the Arts presents a platform performance of Athens, Georgiaa new rock musical based on the ancient Greek play Frogs by Aristophanes, with music composed by Tony Prize winner Stew, and book and lyrics by Pulitzer Prize winner Paul Muldoon. The show will take place on Wednesday, April 20 at 4:30 p.m. at the Hearst Dance Theater on the Princeton campus. It will feature Princeton students from the Atelier Spring Course of the same name, as well as guest appearances from Tyquan Malik White as Little Richard and Roman Banks as Chuck Berry.

Commissioned by the Public Theater of New York, Athens, Georgia resets ancient greek comedy Frogs squarely in 2020s America and combines slapstick comedy with social justice. In the original, the god Dionysus, who is depressed by the state of contemporary Athenian tragedy, travels to visit Hades in the underworld in hopes of bringing the great Greek tragedian Euripides back from the dead. Dionysus asks Hercules for advice on the best way to get to the Underworld, eventually deciding to copy Hercules’ journey and row across a lake with the ferryman Charon. Finally, in the underworld, Dionysus finds Euripides challenging Aeschylus, often considered the father of Greek tragedy, to a battle of verse to determine which of them is “the best tragic poet”. Dionysus is asked to judge the contest and begins to wonder which of the two he will bring back to life. Bringing it into the modern era, Athens, GeorgiaThe main characters of include rock god Dionysus, guitar hero Hercules, Chuck Berry, Little Richard and, of course, the Real Housewives of Hades.

“The opportunity to develop this musical with the help of our extremely talented students has been a blessing,” said Muldoon. “In addition to our students performing as musicians and singers, we were able to benefit from class visits from Barbara Graziosi and Emily Greenwood, both from our classics department, who helped contextualize Aristophanes in his time. Michael Cadden regaled us with stories about his involvement in the Sondheim version of frogs presented in the Yale pool in 1974 while Grace Elizabeth Hale gave us the background for her book, Cool Town: How Athens, Georgia launched alternative music and changed America Culture.”

The event is free and open to the public, however tickets are required through the university ticket office. All guests should be fully vaccinated against COVID-19 where possible, which now includes a COVID booster shot for all who are eligible to receive it, and wear a mask when inside. Please note that performers may be unmasked on stage. Guests requiring access accommodations are encouraged to contact the Lewis Center at [email protected] at least one week prior to the event date.

Stew is a Tony Award-winning and two-time Obie Award-winning playwright/performer, critically acclaimed singer/songwriter, and “veteran of multiple dive bar scenes.” His works include the rock musical strange passage, winner of a 2008 Tony for Best Musical Book, two Obies for Best New Play and Best Ensemble, and three Drama Desk Awards for Best Musical, Best Lyrics and Best Music. He has also released 12 critically acclaimed albums written between 1999 and present by Stew & The Negro Problem and wrote the music for Spike Lee’s TV show, She must have it. Currently a visiting lecturer at Harvard University, Stew’s classes are recognized as “nurseries of multidisciplinary and thought-provoking experimentation that foster festive transformation through mythmaking.” His classes are also informed by the spontaneous immediacy of rock club survival tactics and the human grandeur of theater. As an instructor, Stew strives to demystify the creative process for students, while simultaneously inviting them to create myths from their truths, so that those truths can deepen and shine brighter.

Paul Muldon is the Howard University GB Clark ’21 Professor of Humanities at Princeton, as well as the Founding President of the Lewis Center for the Arts. As an internationally acclaimed Irish poet, Muldoon has been described by Times Literary Supplement as “the most important English-language poet born since the Second World War”. Muldoon won the Pulitzer Prize for his ninth book of poetry, Medium sand and gravel (2002). Additionally, Muldoon won the 1994 TS Eliot Prize, the 2003 Griffin International Prize for Excellence in Poetry, the 2004 Shakespeare Prize, and the 2006 European Prize for Poetry, among others. His fourteenth volume of poems, Howdie Skelp, was released in November 2021 by Farrar Straus & Giroux. Muldoon is the editor of the recently published Paul McCartney two-volume set, The lyrics: from 1956 to the present day, illuminating the stories behind 154 McCartney song lyrics. As a musician, Muldoon is a member of rock band Rogue Oliphant, specializing in songs and spoken word.

To learn more about the Princeton Atelier, the Lewis Center for the Arts, and the more than 100 public performances, exhibitions, readings, screenings, concerts, lectures, and special events presented each year by the Lewis Center, most of which are free, visit arts.princeton.edu.

2022-04-14
Previous Post: What to expect from the TikTok-ordered musical for you, Paige Live Streaming April 14
Next Post: ELVIS THE MUSIC, MAMMA MIA! & More