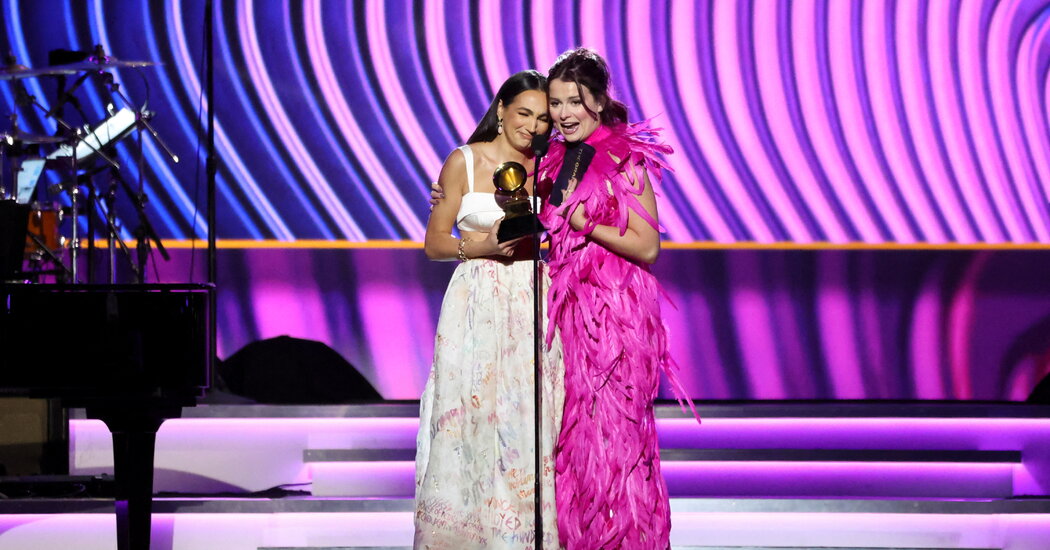 Netflix has sued the team behind ‘The Unofficial Bridgerton Musical’, claiming the Grammy-winning songwriter-songwriter duo infringed the hit show’s intellectual property, according to a lawsuit filed in U.S. District Court in Washington. , DC

Abigail Barlow and Emily Bear staged a sold-out “for-profit” show at the Kennedy Center on Friday, with ticket prices of up to $149, without Netflix’s permission, the lawsuit filed Friday claims. Barlow and Bear have also promoted branded merchandise and have plans for future performance at London’s Royal Albert Hall, according to the suit.

Barlow and Bear, who first gained popularity filming “Bridgerton”-themed TikToks, won this year’s Grammy Award for Best Musical Theater Album, beating Andrew Lloyd Webber’s “Cinderella” and ” Girl From the North Country” by Conor McPherson. The 15-song ‘Unofficial Bridgerton Musical’ album featured songs written from the perspective of the Netflix show’s central couple, Daphne Bridgerton and Simon Basset, the Duke of Hastings, and was shaped by audience feedback from the media social of composers.

“Netflix supports fan-generated content, but Barlow & Bear have gone further, seeking to create multiple revenue streams for themselves without formal permission to use the ‘Bridgerton’ IP,” Netflix said in a press release by e-mail. “We tried very hard to work with Barlow & Bear, and they refused to cooperate.”

Barlow and Bear did not immediately respond to a request for comment on Monday. In an interview with The Times after winning the Grammy, they said Netflix gave their lawyers the green light to turn their songs into an album. But when asked at the time if the musical was likely to be staged in the future, Bear said: “It’s a bit out of our yard because we don’t own the property. intellectual”

Among the lawsuit’s specific objections, he claims that the musical’s opening track, “Tis the Season”, uses dialogue similar to that spoken by Lady Whistledown, the town gossip writer, in the TV series. , and says that the track “If I Were a Man” reflects the desire of Eloise Bridgerton’s character to escape the cage of marriage.

Netflix sued Barlow and Bear on four counts, including copyright infringement and trademark infringement. The lawsuit said Netflix had been willing to negotiate a license that would allow live performances and album distribution, but the pair refused.

The ‘Bridgerton’ series, produced by Shonda Rhimes and based on romance novels by Julia Quinn, details the 19th century English marriage market with modern twists, reflecting a diverse cast and classic versions of pop music hits. .

“There is so much joy in watching audiences fall in love with Bridgerton and watching the creative ways in which they express their fandom,” Rhimes wrote in a statement. “What started as a fun celebration by Barlow & Bear on social media has turned into a blatant intellectual property grab solely for Barlow & Bear’s financial benefit.”

After the release of Barlow and Bear’s album, according to the lawsuit, Netflix informed the two that it would not allow live performances that could conflict with events like “The Queen’s Ball: A Bridgerton Experience.” , which Netflix held in several cities. Guests can interact with “Bridgerton”-themed characters in a Regency-era setting at the events, complete with ballgowns and live music from the show’s soundtrack.

Quinn, who described Barlow and Bear as extremely talented, wrote in a statement that she was thrilled when they started performing on TikTok and composing songs dedicated to “Bridgerton.” On the other hand, there is a difference between posting on TikTok and seeking commercial gain, she wrote.

“I hope Barlow & Bear, who share my position as independent creative professionals, will understand the need to protect the intellectual property of other professionals, including the characters and stories I have created in ‘Bridgerton’s novels. ‘ over 20 years ago,” Quinn wrote. .