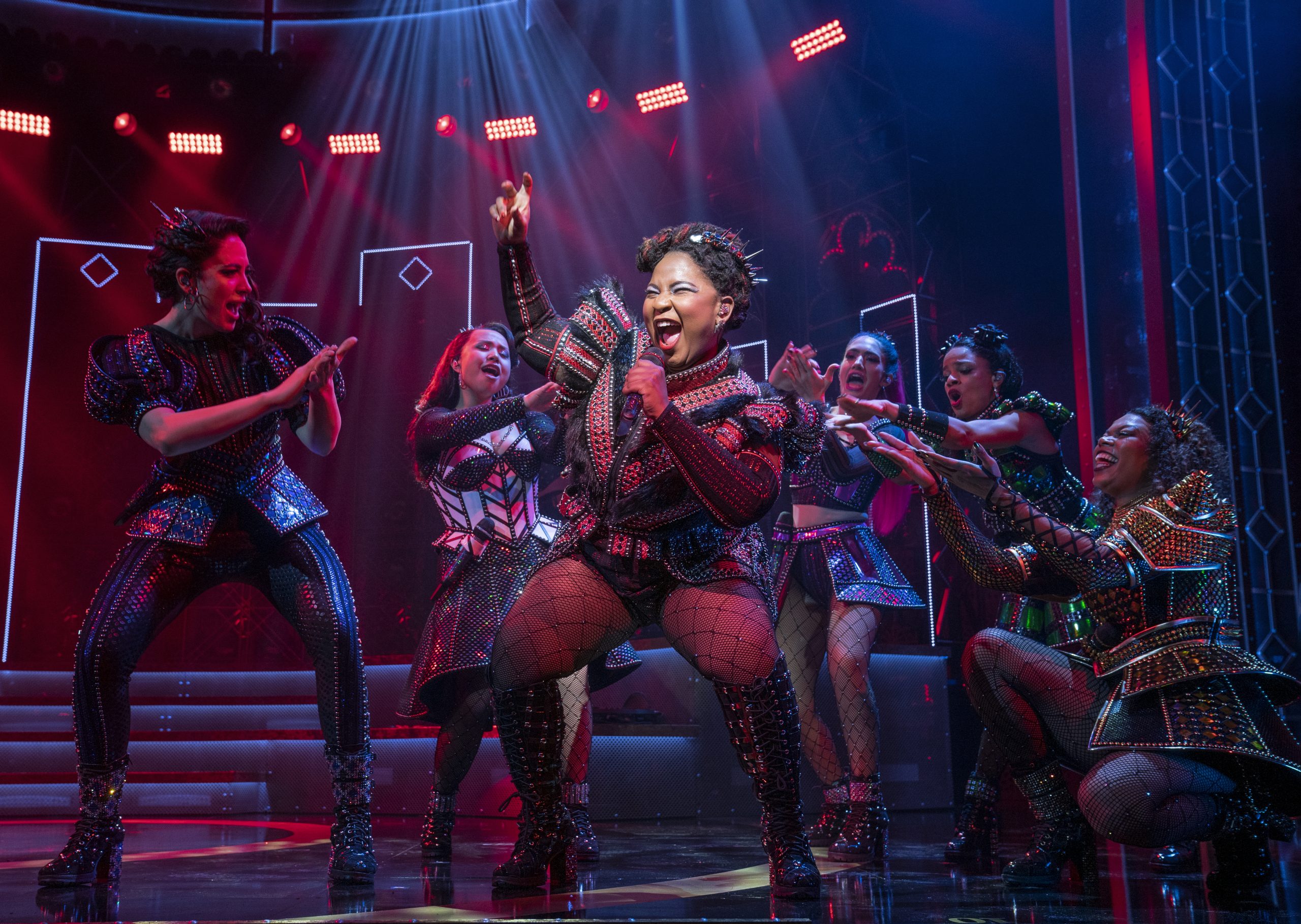 City Lights this week includes SIX at the National Theatre, two screenings of retro films, golf in a new location and an artist talk on existentialism. Events selected by us for you.

Even though the sport of golf is centuries old, it is still considered by some to be an exclusive and expensive pastime that requires membership fees and expensive equipment. Cash rate is looking to change all that with the opening of City Swing on July 7th. Cash, a former Tesla and Under Armor executive, realized early in her career that her love of golf, something she started casually as a child, was hugely beneficial. “Knowing how to play golf has allowed me to connect with the leaders of all these very different businesses and build relationships in a way that I otherwise wouldn’t have had the opportunity to,” Cash says. “There’s no doubt that it helped further my career.” The realization that none of her girlfriends played golf and weren’t comfortable being complete amateurs on a course, sparked the idea for City Swing, which started as a pop-up in 2018. Now at its permanent location on New York Avenue NW, people can learn about the game in an inclusive environment. With simulators that show various courses from around the world, players can take lessons with a certified instructor, compete in a league, or practice their swings. In addition to the physical location, Cash has also created the City Swing Golf Truck, a golf simulator on wheels that will go into communities that don’t typically have access to the sport. Additionally, City Swing’s non-profit arm, the City Swing Foundation, will help underrepresented and underserved communities get into the sport. “It’s a great gift to give a child the opportunity to feel comfortable on the golf course because even though I didn’t play seriously as a kid, as soon as I started playing for professional reasons, I had a bit of a foundation to build on and that really made a difference in how quickly I started enjoying the game later in life,” says Cash. city ​​swing opens July 7 at 901 New York Avenue NW. cityswingdc.com. —Christina Smart

Ongoing until September 5: SIX at the National Theater

Divorce. Decapitated. Deceased. Divorce. Decapitated. Survived. The first lines of SIX enumerate the fates of Henry VIIIof half a dozen wives, and despite sounding rather sinister, the statement has already become an iconic musical theater intro. SIX opened an ambitious two-month run in Washington this week on July 5, the longest tenure a cast has had at the National Theater in more than a decade. This is the second stop for these touring queens, who have settled in Chicago for three months. The musical is essentially a clever concert, full of great pop-rock vocals, witty 16th-century banter, and quotes from the era-appropriate “Greensleeves.” Here is the concept: Catherine of Aragon, Anne de Cleaves, and their fellow ladies waiting to lose their minds go head-to-head to prove that their royal wedding ended in the most tragic story. Cambridge College Best Friends Toby Marlow and Lucy Moss wrote SIX as fourth-year students in 2017, and since then they’ve driven the musical juggernaut from the Edinburgh Festival Fringe, to the West End, to Winnipeg, to cruise ships and finally to Broadway, where the show won a Tony Award for best score in June. Each of Henry’s exes has a “Queenspiration” or two, drawn from the last decades of popular music, including Beyonce, Adele, April Lavigneand Alicia’s Keys. It’s a breaking anthem contest for the ages, and you’ve got all summer to see it. SIX works tuntil September 4 at the National Theater, 1321 Pennsylvania Ave. NW. broadwayatthenational.com. $65 to $150. —Rebecca Ritzel

In “Multiverse II”, one of the artists Priya VadhyarIn recent works by , currently on display at Material Things Studio in North Brentwood, a misty white bloom seems to cross intersecting twilight planes, calling for thoughts of existential nature – the kind of thoughts best put to bed before sunset. Again, it is the exact, albeit difficult, reflections that are often the most prescient, as Vadhyar’s work proves. The artist, whose ephemeral collections in acrylic and water-soluble graphite have earned him a worldwide reputation, is inspired by what the science writer Loren Eiseley dubbed the “inner geography”, the inaccurate and astute investigations of the ever-expanding “inner universe” which, he wrote, must accompany the exploration of the galaxies (or everyday, magical world) beyond. Through drippings of weeds and lines that evoke whole characters (as seen in “Surge”), Vadhyar demonstrates his love for the brush and ontology, reminding viewers of the uncertainty of life and the impermeability between the two. In the midst of this pretty chaotic mess, the self emerges, both omniscient and lost, trying to understand its physicality in the liminal. Still, there are moments of clarity; in the carefully placed trinkets of the artist’s studio (shells, beaded thread, a worn copy of Virginia Woolfit is At the Lighthouse, hence the exhibition, titled corner of darkness, takes its name) and in the definitive lines that run through lightly blended color structures, as seen in “Sliver (Fleeting).” For even in dew-covered abstractions, where graphite or paint seem to have ‘bled’ under Vadhyar’s guidance, there is an assured faith – a faith in the fluidity of life and in the paradoxes of the known and, as calls it Vadhyar, from ‘non-‘. known.” The exhibit runs through July 16 at Material Things Studio, 4531 Rhode Island Ave., North Brentwood. (Tuesdays 4-7pm and Sundays 12-3pm) Artist Talk starts at 17 hours July 9. materialthingsstudio.com. Free. —Emma Francois

Sunday: Dr. Jekyll and Mr. Hyde at the National Gallery of Art

“Most people never have to realize that at the right time and in the right place, they are capable of anything.” From the 1972 classic Chinese district, this quote is an example of an age-old literary theme: our divided human nature. In this spirit, the National Gallery of Art, alongside its exhibition The Double: identity and difference in art since 1900, features the compelling film series Dark Mirrors: The Double in Cinema. The program kicks off July 10 with a 35mm director’s print Rouben Mamoulianthe innovative 1931 horror film Dr. Jekyll and Mr. Hydeadapted from Robert Louis Stevensonthe timeless story of a respected London doctor (Frederic March) whose alter ego is a monster (and looks like a funhouse jim carrey). The mad scientist’s fatal mistake is his desire to play God: he concocts an ominous swirling potion that he hopes will insulate the brain’s moral center and encourage good behavior. Alas, the experience backfires, and bad teeth and bad behavior come out of it. Director of Photography Karl-Strussone moment vogue photographer, uses a subjective camera to immerse us in the point of view of the good doctor, the adored fiancée (Rose Hobart) to the horrible transformation. Struss frequently deploys clever camerawork, such as a series of extreme close-ups of eager eyes anticipating Sergio LeoneSpaghetti Westerns. The visual dazzle will be a treat to see on the big screen, and doubles as a surprising reflection of Jekyll’s inner turmoil. While the hairy beast that emerges may seem like an old-fashioned camp, the grim spectacle of shame and condemnation resonates uncomfortably with our own deeply divided time. Dark Mirrors: double on cinema screens Dr. Jekyll and Mr. Hyde at 2 p.m. July 10 at the National Gallery of Art, East Building Auditorium, 4th Street and Constitution Avenue NW. nga.gov. Free, registration required. —Pat Padua

Tuesday: Can I hit him? :The Warriors at Franklin Park

On July 12, DowntownDC’s summer movies CAN I KICK IT? the film series will show the 1979 dough classic The Warriors. Set in the wee hours of New York City, the eponymous team is wrongfully accused of killing a gang leader, leading to an all-out turf battle stretching from Coney Island to the Bronx. Impetuous, daring and badass, it is the cinematic juvenile delinquency par excellence. What makes this experience even better, besides taking place under the stars, is that it will be rated by DJ 2 Tone Jones, half of the creative collective DC Shaolin Jazz. In 2019, can I kick it? bring The Warriors at the Kennedy Center – one of Jones’ favorite movie events he ever scored – and later at Hudson River Park for their Manhattan outdoor debut in front of over 600 moviegoers. “I actually plan on revamping the movie soundtrack again,” 2-Tone said. city ​​paper. “It will include original breaks and hip-hop tracks that complement the era of gang culture in New York in the late 70s and early 80s, as depicted in the film.” Their last performance Spider Man: No Coming Home, drew huge crowds to the renovated Franklin Park, with treats provided by Whole Foods and DowntownDC BID. Arrive early to avoid everything Warriors-like the action while finding a vantage point and enjoying the guest DJ whorocdaspot, visiting from Philadelphia, responsible for setting the mood for the evening. Then, when night falls, prepare the popcorn and enjoy what the big Pauline Kael of the New Yorker described as “a nocturnal, psychedelic brilliance for all Baroque film”. DJ Whorocdaspot begins filming at 7:30 p.m. on July 12 at Franklin Park, 1332 I St. NW. shaolinjazz.com. Free. —Colleen Kennedy