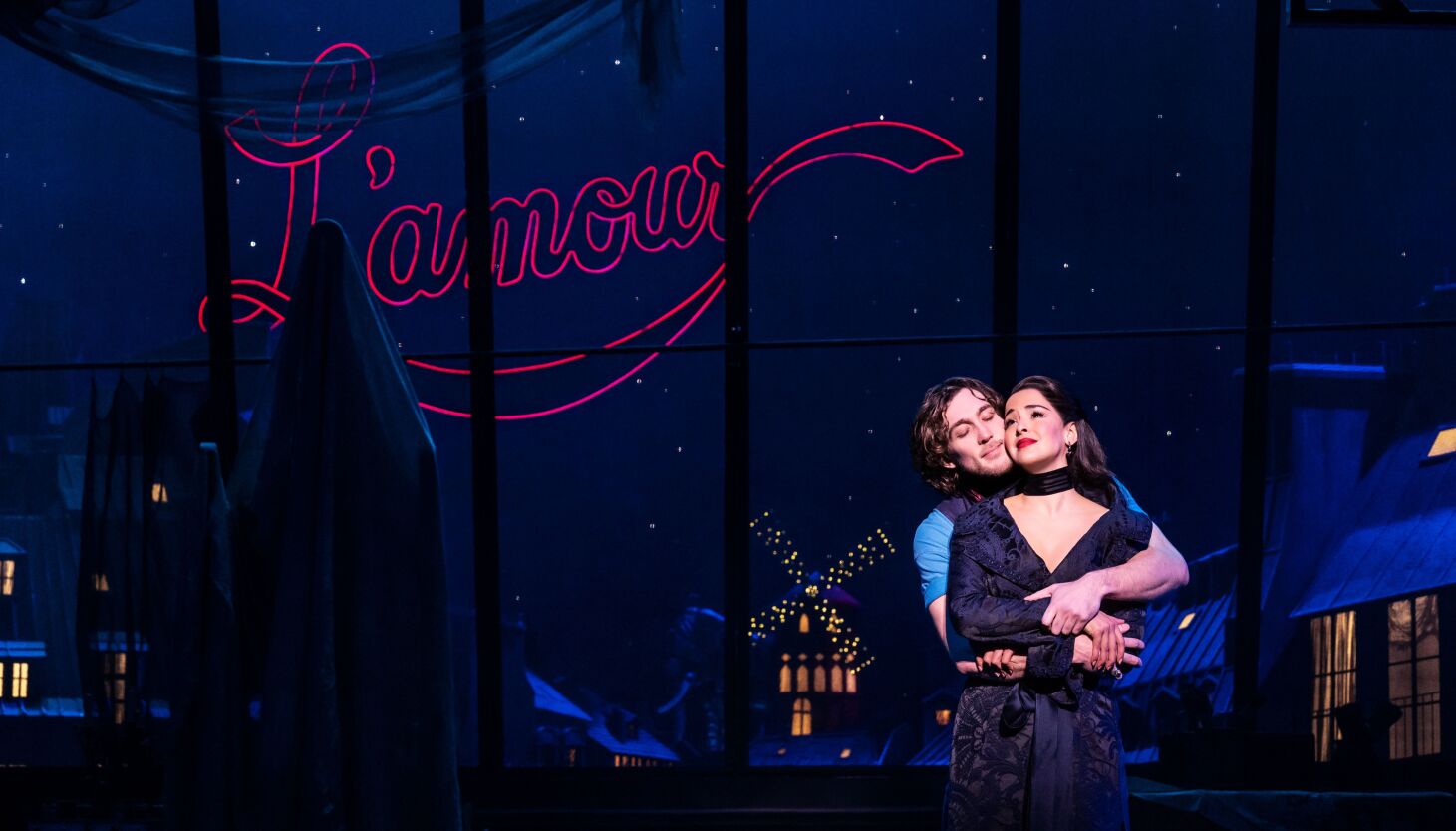 As a musical theater setting, the iconic Moulin Rouge nightclub in Paris is a natural. Baz Luhrmann knew this when he shot his tragic and surreal 2001 film, Indebted by Puccini (starring Nicole Kidman and Ewan McGregor) in the legendary absinthe-soaked palace of Belle Époque decadence. “Moulin Rouge,” the film was a garish, glitzy, glamorous, music-infused extravaganza that burned its way into the collective eyeballs and ear canals of a nation.

The 1899 stage version, “Moulin Rouge!” The Musical,” currently playing at the Nederlander Theater, is based on the film and arrives with a similar vibe. The 10-time Tony Award winner directed by Alex Timbers captures the feverish dreamy beat, lavish excess and irresistible music of its titular inspiration in countless ways.

There are more than 50 songs spanning 160 years built into this jukebox musical, many of them pop hits from the past half-century, hilariously repurposed for a story set long before.

John Logan’s book is more cheesy than Wisconsin and has more shots than a catalog of inspirational restroom posters. It also manages to satirize its flaws via a bit of clever meta-theatre: a play-in-the-play blatantly imbues melodrama and clichés for self-referential laughs.

The plot is as basic as it comes, the characters are about as subtle as the sexual innuendos thrown around: Moulin Rouge star Satine (Courtney Reed) is a “courtesan” with a heart of gold. The Duke of Monroth (David Harris) is a wealthy and infamous arch-villain who insists on buying Satine from club emcee/manager/pimp Harold Zidler (Austin Durant). Without the Duke’s money, the club will close, as will the musical its performers are trying to stage.

Duke or no Duke, penniless composer Christian (Conor Ryan) and Satine fall in love. Thanks to an ingenious mix of Gnarls Barkley (“Crazy”) and Adele (“Rolling in the Deep”), Christian is transformed into one of the most recognizable stereotypes of all: an angry man who mistakes possessiveness for love.

The weight on Satine’s shoulders is oppressive: if she doesn’t do what the duke wants, everyone at the Moulin Rouge will be in “the street”, we are told several times. That includes dancers Santiago (Gabe Martinez) and Nini (Libby Lloyd), a steamy tango duo that brings rage and eroticism to some police-era Sting (“El Tango de Roxane”), among others. Another memorable club regular is André Ward’s Toulouse-Lautrec, who convincingly preaches the Left Bank bohemian credo of “truth, beauty, freedom and love”.

Reed’s Satine deftly captures Whore and Madonna archetypes with numbers including a bubbly cover of Madonna’s “Material Girl” and a soaring rendition of Katy Perry’s “Firework.” She is better in Perry mode; when Reed goes for the raunchy end of the spectrum, she’s still wholesome.

Luckily, “Moulin Rouge” barely needs any plot and character development because the music is so fabulous. It’s a cavalcade of hits from iconic hitmakers – from Offenbach and Regina Spektor to No Doubt, Lady Gaga, Lorde, Bowie and the Commodores – their lyrics and melodies resonate audibly in ingenious new contexts from the start. at the end.

Chief among them is arguably “Lady Marmalade”, who opens the show. Labelle’s 1974 megahit is arguably the number that defines the “Moulin Rouge” more than any other. Under the direction of music director Andrew Graham, it sounds as fresh and bold as when LaBelle gave it to the planet.

Sonya Tayeh’s choreography captures all the powerful, lascivious beauty of the music with precise, explosive movements and an athletic grace that defies anyone to disrespect her brutal audacity.

The set hits one number after another on La Tour Eiffel, so to speak. Britney Spears- (“Toxic”)-meets-Annie Lennox (“Sweet Dreams”) in an all-set mashup about trying to leave an unhealthy relationship. When Ryan and Reed tackle a medley of The Rolling Stones (“Sympathy for the Devil”), a-ha (“Take On Me”), Tina Turner (“What’s Love Got to Do With It”), Whitney Houston ( “I Will Always Love You”) and Joe Cocker/Jennifer Warnes (“Love Lifts Us Up Where We Belong”), to name a few, it’s an entire romantic comedy captured in a single edit. .

The sensibility of more is more is heightened by Derek McLane’s brightly colored set and Catherine Zuber’s costumes. Christian’s artistic ambitions are on display with a jacket splattered with silver paint while Satine’s red and dark green pageant dress evokes the colors and textures of Lautrec’s paintings of dancers.

If you can ignore the story, you’re left with an undeniably entertaining musical evening. It’s a production that brings out the confetti cannons in the very first song and speeds things up from there. This frenetic, hallucinogenic, rock concert-adjacent glitter tsunami aesthetic is nearly impossible to resist.