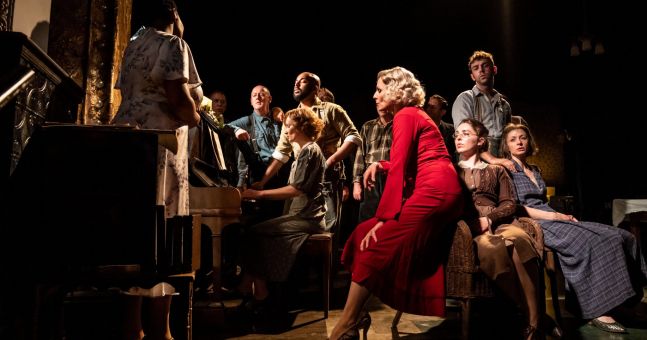 REVIEW: Bob Dylan’s musical Girl from the North Country is moving and uplifting

The hit Broadway show has arrived in Ireland.

Just minutes into Girl from the North Country’s debut, you already know it far exceeds many similar jukebox musicals. Written by Irish playwright Conor McPherson and based on music by Bob Dylan, from the start it transports viewers to a different time and place and for the rest of the show you’d rather be anywhere else.

That time and place is Duluth, Minnesota in 1934 with Girl from the North Country set in a ramshackle guesthouse run by Nick Laine, a husband and father under extreme financial pressure. With Nick in the guesthouse are his ex-wife Elizabeth who lives with dementia, his aspiring writer and alcoholic son Gene, and his adopted African-American daughter Marianne. As the latter is pregnant and the baby’s father is not in the picture, Nick attempts to arrange a marriage between Marianne and an older widower and local cobbler named Mr. Perry.

On top of that, the show transitions between the lives of the Laine family and the diverse group of people who inhabit their guest house that they become entangled with. These include a once-promising boxer who has fallen on hard times, a sleazy bible salesman, and a widow who is waiting for her late husband’s will to be cleared and has an affair with Nick.

Having written plays in the past like The Weir, which was set entirely in a pub in rural Ireland and focused on its storytelling patrons, McPherson knows how to create fully fleshed out characters and environments. It’s also on full screen in Girl from the North Country. Set against the backdrop of the Great Depression, you really get a sense of all of its characters trying to get a better life for themselves, but also their hopes fading after being beaten down by their circumstances and the issues of the time. Each has moments of both great humor and sadness, even a potentially wicked figure like Mr. Perry delivering a monologue in the second act about the horrors of growing old that would break your heart.

When it comes to Bob Dylan, every character in Girl from the North Country feels like they could be the subject of one of his ballads. Plus, choosing Dylan’s best bits to fit the McPherson-penned narrative — some incredibly popular, some lesser-known — the playwright uses the singer-songwriter’s music as a way to get into the heads of his characters. The songs are often used to show how the protagonists feel or what their dreams are, things they find difficult to express in conversations. They are the light in what could be quite a depressing story but it isn’t.

Arguably the strongest element of Girl from the North Country is its musical numbers. Not only does each cast member of the 3Olympia run have a wonderful voice, but the instruments are played by a backing band – and sometimes the cast – on stage, immersing viewers more in the music and sometimes leaving the show less. like a play and more like a peppy concert.

You truly marvel at the actors who, in addition to speaking in Fargo-esque accents, must deliver moving monologues, sing, hit their marks during tightly choreographed musical numbers, and occasionally play instruments. Frances McNamee, who plays Elizabeth, deserves particular praise with her exuberant rendition of “Like a Rolling Stone” arguably being the highlight.

Girl from the North Country is definitely a must for Dylan fans in particular. But honestly, it’s hard to imagine anyone who considers themselves a fan of the music and storytelling wouldn’t be equally swept away by the series thanks to its emotional depth and exhilarating performances.

Girl from the North Country will be presented at 3Olympia until Saturday, July 30.

Full details on timetables and prices can be found here.

2022-07-01
Previous Post: Musical theater group performing a Disney classic
Next Post: ‘Neptune Frost’ is an Afrofuturist musical in a class of its own | Movies | Detroit