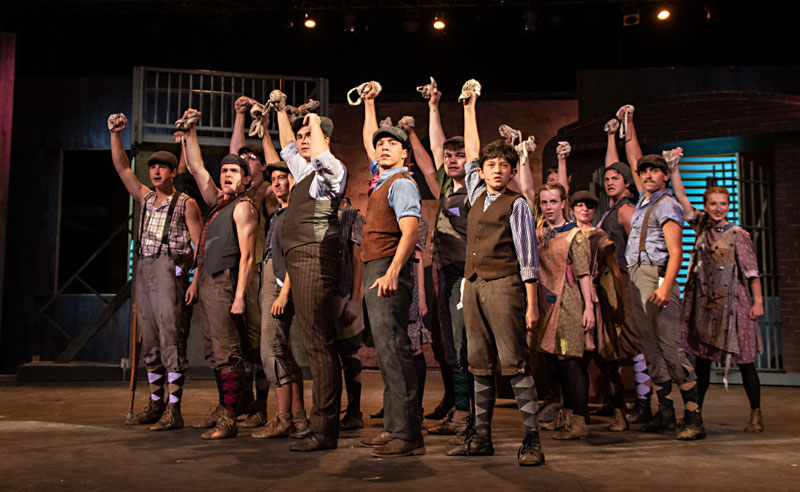 (Front row from left) Morgan Whitley as Davey, LJ Salinas as Jack Kelly and Katie Stumpf as Les, with members of the Newsies ensemble (photo by Taylor Smith)

In the late 19th century, newspaper magnates Joseph Pulitzer and William Randolph Hearst went to great lengths and new depths to outdo themselves in an unforgiving media landscape. They honed the art of headline-grabbing, storytelling, and creating fake news for their New York-based newspapers, believing it was more profitable to entertain and amaze than to inform.

Disney musicals tend to follow the same pattern of success.

Take News, which premiered on Broadway in 2012 and is currently being staged by Zilker Theater Productions. It tells the story of charismatic Jack Kelly (LJ Salinas), the leader of a ragged gang of teenage newsboys and – in this production – reporters, who dreams of a better life away from hardship. city ​​streets. But when publishing titan Pulitzer (Scott Shipman) raises distribution prices at the expense of newspapers, Jack finds a cause to fight for. With the help of his sidekick Davey (Morgan Whitley) and the tenacious Katherine (Abigail Bensman), a renegade reporter from the first act and a love for the second act, they rally the journalists of the five boroughs to strike for what is right.

Based on the actual Newsboys’ Strike of 1899, but unlike other headline musicals like Come from afar, News leave the history lesson to others and replace it with huge production numbers driven by dynamic anthems like “Seize the Day” and “The World Will Know.” So much so that when Governor Teddy Roosevelt (Matt Connely) makes an eleventh-hour entrance, he tells Pulitzer, “Well Joe, don’t just stand there and let those kids sing – endlessly.”

Once you get past the production numbers, with their gripping choreography and dazzling Tony Award-winning score by Alan Menken and Jack Feldman, all that’s left is Harvey Fierstein’s predictable screenplay, cliche-driven dialogue and an abundance of Disneyesque theatrics that earned no awards. Every situation the reporters face is dramatic and dire, every dire situation leads to a speech about brotherhood, and every inspirational speech turns into a catchy song and a long dance break.

Fortunately, after 54 musicals spanning 63 seasons, song and dance are at the heart of Zilker Theater Productions’ outdoor musical endeavors. So the litmus test for this one is whether the talent on stage – under the direction of Joey Banks and with the accompaniment of a fantastic 10-piece orchestra with Beth Everett at the helm – can sell these products with the same charm and moxie as their characters sell theirs.

Yes, they can. And, on opening night, they did so amid a heat wave that scorched the stage and the hillside seats. With temperatures still 93 degrees at intermission, Teresa Carson’s layered period costumes looked great, but were probably no cast friends.

Casting for newsies must have taken place at Costco, because there are more performers than you really need. Yet each of them offers a distinctive and deeply endearing character and exudes youthful energy and enthusiasm. The set fills the double-wide stage with waves of pitch-perfect sound (well-balanced by designer Rodd Simonsen) and Chris Shin’s choreography, which pays meaningful homage to iconic moves – gazelle leaps, ballet shuffling and of in- the athleticism of your face, the provocative poses – found in the original work. When called upon, Dance Captains Evan Carlson and Ella Grace Harper execute the most technically complicated maneuvers with immense grace and precision, and they blend into the wonderful moments of all-for-one/one-for-all synchronization. The set changes are also perfectly orchestrated.

Designer Joshua Denning forgoes the scenic rear projections and centerpiece of metal scaffolding used in Broadway shows and on tour. Instead, three flights of moving stairs against a backdrop of unimpressive faux brick and steel downtown building facades fill the scene, which are made more attractive once the sun goes down and the design of Rachel Atkinson’s spectacular lighting comes into play.

This wonderful production is free to the public, but remember to deposit money in the donation buckets when leaving. There are a ton of journalists who need to be rehydrated.