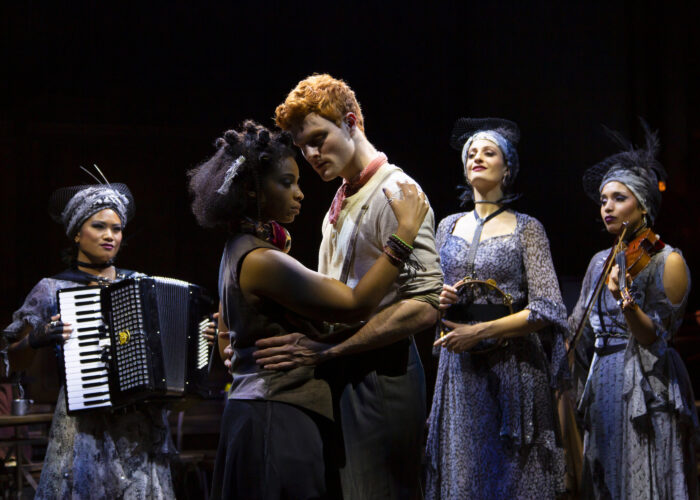 Review: ‘Hadestown’ will make you fall in love with musical theater all over again

The tragic myth inspires a particular terror. You know in your heart what’s going to happen, and that knowledge knots and flows, making the story somehow more suspenseful, not less. Because the hero speaks to an essential part of you, you can’t help but wonder, “What if? and look for an escape. Maybe this time, you think, the hero will sing his song in such a special way that the gods and fates can’t help but sympathize, leave him some slack.

“Hadestown,” the stunning touring musical whose local run kicked off Wednesday, June 8, at BroadwaySF’s Orpheum Theater, raises the bar even higher for its hero song.

Overseen by a wry narrator in Hermes (Levi Kreis), Orpheus (Nicholas Barasch) tries to write a melody so beautiful it can bring spring back in the form of Persephone (Kimberly Marable) and make the prickly, worldly Eurydice (Morgan Siobhan Green) falls in love with him.

When cold and hungry Eurydice negotiates her freedom to enjoy the wealth and comfort of industrial tycoon Hades (Kevyn Morrow), the Song of Orpheus must tear down the walls on her long, arduous path to hell to reclaim her. It must be so powerful and transporting that it will melt Hades’ frozen heart, reminding him of what it is to be young again and in love with his wife Persephone, so that he grants Eurydice permission to leave.

Finally, he must guide Orpheus on his return journey. Hades said that Eurydice can only return if the two can get away with it without Orpheus ever looking at her. This means that his song, hesitantly sung to himself, must keep him company instead of Eurydice and dispel nagging doubts.

If that sounds like impossible tasks for a song, Tony Award-winning “Hadestown,” which has book, music and lyrics by Anaïs Mitchell, nails them.

Orpheus’ melody is as wondrous and hypnotic as a spinning carousel, and Barasch’s high tenor pierces like a sound man isn’t supposed to. A trio of Fates (Belén Moyano, Bex Odorisio and Shea Renne), alternating between ironic taunts, grim warnings and shattering sympathy in their fluttering robes and feathered turbans, harmonize the way the changing winds whistle. Morrow’s menacing bass seems to open cracks in the Earth and let the magma of the underworld spurt out.

The Americana-fueled score, garlanded with blues and jazz flourishes, can chuggle like a freight train or slam and gasp like the pistons and gaskets of Hades’ foundry. In one particularly glorious song, “Chant”, the soaring melody of Orpheus and the doom rhythm of Hades overlap, as the two men are unable to see what their wives need, each blinded by his distorted perception of what his job should be.

Director Rachel Chavkin makes the Orpheum stage the threshold of the gods. In his hands, when Orpheus introduces his song by jumping on a table and moving forward, arms raised, one can’t help but think that he could somehow take flight. When his songs and those of Hades intertwine, his melody transforms the angular, regimented factory work of the choir into a slow, dreamlike ballet (David Neumann did the choreography).

Mitchell’s sparse yet sweeping lyrics fit the Greek mythos perfectly, where a story with featherweight detail punches in the guts. When Eurydice asks Orpheus who will lay their wedding table, he sings, “The trees will sing and bend their branches towards me to lay their fruit around my feet.” Of their fateful meeting, they sing, “I knew you before I met us, and I don’t even know you yet.”

If Orpheus’ fate is to learn what doubt is and let it devour him alive, Hades, increasingly skeptical that Persephone will come to his senses with the changing seasons each year, finds in the song of Orpheus an antidote to the doubt that poisoned him. his mind.

Too often our stories and works suggest that the first blush of youth is the only kind of falling in love. One of the many gifts of “Hadestown” is that an older, estranged, jaded married couple can fall in love with each other again, and such a tale can be just as romantic and heart-pounding as a tale of young lovers, even as it is balanced by the loss of young love.