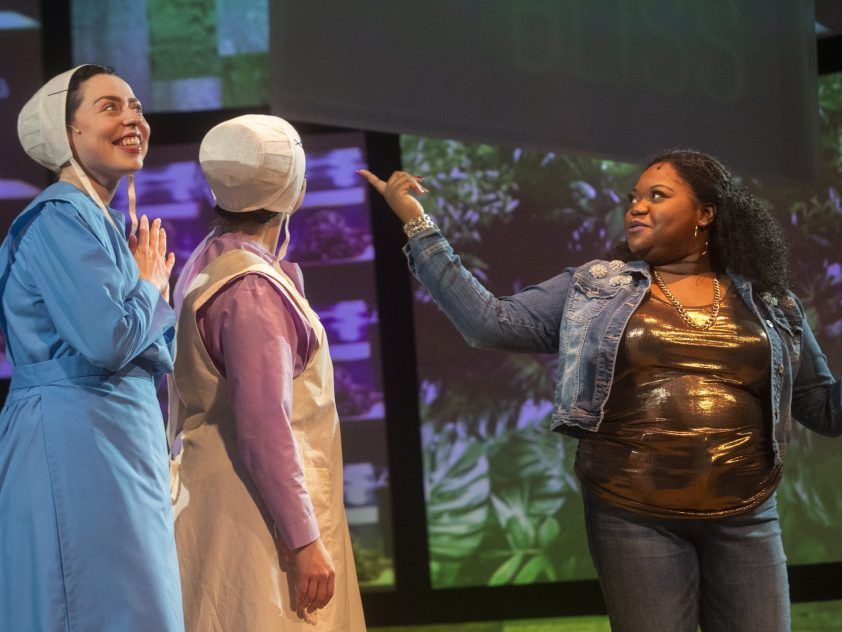 Grow, its world premiere at London’s Grand Theater on Friday, is a celebration of brotherhood, family and community in a unique and inclusive way that will send audiences home with a song on their lips and bounce back in their Steps.

No need to smoke a joint to enjoy this story that also celebrates the virtues of cannabis. It’s pure fun, backed by a wonderful musical score that keeps the story moving and adds to the emotional punch.

There’s a lot to enjoy in this new musical – with book by Sarnia’s Matt Murray, music by Colleen Dauncey and lyrics by Akiva Romer-Segal – if only because there’s so little , if any, that tell such a quintessentially Canadian story in a universally entertaining way.

Director Dennis Garnhum, who helped develop this show for several years and championed it through the Grand’s COMPASS New Plays Development Program, delivers a musical that never loses sight of the story, the clarity allowing the audience to sit and enjoy.

Grow tells the story of Amish twins Hannah (Arinea Hermans) and Ruth (Jenny Weisz), who have reached adulthood and must decide whether to be baptized or leave the community. Hannah chooses to follow the tradition of Rumspringa, where a young person has time to experience the outside world for a year before making up their minds. Her decision shocks the Amish community, who expected her to stay and marry the anxious and determined Samuel (Izad Etemadi).

But Hannah’s father (Sweeney MacArthur) agrees to the Rumspringa, provided she takes the more conservative and reluctant Ruth with her.

The twins head to Toronto where they were supposed to stay with an uncle but arrive to find he has moved on. Instead, they meet an unlucky drug dealer, Skor (Adam Sanders), whose illegal marijuana grow operation struggles to compete with new government-licensed dispensaries due to the poor quality of his drug. .

When Skor discovers Ruth’s genius for growing things, he gives the sisters a place to stay on the condition that Ruth tend to the plants and Hannah keep the house, advising the two to stay away. Alexis (Masini McDermott), who has just opened a legal dispensary nearby and who, Skor worries, might call the police.

Ruth’s green thumb delivers, catapulting the storyline into the 21st century with all its good and bad and an assortment of twin choices that are both practical and personal.

There’s a lot more to love about this show than not.

It’s hard to believe that Hermans and Weisz aren’t real sisters. From their physique to their personalities to their performances, they are believable and their voices charming. They look and behave like sisters, exuding warmth and kindness, naivety and innocence, but with an inner strength that grows throughout the show.

Etemadi is hilarious as Samuel, who is in love with Hannah and her considerable housekeeping skills, but also concerned about growing a beard, something he won’t be able to do until he’s married.

Sanders’ Skor is a wonderfully nuanced character, not a really tough drug dealer, but more of a bright but laid-back, lonely dude who’s just trying to survive and seek his true calling. His singing is excellent.

There are some romances in the story that are delightfully tender, sweet, and believable.

There are also some wonders for the public, starting with McDermott, who plays Alexis, a young but determined businesswoman trying to set up a cannabis store. Her voice is simply sublime.

Another treat – indeed, a surprise and a delight – is Smith, who has starred in several shows at The Grand, including her anti-gender role as Scrooge in A Christmas Carol, Johannah Donnelly in Vigilante and The Bird Lady in Mary Poppins.

Smith gets credit in the program for her bits as the stern Amish woman Miriam and the tough tattooed Susan, but not for a policeman who arrives in a scene that the talented Smith steals and the audience enjoys with applause.

The songs help drive the story and provide the emotional punch that makes this show memorable. From the opening number, Hand in Hand, to the closing Make It Home, there isn’t a faint melody in the mix as the lyrics strike a chord with you or make you laugh. Two songs that I particularly enjoyed were The One I Choose, sung by Skor and Ruth, and Wherever You Go, I Will Go, conducted by Hannah and Ruth with the backing of the entire ensemble.

Dauncey’s vocal arrangements leave nothing to be desired. They are clean and clear, the music performed perfectly by the orchestra led by Andrew Petrasiunas with beautiful arrangements and orchestrations by music supervisor Wayne Gwillim.

The set, designed by Bretta Gerecke, is brilliant, serving first as an Amish kitchen and then as a Toronto streetscape, with the landscape projected onto panels above a tilted or slightly raised stage.

There were times in both acts where the show, which lasts around two hours and 20 minutes, seemed to sag a bit, suggesting it might need a little crunch, but certainly not in a way. important.

Like a breath of fresh spring air, Grow has finally arrived after being postponed from 2020 due to the pandemic and was well worth the wait.

IF YOU ARE GOING TO

What: world premiere of Grow, a musical, presented by the Grand Théâtre, directed by Dennis Garnhum

Sign up to receive a curated collection of links and highlights from our award-winning news coverage, in-depth analysis and unrivaled weekday noon investigative features.

Thank you for your registration!

A welcome email is on its way. If you don’t see it, please check your spam folder.

The next issue of LFP Noon News Roundup will soon be in your inbox.

We encountered a problem during your registration. Try Again

2022-04-23
Previous Post: Pacific Symphony Announces Series of Family Musical Matinees
Next Post: We Will Rock You all over again as musical set to arrive at Wolverhampton Grand