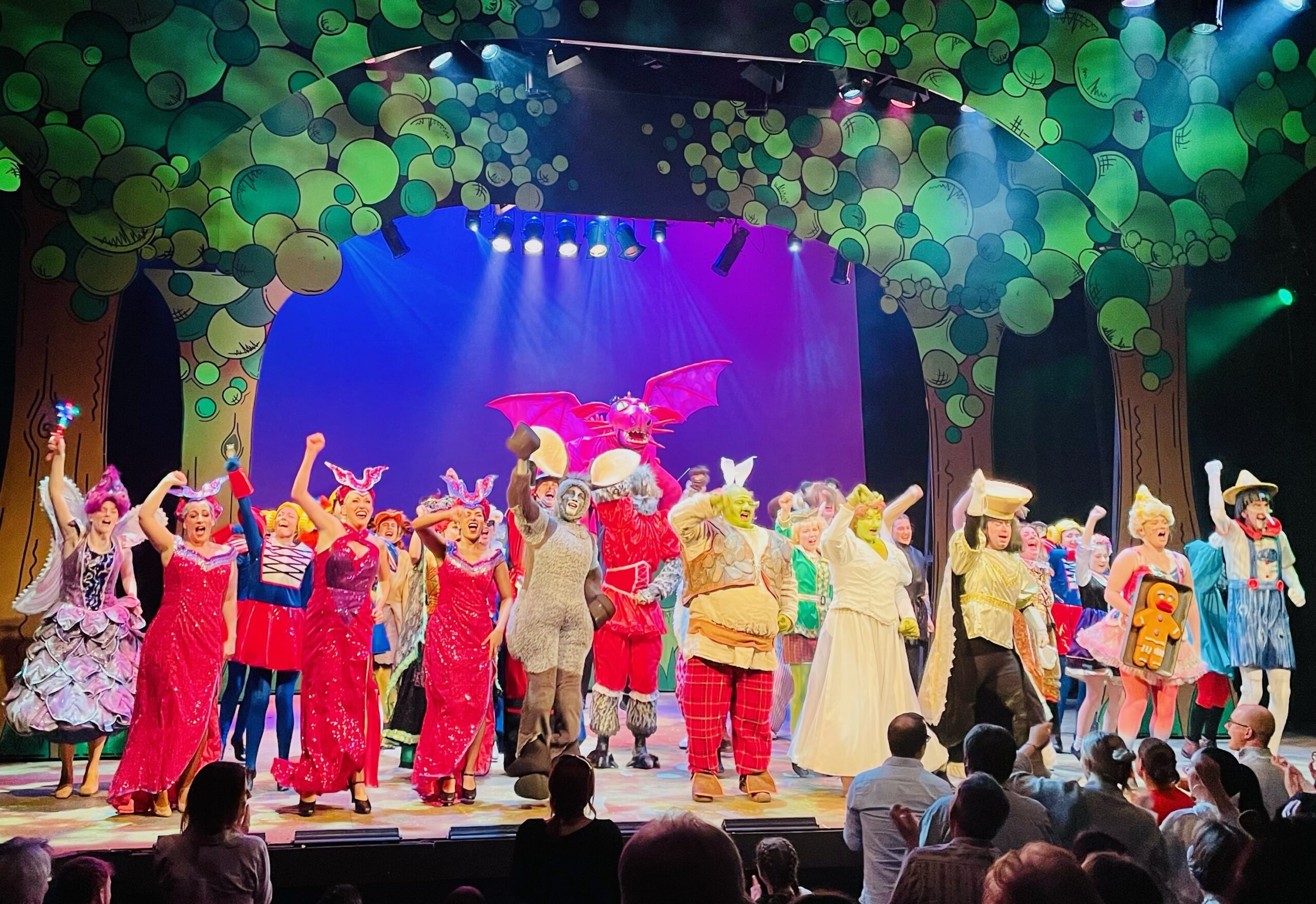 Shrek The Musical is a real uplifting, positive theatrical experience that’s so uplifting

Upon arriving, local councilor Emily Blyth, spontaneously jingled the ivories beautifully in the VIP lounge, where we were warmly welcomed with drinks.

A great chat with Marketing Manager, Margaretha Welsford and one of the Trustees Mike O’Donovan gave a real insight into all the amazing work produced by South Hill Park, in all facets of arts and performance.

There is something for everyone to have a creative outlet to see or do each week.

This production was a true community event, produced by their professional creative team, South Hill Park Presents. It was formerly known as the Wilde Theater Company.

Their shows offer local artists the opportunity to showcase their skills in high-quality theater and musical performances.

It’s great that it’s also a sold-out production for them and richly deserved too.

Shrek The Musical is a true feel-good theatrical experience, positive and so uplifting, leaving the theater with a smile on your face and feeling warm in your swamp…I mean heart.

After watching the original West End production many moons ago, this company has done it justice.

At the start of the show, the Story Of My Life musical number was outstanding overall.

Every number they participated in was smooth and on point, with impressive choreography by Charlotte Steele.

The Things Are Looking Up number also drew applause and cheers from the audience.

Pinocchio, played by Sam Gillet, with his growing nose, had funny lines and brought lots of laughs from the crowd. He was my guest’s favorite and that’s not a lie.

Brad Clapson was Shrek, after several years as a South Hill Park pantomime. He has a very strong performance technique, with lots of audience cheers, whistles, applause and shouts.

His well-formed characterization and true movie-style voice were impressive. His great onstage chemistry with Poppy Ridell’s Donkey also helped, making him a joy to watch.

As for Poppy: wow, what a talent. Her energy was contagious and a sensational singing voice to boot. The number with the three blind mice was an outstanding performance. Definitely the People’s Choice Award and mine too. Her costume, complete with clogs, was great too.

Young Princess Fiona, played by Tilly Mills, had a performance style above her years. A well-posed voice and timbre.

The three of them singing at the end perfectly harmoniously matched.

Georgie Banks was superbly cast and dominated the stage throughout.

Ashleigh Wells as Lord Farquaad had a fabulous entrance and with perfect comedy timing.

Another firm crowd favorite that did not disappoint. Very funny and well acted from start to finish.

The guards who witnessed his first scenes had full concentration and worked together beautifully.

Effective puppets are used for the dragon, with all three performers sharing the character’s voice and song with aplomb.

The “old knights” skeleton set was also a fun addition.

A round of applause from the audience started off act two in very good spirit, leading to a lovely rat tap ensemble number with a full costume surprise of Bucks Fizz by Princess Fiona. Watching her fall in love with Shrek after a fest of flatulent burps was hilarious, but beautifully acted.

A huge shout out to all the cast and crew of a fabulous production who got a standing ovation and everyone danced on their feet.

A night of pure theatre, at its best.

Skillfully led by Mark Hooper, the pace and pacing were flawless. The characters have been developed for maximum effect, with some very fun ideas included as well. The skateboard horse backing off with a beep tickled me nicely.

Tim Crumper’s musical direction was solid, with harmonies explored and perfected in every number.

My only criticism, if I had to choose one (which was difficult on this occasion) would be that a live orchestra would have been perfect. To be fair, not every artist who has to work on backing tracks is an easy thing to do. There is no room for error or mistakes and I didn’t notice any.

It was superb lighting design by Michael Brenkley and captivating set design by Victoria Spearing.

Couldn’t fault the sound design and the operators either, no hiccups from Phil Hoegger and Darren Gould.

The costumes, complete with matching wigs and accessories, were expertly crafted by Naomi Gibbs, a veritable riot of color. Not sure if they were hired or created specifically for the performance, either way they worked like a treat.

South Hill Park hosts community productions three times a year in spring, summer and fall. Cast members are often between the ages of eight and 80 – no one is too young or too old as long as they come along with a lot of enthusiasm.

If you would like to get involved with the performance at South Hill Park, or if you would like to join our backstage team or show bands, contact its technical manager, Gareth Evans, via his website, https://www.southhillpark.org.uk/about/contact/

To sum up, the public loved it and so did I. Well done South Hill Park Presents can’t wait to see the next one.

2022-04-15
Previous Post: Titanic – The Musical arrives on stage at the Kings Theatre, marking the 110th anniversary of its sinking
Next Post: Jagbir Dahiya To Release Musical Melodies Under “Asian Records”