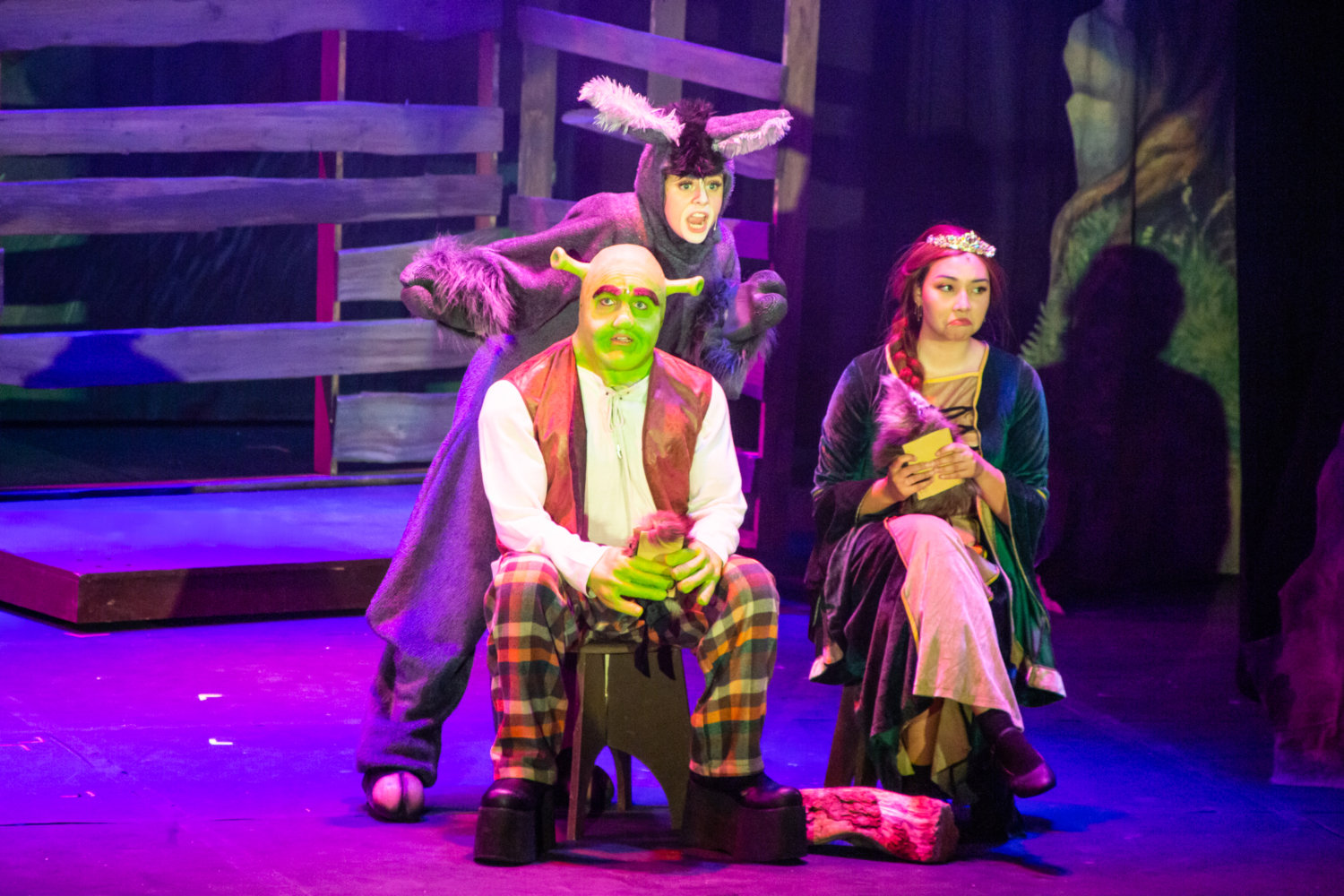 South Pasadena High School Drama made a dramatic return to the stage last weekend after a three-year absence due to the pandemic. The atmosphere of the three performances at the new Anderson Auditorium on the SPHS campus was nothing short of electric. The enthusiastic and nearly sold-out audience was treated to a triumphant celebration of the highest caliber – and the joyous noise and hilarity that followed proved that director Nick Hoffa’s choice was once again inspired. From the moment conductor Howard Crawford launched the orchestra to the final salutes and awards given on Saturday, it was a warm and boisterous party for all.

Based on the Dreamworks animated feature, “Shrek The Musical”, with a score by Jeanine Tesori and book and lyrics by David Lindsay-Abaire, is a fairytale adventure about a lonely, grumpy, green ogre whose swamp is overrun with all sorts of fairy tale characters who have been banished from the kingdom of Dulac by a petty villain, Lord Farquaad. Shrek is tasked with rescuing Princess Fiona, with the help of her annoying but loyal new friend, Donkey, from her dragon-guarded tower in order to be Farquaad’s bride. The musical gives more history than the movie with songs about Fiona’s childhood locked in the tower, Farquaad’s daddy issues and Shrek’s sad childhood story.

It’s a wacky and wonderful world where fairy tales collide hysterically. But there’s real heart to it as we find that this ogre actually has a song in his heart and a whole lot of love to give. Levi Srebalus is the big sled, Shrek, and even through thick, green prosthetics, a skull cap, and a big suit, his sweetness and charm shines through. It’s amazing to watch Srebalus’ evolution on the stages of South Pasadena, from youth theater roles at YST, to every show at SPHS, to singing his heart out in this lead role. He breaks your heart when he sings the sweet and awkward “When Words Fail”. Transcending the typical princess role, the incandescent Quinn Manzo plays a feisty and funny Fiona. It’s easy to be #TeamFiona from the get-go with Manzo’s crystal-clear voice and standout charisma. She and Srebalus make an enchanting couple to follow on this journey of love and self-discovery.

There’s a beautiful trio called “I Know It’s Today” that showcases Manzo’s exquisite harmonies with Iris Berrera and Alyssandra Lachica as young and teenage Fiona respectively. It’s a big number that sets up Fiona’s story and how long she’s been waiting for her savior.

Ava Page as Donkey, who has many of the best jokes, brings the knee-pounding laughs. But in Page’s able hands, the jokes never bend, proving to be incredibly endearing – we root for the friendship that develops between Shrek and Donkey. Lulu Talesnick has the unique task of playing her full part on her knees as the height challenged Farquaad. It’s an absurdly silly sight gag, and one that Talesnick and the cast took full advantage of with innovative ways to carry her, ride her, and dance on the backs of her guards. She’s clearly having fun singing Farquaad’s country ode “The Ballad of Farquaad.”

James Jontz and his production team do a magnificent job of creating the fairy tale land of Shrek’s swamp and cabin with a castle tower, a bridge and the kingdom of Dulac. Hats off to student producers Shelby Collins, Nathan Comenares, Isabella Cruz, Leyton Ramos-Platt, Maya Flores, Isabella Galan, Michael Olsen and Zoe Williams, who handled the costumes, props and makeup design – all of whom were exceptional .

The entire cast with the audience has a full ball rolling with such splashy numbers as the infectious Manzo-led “Morning Person,” the “Freak Flag” anthem where all the misfits sing along and are proud of how what makes them makes them different makes them special. . Courtney Cheyne’s inventive, bouncy choreography hit the mark as something straddling the human and fairy tale worlds and Wylder Reinman’s led vocals sounded bold and flawless. Everyone loved the burping and farting contest in the middle of “I Think I Got You Beat,” especially the kids in attendance! And it all ends with a catchy rendition of “I’m a Believer” with the audience dancing and clapping. What show! Kudos to Mr. Hoffa and all the fearless faculty, cast, and crew who gave South Pasadena something to believe in. Welcome Back!