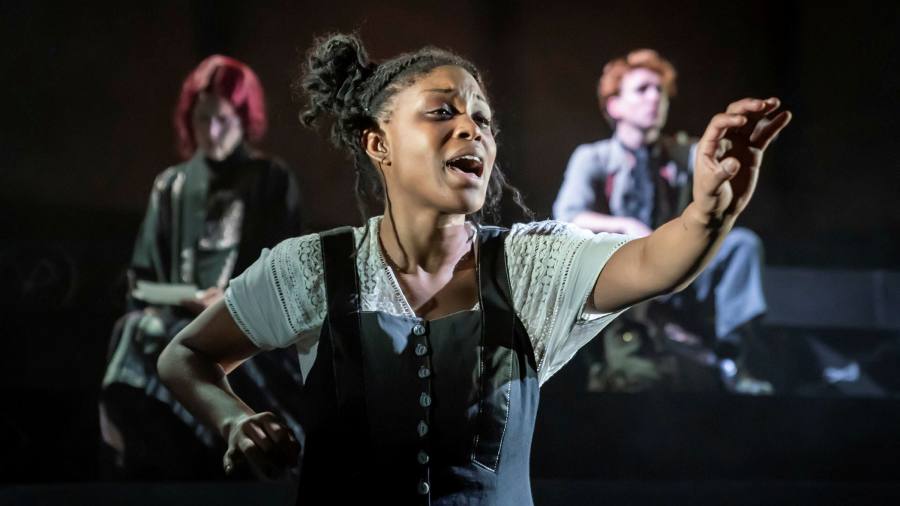 They parade on stage and stare at us, as if assembled for one of those dusty photographs of generations long since disappeared hanging in the corridors of the school, their faces blazing with hope, challenge, apprehension. Then they talk.

The students of the inauguration of Frank Wedekind Spring awakening (written in 1891) took the stage by storm in 1906, shocking audiences with its frankness, rebellion, and desire. Several generations later, they’re back in Duncan Sheik and Steven Sater’s rock music version of 2006, and what’s striking about Rupert Goold’s terrific new staging is how these characters still feel. fresh and true. We may have moved on from the repressive German society of Wedekind in the 19th century, but many of the play’s themes still seem too contemporary – although today’s teens would add climate change to their concerns. They come blazing through the limelight in the hands of the superb young cast of Goold.

We meet Moritz, a hesitant, troubled, dreamy soul who fails to keep pace at school and whose awkward pleas for help are dismissed by achievement-obsessed teachers and a father ashamed of his struggling son. . He has an ally in Melchior, a brilliant scholar and a rebel, whose frankness leads to a ruinous clash with authority. And then there’s Wendla, sweet, honest and curious, kept in sexual ignorance by her mother with dire consequences.

All three are played out with great integrity and clarity, the performances precisely capturing the overwhelming enormity of the pain and desire of the young characters. Amara Okereke brings a nice blend of openness and frustration to Wendla and a keen understanding that innocence doesn’t equal ignorance. His fate is therefore all the more heartbreaking. She pairs beautifully with Laurie Kynaston’s smart but brash Melchior, who draws heat with her refusal to comply or be quiet. Their duet “The Word of Your Body” is delicate and almost painful, both fingers touching as they slide onto their backs on the steep staircase of a Miriam Buether set, as if melted by their awakened feelings; their antics are tender and awkward. Saddest of all is Stuart Thompson’s Moritz: Thompson brings painful sweetness and hesitation to the role of a misfit that tragically goes unnoticed.

Around this hopeful and crushed trio radiate their classmates, each strongly drawn. Wedekind’s daring never ceases to strike you: this is Hänschen (Nathan Armarkwei-Laryea), who is gay; this is Martha (Bella Maclean), who is being abused by her father. Equally striking are the restless intelligence, restlessness and energy of youth. Lynne Page’s expressive choreography takes the actors up and down and around the set steps. She had them locked up to the shoulders, in single file, in a Latin class; burst onto the scene in the raging rock anthem “Totally Fucked”; and silently passing a single white rose in an undulating pattern across the stage at a funeral.

Catherine Cusack and Mark Lockyer embody all adults like caricatures: alternately bullying, bohemian or buttoned up, but always distant. Finn Ross’s video work transforms the stage space in an instant, shaping the mood and immersing us in the world of adolescents; Nicky Gillibrand’s costumes combine the old and the new. Written in the 19th century, cropped in 2006, the show now appears to speak for the politically astute teens of today, articulating the future of their planet and plagued by a pandemic. Opening at a time of acute anxiety for the theater industry, with uncertainty looming and countless shows shutting down due to Covid, this excellent revival looks like a beacon of hope and determination.

We are back with the disruptive nature of desire in Habeas corpus, Alan Bennett’s 1973 farce, taken over at the Menier chocolate factory. Only this time the results are not so happy. Bennett’s comedy takes us back to the 1970s and a doctor’s office where mistakes and misadventures expose a whirlpool of lust, jealousy, and resentment. Written by a master of subtle comic revelation and directed by brilliantly funny screenwriter and director Patrick Marber, this self-proclaimed “dirty farce of a less enlightened age” promises a treat. On stage, however, it turns out to be a poorly dated mistake.

We are in the Hove Surgery of Dr Wicksteed (played with a weary self-knowledge of the world by Jasper Britton), a general practitioner whose appetite for female conquest has not waned with age. He is accompanied by his long-suffering wife (Catherine Russell), his inconsolable single sister, Constance (Kirsty Besterman) and his future fiancé, the lustful cleric Canon Throbbing (Matthew Cottle) – a man for whom nominative determinism. has been invented . The effortless arrival of Lady Rumpers (Caroline Langrishe) and her desirable daughter Felicity (Katie Bernstein) thrills everyone. Before long, Wicksteed and his hypochondriac son (Thomas Josling) are both after Felicity, they all chase each other around the coffin which is in the center of the stage like a memory mori and many people, of course, get groped or lose their pants.

There is an awful lot (and I mean an awful lot) of boob jokes, including the sad story of Constance’s attempts to enhance her flat chest with a fake breast and the multiple misunderstandings that ensue when the company’s techie rental arrives to verify the property. Other sinister racing gags include the ugliness of the son, Sir Percy Shorter’s stature and a suicidal patient who shows up and tries to kill himself.

It’s a farce about being a farce, about the mechanism of comedy, chaired by our guide, the funny and ubiquitous charlady (Ria Jones), and strewn with scholarly asides for the audience. But it’s still oddly no fun, even as a self-parody, and though Bennett underlies the shenanigans with artful philosophical observations about the loneliness and the gnawing awareness of mortality that drives the indiscretions. To be blunt, that sounds like a waste of a big cast and a dazzling director.

A bulletin from Chile arrives in A fight against. . . (Una Lucha Contra …), a sharp burst of a play by Pablo Manzi, written before the country’s recent seismic elections, but which perhaps captures something of the spirit that led to it.

In five brief and unrelated scenes, scattered both in place and in time (an apartment in Chile; in front of a nightclub; on the border with Peru; in the United States; in Mexico in the 19th century), individuals reach a moment of realization and are confronted by their own loneliness. It’s a piece that fights against isolation, individualism, borders and community, with the need to belong and what that means. Time and time again, in different contexts, people find themselves on a sort of threshold between belonging and loneliness, as Manzi questions the disturbing role of violence in uniting people.

In texture, the play (translated by William Gregory) resembles a Caryl Churchill play, with its teasing obliquity and dark, surprising lines of humor. A young couple (Joseph Balderrama and Jimena Larraguivel) lead an urgent conversation about a threatening incident at a college seminary in a tense whisper because of their sleeping baby; a self-defense team (Balderrama, Eduardo Arcelus and Sebastian Orozco) disperse like a group of children called home for tea; a pair of border guards (Orozco and Pepa Duarte) try to order chocolate on their radio.

Director Sam Pritchard keeps the scenes subtly distinct and elusive, and his fine, versatile cast moves through storylines and centuries, each leading us to get caught up in something they struggle to express.