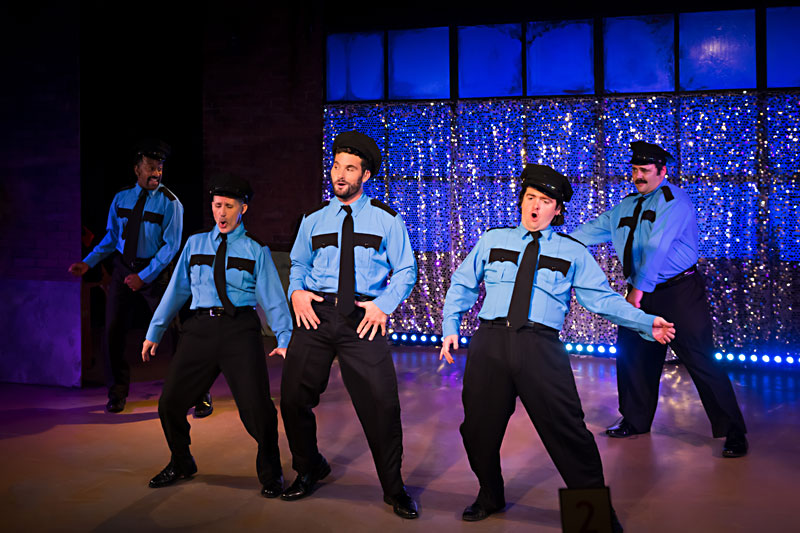 Professional dancers with dollar bills in their thongs will tell you that stripping is all about the teasing – the buildup of sexual tension and anticipation that leads to the long-awaited, oh-so-brief, dramatic reveal. It’s a kind of delayed gratification.

But in The full Monty – an Americanized musical adaptation of the 1997 British independent film – the strippers are six average, out-of-shape, blue-collar workers who can’t dance. And so, amid the first attempts at banging and grinding, the sexual tension is effectively exchanged for comic relief and the anticipation quickly turns into morbid curiosity. With a screenplay by Terrence McNally that features abundantly clever dialogue and a score by David Yazbek that beautifully captures moments and relationships without the added burden of pushing the script forward, this frothy musical is both fun and heartfelt.

It revolves around Buffalo, NY, lifers Jerry (Patrick Darab Hartigan), Dave (Stephen Mercantel), Harold (Huck Huckaby), Malcolm (Nathan Daniel Ford), Ethan (Leslie R. Hethcox), and “Horse” ( Quincy Kuykendall), who struggle with the weight of emasculation after being laid off at the local steel mill. Desperate times call for desperate measures, especially in musicals, so when Jerry notices the money spent on touring hard-bodied Chippendale dancers by the women of the town, he hatches a plan to put on a strip show. amateur tease at six for a night. -only performance. Their attempt to save face by exposing everything from neck to toe is met with adversity and ridicule, making this absurd journey damn heroic.

And yet, gratification is a bit hard to find in this TexARTS production, starting with the disappointing opening. The five-piece orchestra (music director Susan Finnigan, Austin Kimble, Corey Finnigan, Kris Rogers and Chris Gordon) plays very well, but without the richness that a few horns would bring and that this music demands. As was the case with the lite version of this theater Sweeney Todd Last February, carving instruments was a good financial decision but not a great creative choice.

Hartigan’s rigid and constrained opening night performance also impacts gratification. The script features a petty hustler, a regretful divorcee, and young Nathan’s (James Schermerhorn) adored father, but the actor’s performance lacks conviction on all these fronts. It never musters the subtle humor that turns “Big-Ass Rock” – a hilarious song that lightens the mood surrounding Malcolm’s failed suicide by asking his buddies to offer to help him with the task – into a pitfall and keeps it from becoming horribly non-PC. While Hartigan isn’t the only guy on stage to find the high notes elusive, it mostly shows in the many songs he’s assigned.

The actors playing Jerry’s Buddies keep the show afloat, and then some with clear characterizations, perfect comedic timing, and a genuine sense of camaraderie. And, under director Kasey RT Graham and choreographer Ian Liberto, all six are miraculously transformed into believable ecdysiasts by the final number, “Let It Go.”

Although the guys have the most time on stage, songs to sing, and smart business to execute, this production’s collection of wives (Mia Carter, Rachel Pallante, Michelle Cheney) and city girls (Megan Castleberry, Rebekah Freeland , Courtlin Parisher) refuses to be subjugated. They start the show with a particularly brassy and energetic “It’s a Woman’s World” and don’t let go. When given the opportunity to take center stage with a solo or duet, they make the most of it.

Cheney is lovely in the comedic, calypso-beat “Life With Harold,” where her low-key, privileged persona goes wild while recounting the wonderful things her well-to-do husband gives her. She and a wonderful Pallante, who plays Dave’s wife, deliver a terrific, heartbreaking reprisal of “You Rule My World,” where they reassure their husbands of the depth of their love. Mary Agen Cox, as bawdy veteran nightclub piano accompanist Jeanette, is given one of the best comedic tunes in the musical theater canon – “Jeanette’s Showbiz Number” – which she nails.

The production values ​​are suitably simple in this staging. The performance space is surrounded by a fixed ensemble designed by Donna Coughlin that consists of red brick warehouse walls and Rust Belt industrial windows. Every Buffalo location, established by a piece of furniture or two, includes this reminder of the city’s economic struggles.

Lighting and costume designers Lucinda Culver and Christopher Arthur also do a great job, which is especially evident during the titular moment at the end of the show, where their collective craftsmanship may be the only thing stopping this theater from being fined for indecent exposure. Which would undoubtedly result in sold-out houses — and the aforementioned delayed gratification.

The Full Monty from TexARTS Theater

A version of this article appeared in print on July 22, 2022 with the title: Review: TexARTS’ The full Monty