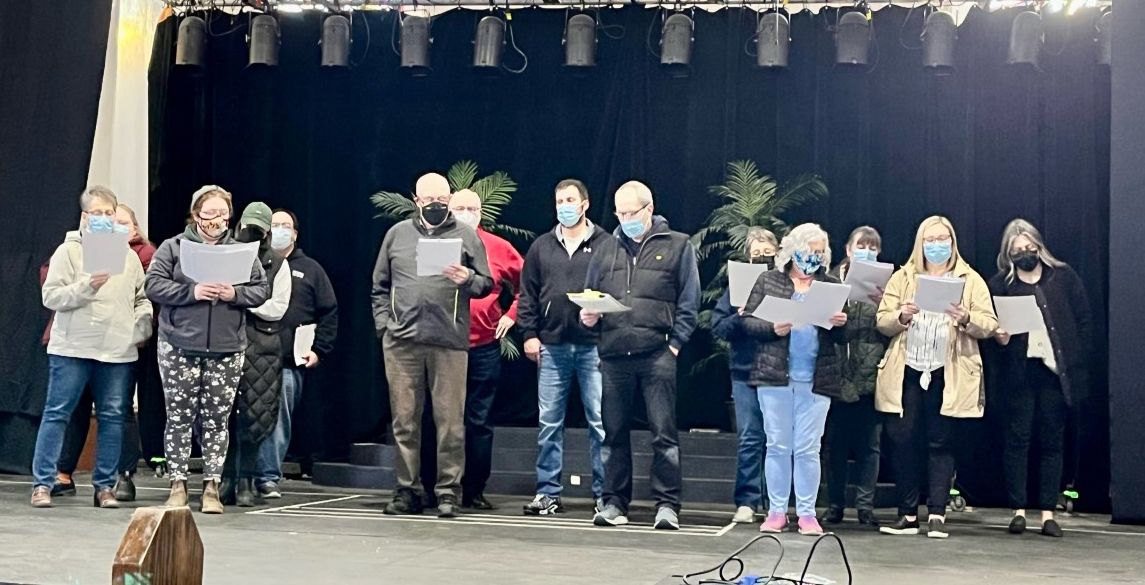 The ‘Kingsbridge Chronicles’ continue with a fourth musical

“A Line in the Dirt” is the fourth musical from the Kingsbridge Chronicles.

Written by Warren Robinson and Mary Murdoch, featuring local actors and real events, this innovative musical is based on real events in Ontario in the early 1990s.

Farmers’ struggle in the face of rising costs created the crisis where local farmers drew the ‘line in the dirt’, resulting in marches, protests and a province-wide traffic blockage on provincial highways just outside north of Kingsbridge. People were desperate, times were extremely difficult and steps had to be taken to get the attention of the provincial and federal governments.

Line in the Dirt depicts the power of community in the face of adversity. Captivating characters, cartoon scenes, music and dancing will captivate audiences as they are transported to the year when “Summer Never Came”.

The three previous musicals at the Kingsbridge Center have attracted between 1,000 and 1,200 people each year, 30% of whom travel more than 50km to see the show.

“The town of Kingsbridge has nine houses, a signpost and a big red church,” she explained. “When St. Joseph’s Church closed in 2012, it isolated a vibrant rural community. The nearest public building is more than 15 km away; there was no venue for public gatherings, service group meetings, or rental options.

The community of St. Joseph’s Kingsbridge was formed with the aim of preserving a historic building, while restoring a meeting place for the region. By June 2015, Kingsbridge had been granted charitable status and full ownership of the building. Thanks to private donations of $180,000, repairs to the old church (renamed Kingsbridge Centre) allowed the upstairs to open in August 2015. The ground floor was completely emptied due to damage by moisture, renovated in stages according to authorized funds and open to the public. use August 2019.

The Kingsbridge Center is now a multi-purpose facility run entirely by volunteers. The floor is used for rentals, a concert series, community gatherings and a gallery for local artists. Kingsbridge’s successful business plan calls for cultural activities on the building’s floor to generate revenue to cover the building’s operating costs, providing an affordable facility for community use.

The goal since 2020 has been to improve the accessibility of Kingsbridge Center using recommendations from the Huron County Accessibility Advisory Committee’s audit of Kingsbridge Centre. The audit generated a full report of suggested improvements/renovations. From this report, a plan for improvements was drawn up, including an elevator, carpet replacement, replacement of exterior/interior ramps, electric door opener with alarm, improved parking/deposit area, as well as a long list of smaller items such as paint (for contrast) signage, railings, etc. The total accessibility project cost (excluding front entrances) in 2019 was $166,021.

2020 has been deemed the “Year of Accessibility” by the Board of Directors, and this designation continues through 2022. The interior of the building has been largely repaired, including the installation of a new elevator, carpet replacement, signage, etc.

On opening night, the cast and crew expect the chosen ones to be in attendance, followed by a reception.

The second weekend they will feature local producers in line with the show; a market called Agriculture: yesterday, today and tomorrow. This event will allow producers to display their products and offer local dishes for purchase, including craft beer and wine.

“Due to its agricultural content, Kingsbridge would like to use Line in the Dirt as an opportunity to showcase all that agriculture has to offer,” said Jennifer Miltenburg.

“It is through the cooperation of friends, neighbors and businesses that we will maintain the strength and vitality of rural Ontario,” said Miltenburg. “We are proud to be farmers and we hope you will help us share this pride with our rural and urban visitors.

Line in the Dirt – Kingsbridge the Musical IV runs June 3, 4, 10 and 11 at 8 p.m. with matinees on June 5 and 12 at 2 p.m. Tickets are $20 for adults, $10 for students, $5 for ages 12 and under. Tickets are available at the door and refreshments are available. Doors will open one hour before the event. Kingsbridge Center is now wheelchair accessible.