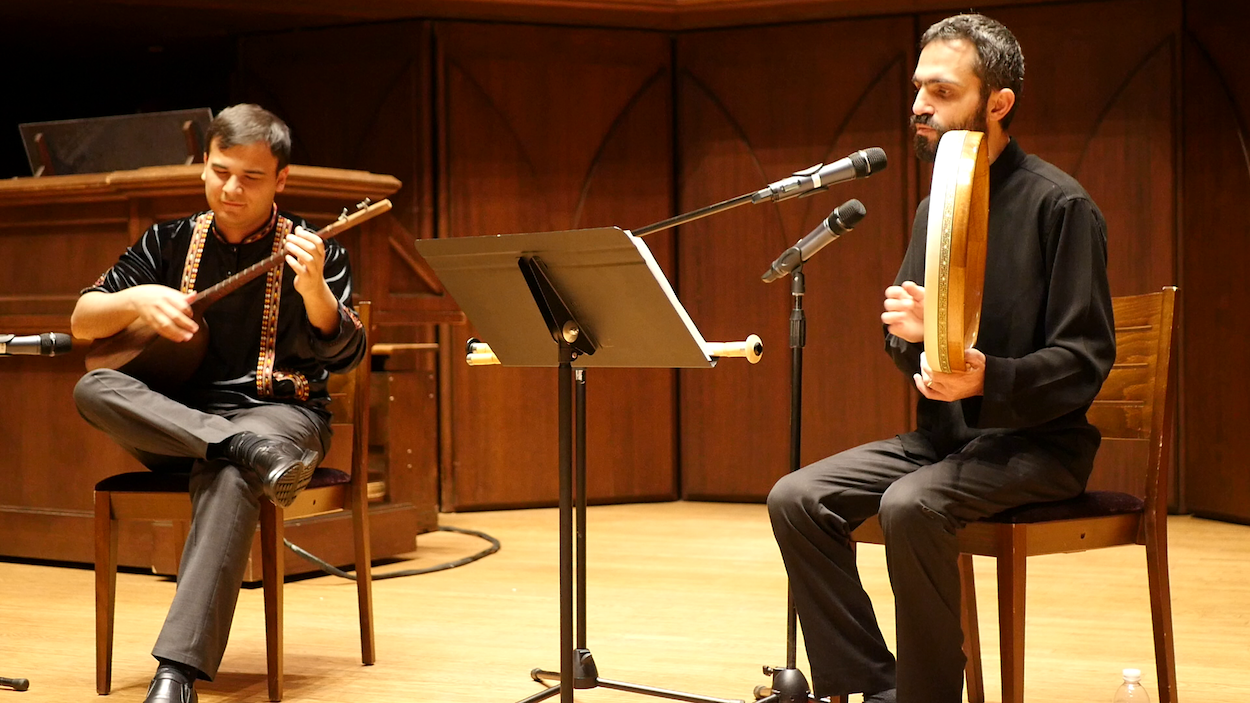 Graduate Music Students Ridvan Aydinli MA ’22 and Mohammad Geldi Geldi Nejad MA ’23 filled the Memorial Chapel with music from Turkey and Turkmenistan late Monday evening April 25th. worlds of Turkey and Turkmenistan. The first half of the recital focused on the Turkish musical tradition of Aydinli, and Geldi Nejad joined him in the second half to explore the synthesis of their two cultures.

Originally from Turkey, Aydinli is known internationally both as an accomplished performer and as a researcher of Ottoman/Turkish classical music. The recital began with this expertise on full display as Aydinli performed a rhythmically free opening improvisation on his main instrument: the Turkish ney. The ney can be considered an ancient recorder hybrid instrument made primarily from a reed. Each ney has an open hole near the head of the instrument where the performer blows on a sharp edge to activate their sound, while keyholes can be used to alter the resulting pitch much further down the body of the ney .

The materiality and the body of the instrument emerged fully in the opening improvisation. An airy brilliance from the ney filled the benches as Aydinli played around the opening melodic mode, creating luminous musical patterns that evoked the image of birds soaring in the sky. The deep turns that emerged throughout the second half of the improvisation heightened the atmosphere. Every turn brought an immense sense of weight and movement to Aydinli’s musical phrases and captured the full attention of the audience.

After the trance overture, the expert ney player performed a long piece which comprised the rest of the first half of the recital. It started with a much darker musical prelude that provided a dark, contemplative mood. Now in a new makam (Turkish musical mode), Aydinli’s playing ebbed and flowed from the full range of the ney and overwhelmed the audience. The airy tone of the ney now evoked a deep intensity that contrasted sharply with the brilliance of the previous piece, spreading a tone of meditative reverence throughout the chapel.

Towards the end of this prelude, Aydinli seamlessly shifts to a composed work that uses usul (rhythmic cycles) that deviate considerably from the four-beat groupings found in most Western popular music. The first usul of the evening, entitled Dev-i kebir, focused on cycles of 28 beats and represented this style. Emerging from its dark tone, Aydinli’s ney became much more rhythmically accented to further emphasize the shape of each musical line. A variety of winding, twisting melodic phrases filled the chapel with an energy that was both meditative and captivating.

Once the piece was over, Geldi Nejad joined Aydinli on stage to start the second part of the recital. Geldi Nejad, known in Turkmenistan as Oghlan Bakshi (loosely translated as “epic child bard”), is perhaps the most prominent performer of traditional Turkmen dutar playing and singing in the world. The Turkmen dutar is a two-stringed lute-like instrument that dominates the traditional and popular musical landscape of Turkmenistan and is often played with the fingers in specific rhythmic cycles unique to the country.

Although Turkey and Turkmenistan are separated only by the Caspian Sea, Azerbaijan and Armenia, their traditional musical cultures have not interacted in a public capacity, to the best of the performers’ knowledge.

“It’s very interesting because they are two different worlds [now]said Geldi Nejad. “Of course, if we look deeply into the history of these two peoples, they go back to the same tribe: the Oghuz. But [over] when the context of the music changed.

These differences would become apparent when Geldi Nejad started to accompany Aydinli for the second half. Almost immediately after the start, the chapel filled with the sound of rapid melodic pulses in complicated musical meter. One string of the dutar would resonate in a lower, drone-like pitch while the other would outline a melodic phrase that changed much faster than Ridvan’s previous playing. This small difference in tone and mood could perhaps be attributed to functional differences between the traditions.

“The music that Ridvan plays…is a kind of ritual [music]but the big one [musical] context in Turkmenistan plays for the events [that celebrate life]like weddings or birthdays,” said Geldi Nejad.

While Aydinli’s musical practice is firmly rooted in a type of sacred praise, Geldi Nejad’s musical culture is traditionally one of human function and celebration. However, this difference has not stopped either performer from exploring the musical fusion of their practices. In fact, it seemed to make their synthesis even stronger. After the dutar’s short introduction, Aydinli launched into a half-improvised, half-planned chant. Aydinli expanded the growing musical texture by introducing a large hand drum to provide more rhythmic support, ultimately transforming the sound of the two-person band into that of a full ensemble.

This balance between ney, dutar, Turkish and Turkmen voices, hand drum and their respective musical traditions was the dominant focus of the second half. A number of composed and improvised pieces were exchanged, with the two musicians meeting in the middle depending on the culture from which the piece originated. The darker, more minor melodies of the Turkish sacred tradition were not only supported by the brighter playing of the dutar, but also expanded the expressive possibilities of the brilliant colors of the ney by introducing the faster musical movement of the Turkmen tradition into conversation. . The same applies to the practice of Geldi Nejad, the ney adding a soft and airy atmosphere to the extremely active rhythmic cycles played on the dutar.

After exchanges of pieces, the concert ended with a longer joint improvisation in various Turkmen mukams, the analogue of the Turkish makam. This last piece was much more rhythmically active than the previous works, and each musician put forward his own skill. Aydinli’s ney playing brilliantly complemented the increasingly complex dutar patterns, and Geldi Nejad’s melodic phrasing brought out new melodies in the ney’s upper range. This successful blending of musical cultures offered an exciting conclusion to this enriching and multicultural recital.

Manuel Perez III can be contacted at [email protected]