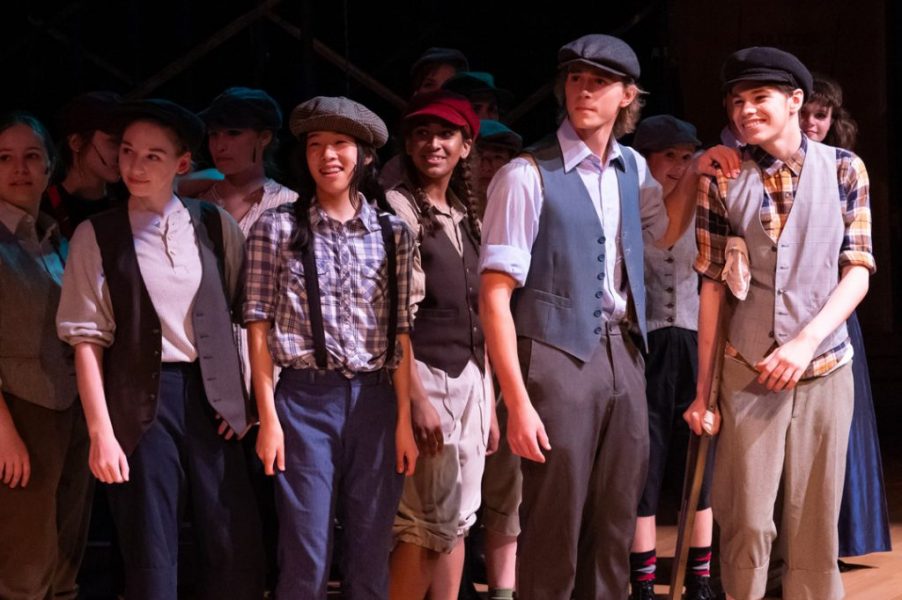 “Disney’s Newsies The Musical” is a heartwarming spectacle based on the News Boy Strike of 1899 and the 1992 film. The Broadway musical was nominated for eight Tony Awards and won two: Best Musical Score with Music by Alan Menken and lyrics by Jack Feldman, and Best Choreography for Christopher Gattelli. Harvey Fierstein wrote the book based on the film script by Bob Tzudiker and Noni White.

…a perfect show for young actors and audiences…

The story follows Jack Kelly (Kyler Neville) and his ragtag crew of friends, including Crutchie (Wyatt Unrue), Les Jacobs (Jane Keifer) and David Jacobs (Henry Carter), as they fight to make their voices heard. . The conflict begins when the publishing house The world, owned by Joseph Pulitzer (Hadyn Dollery), decides to increase its revenue to compete with the competition. Newspaper sellers (and the girls), already struggling, face poverty as the town’s publishers decide to increase their income by exploiting the children who sell the newspapers. The children are aided by rising journalist Katherine Plumber (Gwendolyn Ihde). In all the boroughs of New York, the newsies regroup to try to create a union. They persevere though they are hunted down, beaten up by cops and thugs, and taken to “The Refuge”, a corrupt juvenile center. Not letting their voices be silenced, Jack and his friends find an old printing press and publish their story. Soon after, crowds gather outside, enraged by the cruel treatment of child labor and unfair wages.

Currently at Capital One, this production of “Disney’s Newsies The Musical” is presented by the Reston Community Players (RCP) Apprentice Program which consists of high school students. The program gives young artists the opportunity to work in a professional environment. Here, students can receive training on how to conduct a show on and off stage. The cast, which numbered 25 people, was perfectly showcased by the production team. Program co-directors/choreographers/founders Alisa Claire and Brian Collier led the cast to use clear intent, direction, and bold choices.

A perfect example was Jane Keifer, who had the audience laughing with her sassy portrayal of Les. Additionally, the work of musical director Merissa Driscoll allowed the cast to showcase dazzling harmonies, especially Wyatt Unrue who harmonized beautifully as Crutchie. The team steered clear of the typically male cast and showcased each student’s different strengths. The fun and complex dance numbers featured solos for standout dancers like Elizabeth Cha and Myiah Miller, while also appealing to the varying skill levels of their cast. Students who were stronger in acting were able to show off their range in multiple parts or experience combat on stage.

The RCP program stands out from many others in the DC metro area because of its dedication to off-stage education. The apprenticeship program also includes seven technical apprentices who were able to gain first-hand experience working behind the scenes with professional equipment. This program is perfect for any developing theater artist who wants a taste of professional theater.

The staging of this show could not have been successful without the help of the creative team. Costume design by Lori Crockett saw the reporters in a purposeful and assorted disarray representative of their situation. They sported muted reds, deep greens and light blues with simple plaid patterns, while the upper class was saturated with silvery greens, blacks and striped browns. The set consisted mostly of blue scaffolding that rolled on and off the black box stage. The scaffolding allowed the directors to create various structural obstacles during chase scenes and featured a black and gold door for reporters to protest. The world. The gloomy, hard metal of the scaffolding underscored the lack of safety and warmth that these child laborers faced on a daily basis. The blue paint was a little awkward because it didn’t match the mood of the world the creative team was building.

It’s a perfect show for young actors and audiences who can relate to the helplessness of not having a voice in society, and the strength and courage it takes to stand up to the kingpins of the “world” – literally.

Duration: 1h30 with an intermission.

“Newsies” runs through July 17, 2022 at Capital One Hall, 7750 Capital One Tower Road, Tysons, VA 22102. For tickets and information, click here. NOTE: All patrons must wear a mask in the theater to attend a performance.