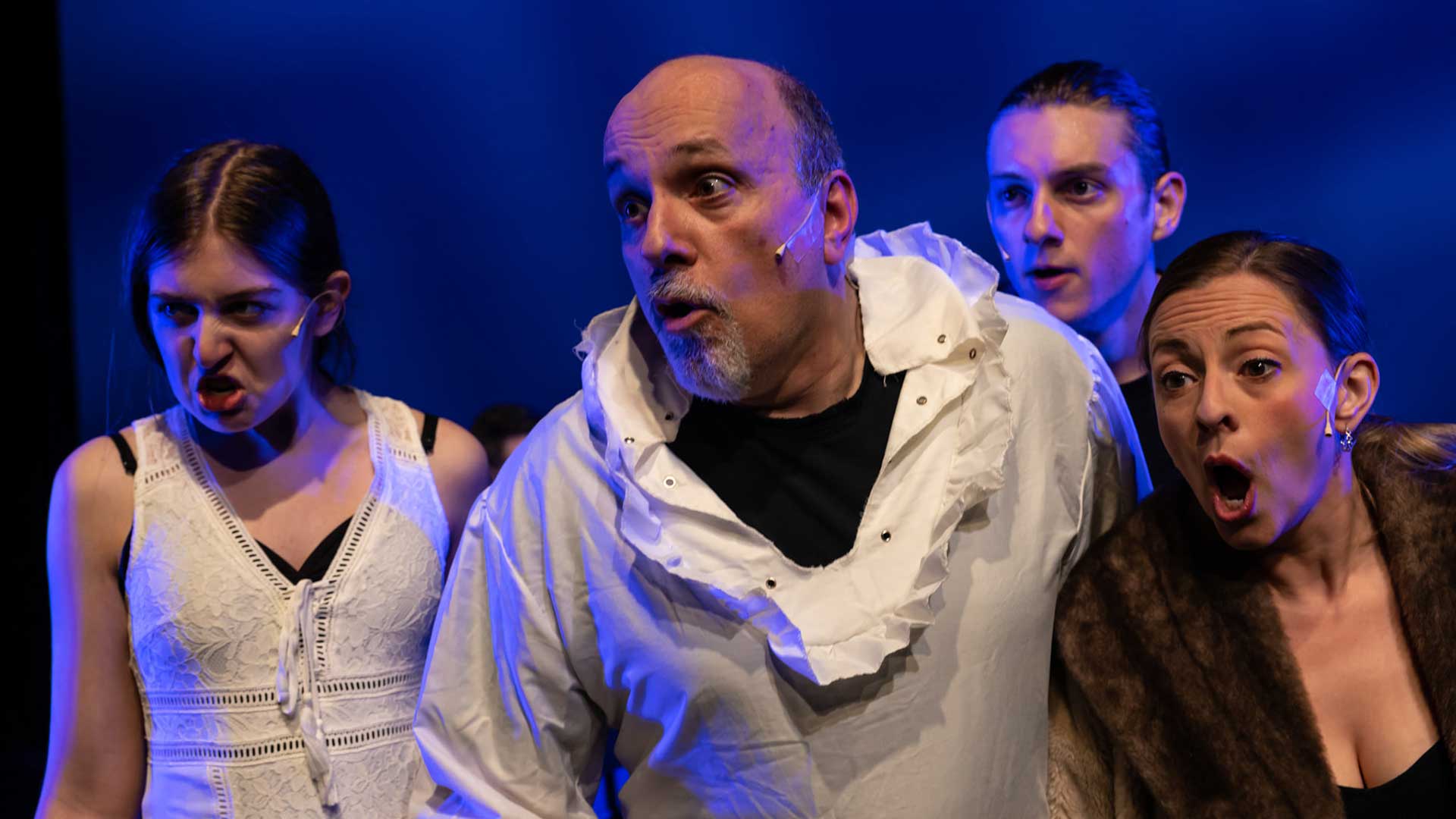 The Evolution Theater Company’s 2022 season kicks off this weekend with a rousing production of the bubbly, loving parody The Musical of Musicals: The Musicalwith book by Eric Rockwell and Joanne Bogart, music by Rockwell and lyrics by Bogart, directed by Joe Bishara.

Jonathan Collura, behind a piano at the side of the stage, leads the action as narrator and musical director, offering wry commentary on the action while deftly switching between beats and genres in a way as delightful as transparent. Matt Piper and Nat Harper play a series of young lovers (Piper’s characters have all named a variety of William and Harper a certain shade of June). Tom Cardinal plays an owner in each of the sketches, with variations on the name Jitter, representing authority figures across the worlds we’re treated to a glimpse of. Lisa Thoma covers all of the other adults the characters interact with, named with shades of Abby.

The shameless delights of The Musical of Musicals come with how Bogart and Rockwell mix songs and nod to the characters and themes of his five sketches, complete with a brief intro and ending. The opening sequence, “Corn”, gets its backbone from Oklahoma and nods to the rest of Rodgers and Hammerstein’s oeuvre, including a beautifully executed ballet with particularly strong work from Harper. Piper soars through the score’s nods to the way R&H characters slip into Americana Opera, “Looks like it’s time for a soliloquy,” even as Cardinal and Thomas point out the raw beats and experiences that have made this work so fresh and so often imitated.

The most striking mix of elements for me was Sondheim’s riff, “A Little Complex”, which slams Sweeney Todd and Company with flashing clues of sunday night music, and a few others. Cardinal shines here – and as the Phantom Jitter in the hilarious Andrew Lloyd Webber poke “Aspects of Junita” – in stellar showcases for his rich voice and physical comedy.

Kander and Ebb/Fosse’s “Speakeasy” sequence leads Chicago and Cabaret through the collar through a series of fun house mirrors, casting shadows of spider woman and other elements, again making excellent use of Harper’s Dancing and the contrasting vocal textures of Harper, Piper, Cardinal and especially Thoma in one stunning number.

One of the key elements that makes The Musical of Musicals as fun as it is, that’s the meaning of brutal play. Anyone who loves something, like the art form of musicals, has an equally passionate list of things that drive us crazy or much-loved shows we hate – and that recognition, that smiley, playful sense of “Okay , it was ridiculous even before we turned up the volume”, with exaggerated and extended leg movements in light choreography by Jamie Markovich McMahon, with a raised eyebrow and a smirk from Collura, and with split looks that push the elastic fourth wall but never quite break it.

The beauty of the voices and the fluid movements also keep the game grounded and amplify the cartoonish quality. Bishara’s management gets things done at a sometimes frantic pace, but never gets frantic, never buries a joke. This fluidity has a perfect partner in Collura’s encyclopedic knowledge of musical theater and piano, shifting from genre to genre as easily as he breathes. The Musical of Musicals is a delightful evening for people who love musicals of all kinds and have hated one or two.

The Musical of Musicals runs until May 7 at the Abbey Theater in Dublin, with performances at 7.30pm on Wednesdays and Thursdays, 8pm on Fridays and Saturdays and 2pm on Sundays. For tickets and more information, visit evolutiontheatre.org.