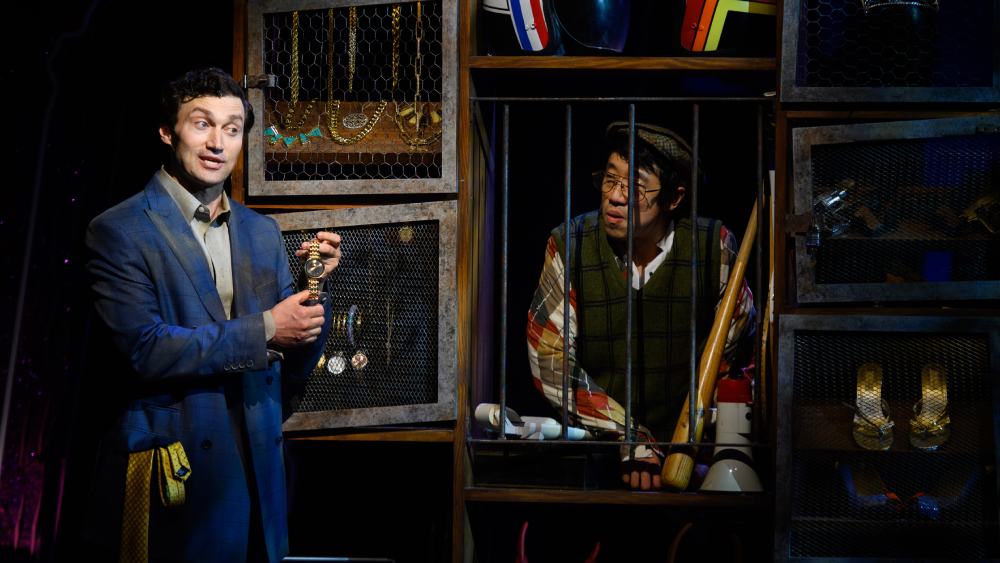 After the Great Recession of 2008 — not to mention the anxiety of today’s economy — will a Reagan-era comedy about insider trading and the glory of greed get the same laughs? Can he sing too?

In the 1983 film “Trading Places,” the life of a financial manager is changed to that of a Philadelphia hustler when two rich and dirty commodity brokers – the Mortimer brothers and Randolph Duke – make a nature-vs-culture bet. and puppeteer their secret social experiment. The same prince-and-pauper plot scheme applies to the latest film-musical treatment premiering this month at Atlanta’s Alliance Theater, which last kicked off the joyful “The Prom” in New York. – and before that, the less successful “Tuck Everlasting.”

But this slimy switcheroo still has a long way to go before it becomes a safe bet on Broadway. At this point, it’s lopsided in its tracks, inconsistent in its tone, and uneven in its comedy and tunes, all while managing to deliver some fun along the way.

In the film, Eddie Murphy’s cheeky crook stole the show from Dan Aykroyd as Louis Winthrope III, the preppy financier dug out by the manipulative brothers (played on stage by Marc Kudisch and Lenny Wolpe). But here, Bryce Pinkham – who knows a few things about the privilege of starring in “A Gentleman’s Guide to Love and Murder” – dominates as Louis. It’s delightfully ridiculous, even when given mediocre material.

Pinkham also has a grandiose voice and delightfully pokes fun at the eclectic but mundane tunes of Alan Zachary and Michael Weiner, especially the soulful, witty “What Time Is It in Gstaad?”

The role of Billy Ray Valentine — whom Murphy played with comedic abandon — is now gender-reversed to Billie Rae (Aneesa Folds, who was so good at improv “Freestyle Love Supreme”). But Folds, with a character that has been softened and sentimentalized, has no room for comedic riffs. With little daring and daring, she has no chance of making a strong impression. Folds’ singing chops are impressive, but his 11 o’clock number, the generic anthem “Not Anymore,” doesn’t feel deserved.

Part of the problem is that the musical feels constrained by the film’s convoluted and absurd plot – not to mention the tutorial on the fluctuations of the orange crop futures market. At least the second act has a greater sense of energy and fun once the revenge kicks in.

Thankfully, the film’s slurs and blackface have been scratched and some contemporary sensibilities added, though the story remains set in the 80s. Prostitute girlfriend Ophelia, who comes to the rescue of Louis – played by Jamie Lee Curtis in the movie – is now a sweet Puerto Rican drag queen (Michael Longoria). Louis’ bland blonde fiancee Penelope (McKenzie Kurtz, very good) gets a little feminist facelift, but the character’s continued commitment to the plot feels superfluous. Wildly eccentric Josh Lamon turns the villainous Mr. Beeks into something out of “Beetlejuice.” It’s totally weird, but at some point, anything that pops up and gets laughs is welcome.

Wolpe and Kudisch are solid as manipulative brothers, Kudisch having a libidinous amusement in a number with Longoria and a floor polisher. Breaking the fourth wall to introduce both acts to audiences is Don Stephenson as bewildered butler Coleman, a clever device that might have solved some of the exposition issues. Also missing is a musical connection between Coleman and Billie and between Billie and Louis.

Director Kenny Leon oversees this hodgepodge of styles and sensibilities but keeps things moderately lively. The Beowulf Boritt set features several splendid design elements (including a nice nod to the Dukes of the film), a few rudimentary elements, and a neon puzzle.

Fans of the film may enjoy revisiting certain lines and scenes, but at this stage of the musical’s development, the move to the stage isn’t a swap.