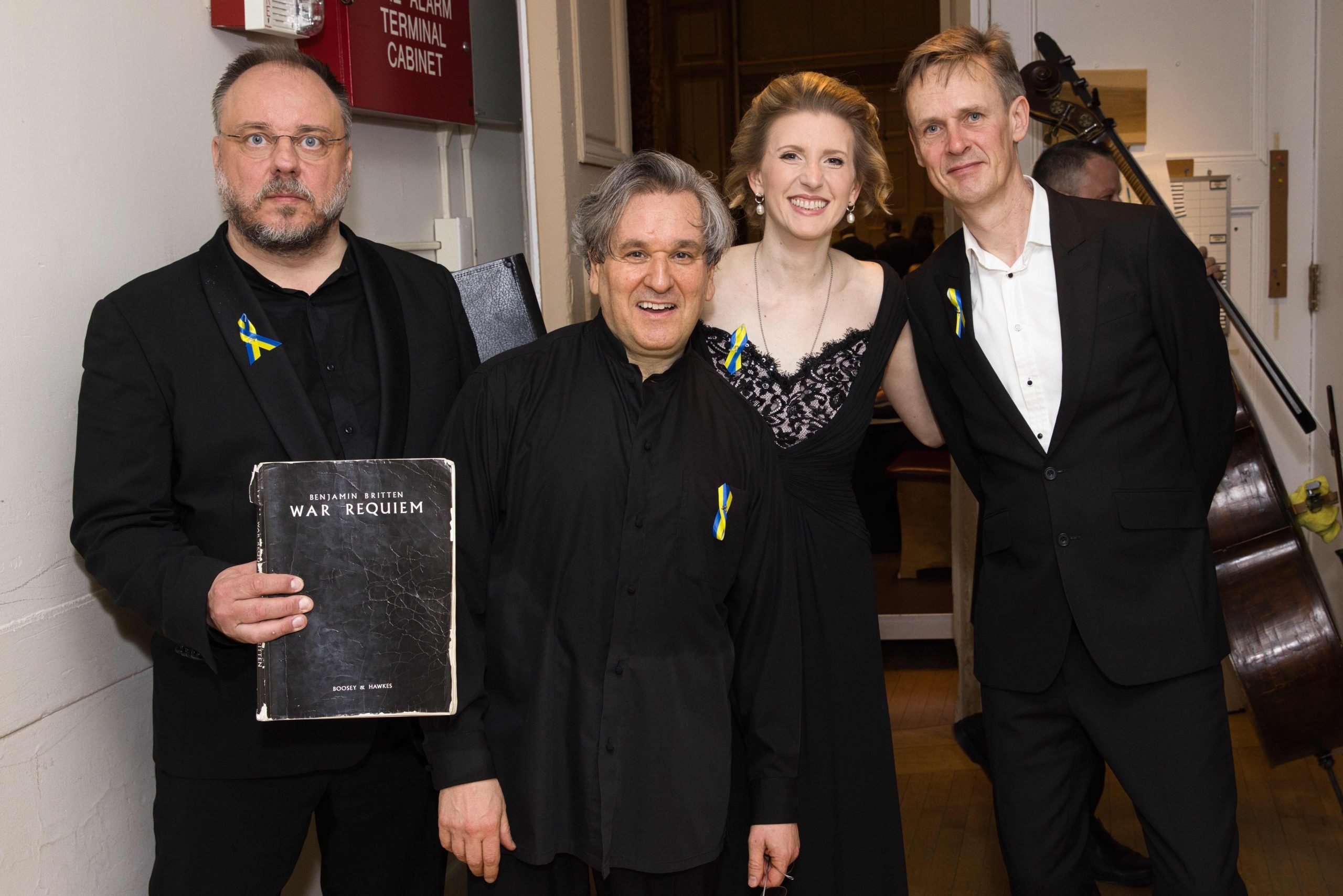 Unfortunately not a requiem for war

In what can be considered a paradigmatic example of accidental foresight, the Boston Symphony performs the masterful work of Benjamin Britten requiem of war in the face of a real war. If, as Wordsworth asserted (and Eliot denied), poetry is an emotion remembered in quiet, then this week’s gigs could be poetry remembered in the heat. Hold that thought.

During the 1940 Air Battle of Britain, the industrial city of Coventry received unwelcome attention from the Luftwaffe in a series of bombings so devastating that the Germans coined a word for it, geoventriet (past participle, we suppose, of Co-Ventrier). The 14and Saint-Michel century gothic cathedral church, reduced to a shell still standing. The destruction of Coventry was itself the probable motivation for the Allied firebombing of Dresden in 1945. After the war a new cathedral (retaining the dedication to St. Michael) was built next to the old one, and Britten was commissioned in 1958 to compose something for his consecration in 1962. That Britten was a pacifist and conscientious objector during the war was well known; he even successfully opposed assignment to non-combatant duty.

The composer’s response to the commission was a massively orchestrated and intricately organized integration of the traditional Latin Mass for the Dead (with an insertion: the Dona Nobis of the Requiem Mass does not include, as Britten does, the expression “dona nobis pacem” from the standard mass text, sung, unlike all other Latin texts, by the tenor) with poems by Wilfred Owen, one of the famous war poets of the First World War, under a a form of textual commentary reminiscent of Bach’s Passions. The primary intention of requiem of war was the ultimate reconciliation of the hatreds that fuel and are fueled by war: in the end, we all sleep together. Although Britten dedicated the score to the memory of four friends who died during or because of the war, commemorating the dead is only part of its purpose. What was this objective? Basically, Britten did not distinguish between the circumstances of the two wars which he addressed both expressly and implicitly, nor between the participants of the two sides: he made clear his intention that, in the first, the three vocal soloists were to come from Britain (Peter Pears), Germany (Dietrich Fischer-Dieskau) and the USSR (Galina Vishnevskaya), an intention partly defeated when the Soviet authorities refused permission to travel to Vishnevskaya (ultimately, Heather Harper stepped in on short notice). The moral absolutism of Britten’s position was, is, and must always remain controversial. There may be a slight hint of ambivalence in its inclusion, in the Dies Irae, of Owen’s “Sonnet – On Seeing a Piece of Our Artillery Into Action”, in which the poet acknowledges the necessity of its use, before d ‘call the curse of God. on it once its work is finished.

Contrary to his ethical view, Britten’s musical structuring of the requiem of war is a marvel of subtlety and nuance, with performing forces divided between a full orchestra, a chamber orchestra, a full choir and a children’s choir. The choir (the trusty Tanglewood Festival Chorus), children’s choir (a pickup ensemble dubbed the “Britten Children’s Choir”) and solo soprano (in historical rhyme form, the originally scheduled Russian soprano Albina Shagimuratova canceled for reasons of health and was gloriously replaced by the American Amanda Majewski) sing the Latin texts (except for the inserted line mentioned above) and, with the exception of the children, are accompanied by the full orchestra; the children, backstage in the hallway outside the second balcony, were accompanied by a chamber organ). The male soloists, singing Owen’s poetry, were backed by the intimate sonorities of the chamber orchestra, here arranged in front and to the right of the conductor. The music of these different ensembles has also been sculpted for particular effects: overall the choir is monumental and strangely deadpan, with many signs of Stravinsky influence. Symphony of Psalms and Oedipus Rex; the children’s choir was, literally, distant (the balcony doors played like mutes, closed or opened for particular passages, a delicate attention). Britten acknowledged honoring some of the traditions of past requiems, notably in the fiery Verdian passages of the Dies Irae, but there were also unrecognized references that we perceived, such as Stravinsky, and also Beethoven. solemn mass in the Sanctus and even touches of Shostakovich. On the whole, the explicitly liturgical music is treated ironically and institutionally (it’s still wonderful music), while Owen’s poetry is staged with heartfelt harshness or tenderness, depending on the occasion. with Britten’s meticulous and obsessive attention to prosody and word-to-word inflection; we admit to having always found this often tangy aspect of Britten’s style, which sometimes neglects a great musical arc, a little off-putting, even if here the orchestral forces often carry this charge admirably. There is a central melodic/harmonic nodule of a tritone, in particular the notes C and F sharp, which underlie the musical structure, with a thrice-repeated harmonic progression from these pitches to a peaceful triad of F major. It is an “irresolution” which produces a consonance but not a place of rest; its use at the end, to “Requiescant in pace, amen” leaves much room for doubt. The cumulative power of the work cannot be denied, and it is rightly considered one of Britten’s greatest contributions to the art of music.

For performance, there can only be praise. Both Bostridge – who sang this part with the BSO in 2000 and in Pappano’s 2013 recording with the orchestra of the Accademia di Santa Cecilia in Rome – and Goerne were superb in both musicality and presentation (Goerne more operatically corporeal, Bostridge more precise in enunciation). Majeski, singing from the front row of the choir, under the direction of Britten (Vishnevskaya, eventually allowed to participate in the first recording, apparently vehemently opposed this positioning), was stellar in tone, expression and projection. ; we would have liked better logistics to have been designed so that she could join the other soloists downstage for the bows. The choruses were there: the clipped diction of the TFC in the Dies Irae was chilling. And Pappano caressed each phrase and carefully underlined the differences in expressive quality between the main orchestra and the chamber orchestra. It was a most impressive sight, even tipping this quondam skeptic towards at least modified enthusiasm.

Finally, we must shoot the weapon that we exposed in the first paragraph. Thursday’s performance (though not, we’re told, any of the others en route) began with a full-voiced rendition of the Ukrainian national anthem by the orchestra and choir, to equally enthusiastic approval. public. [the BSO has done our own national anthem at Symphony Hall on just four documented occasions—3 in 1918-1919 and one in 1944]. That said, if the attendees on either side of the stage had given more thought to the value of Britten’s work, could they have paused, or at least offered equal time to the Russians? The latter could well have been greeted by a stony silence in court, but still. Did Britten notice the irony? As noted, it was poetry collected in the heat. Heat can do to poetry what it does to vitamin C.

Vance R. Koven studied music at Queens College and the New England Conservatory, and law at Harvard. A practicing composer and lawyer, he served for many years as President of the Dinosaur Annex Music Ensemble.