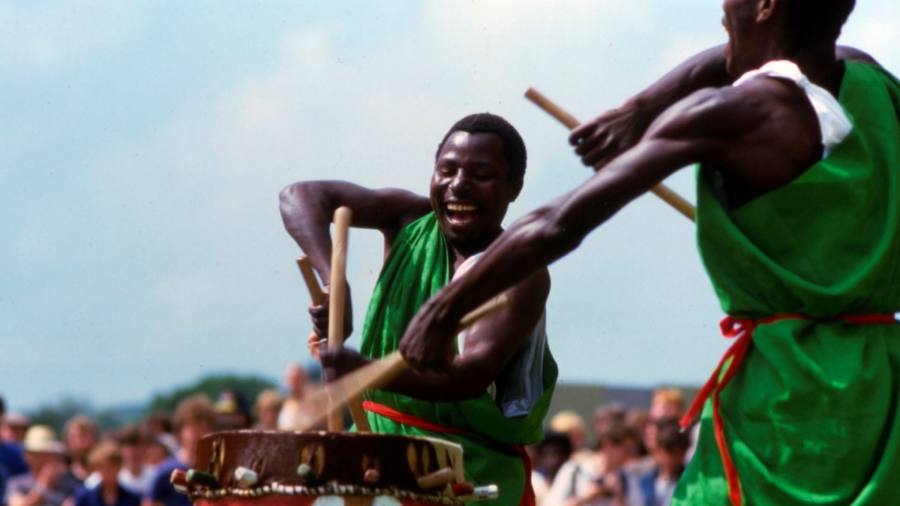 Forty years ago, the first Womad Festival was an artistic triumph and a financial disaster. Against a backdrop of war, economic turmoil driven by high inflation and railroad strikes, it spooked local farmers, outraged headteachers, left a string of disappointed creditors and led to the sending of threats of death to its most prominent founder, Peter Gabriel.

But in the years that followed, the World of Music, Arts and Dance and its associated foundation flourished. Today, its leaders are confident that, despite the overall state of the world showing some similarities to 1982, this year’s anniversary festival will celebrate its legacy and look to the future. As always, it will offer “world music” – everywhere from Korea to Comoros.

After the last two years, and given the recent new waves of Covid-19, it was not always certain. For Paula Henderson, Womad’s booker, the situation was “touch and go” until April: “Once we knew Glastonbury was coming, we knew we were gone. Now all we have to to worry about is the weather, rail strikes, airlines and visas.

Henderson has struggled with the fallout for the past two years. In 2020 Womad was canceled on a few months notice, like the rest of the UK festival season. For 2021, she recruited an all-UK based roster of actors – again with a global theme – only to see that also canceled when Womad was left out of government insurance support for festivals. So for 2022, his task has been to consolidate as many disappointed musicians from both years as possible into one program.

“Some of them have been releasing albums for two years now,” she says. Indeed, Angélique Kidjo, who was hired to perform her West African recovery of the Talking Heads album stay in the light, has released three albums since. Henderson is proud of its headliners – in addition to Kidjo, there will be sets from Kae Tempest, The Flaming Lips, Fatoumata Diawara, Gilberto Gil and Nitin Sawhney. But she is especially enthusiastic about the artists that many spectators will meet for the first time: she distinguishes B. Dance, a dance troupe from Taiwan, the shamanic root pop of ADG7 from South Korea and the Ukrainian group Folknery, which cycling around the world to find inspiration for songs.

Thomas Brooman was one of the founders of the festival, having impressed Peter Gabriel as a “probable boy” when he interviewed him for the Bristol Recorder, a local music magazine. He then spent 25 years as artistic director of Womad. Forty years ago, he reserved numbers for this first festival. Although over the years Puritan diehards of world music have periodically complained about the presence of Western acts, the original ethos was to “invite nationally known pop artists to bring their audiences” to foreign musicians. The first bill included Gabriel (twice, the second time with Shankar and Stewart Copeland), Simple Minds, Echo and the Bunnymen and The Beat. Broman found space for the Thompson Twins but turned down the Stranglers – “I didn’t think they were doing well.”

Alongside the British artists, the stages of the Bath and West Showground in Shepton Mallet have hosted The Musicians of the Nile, the Tian Jin Music and Dance Ensemble of China, Salsa de Hoy and others. Among the most notable were performances by the Drummers of Burundi – it took, says Brooman, a “small miracle to get them here” – both alone and in collaboration with Echo and the Bunnymen, brokered by the band’s drummer, Pete of Freitas.

Live in Womad 1982, a new double album of recordings recently unearthed from the first festival, includes the moment when Ian McCulloch announces “We are Echo and the Burundians” and then, with some audible shifts as the Liverpudlians pick up the rhythm of the drummers, the musicians launch into a version of “Zimbo (All My Colours)”.

This was Womad’s first high profile collaboration; it wouldn’t be the last. The record as a whole features curious juxtapositions: ‘Promised You a Miracle’, Simple Minds’ brilliant new single, sandwiched between The Chieftains and Ekomé’s Ghanaian drums; The Musicians of the Nile followed by The Beat and Pigbag. Gabriel launches “I Have the Touch” (its parent album is still a few months away from its release) and reinforces “Biko” with heavy Ekomé rhythms. As the album shows, this first festival contained the seeds of everything that was to follow.

Gabriel sadly describes the 1982 incarnation as “one of the most exciting experiences of my life and also one of the most horrific”. His former band, Genesis, cleared the debt by reuniting with him for a one-time benefit concert. The following year, a series of concerts at the Institute of Contemporary Arts in London organized by the Womad team proved capable of attracting the public and the festival revived. Until Covid it was held every year after 1985 in the UK and occasionally rolled out to Spain, Sicily, the US and Abu Dhabi.

Nitin Sawhney, one of Saturday’s headliners, is an avid Womad citizen. “I’ve never hidden the fact that I never liked the term ‘world music’,” he says. “I find this cliché rather simplistic, a form of cultural apartheid. But the “World of Music, Arts and Dance” — what I like is that it’s a party without any apartheid.

Sawhney has performed at Womad festivals around the world, including its outposts in Australia and New Zealand. Artists have been known to fly in and out by helicopter, but his practice is to “indulge in the whole experience, stay and watch it all.” He raves about the performances of Amadou and Mariam, Toumani Diabaté and Sinéad O’Connor (“I had worked with her but I had never seen her in concert”). He remembers being struck by new discoveries, such as Spanish singer Concha Buika and Malian ngoni player Bassekou Kouyaté, and continued to work with both.

This year, he predicts the appearance on Sunday of British sitarist Jasdeep Singh Degun, of whom he was the mentor: “One of our greatest musicians in the country”. Sawhney’s own set will draw inspiration from his 2021 topical album Immigrantsas well as looking back at his groundbreaking records Beyond the skin and Prophesy, now two decades old. Summarizing Womad, he simply says, “I feel at home.

Womad audiences, Henderson says, are “passionate and owners” of the festival. “Many have been coming for years. Some of them won’t be back to a gig until they arrive in July. We have a responsibility to them. We are so excited that we are nervous!